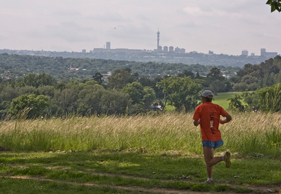 The parkrun
idea was born from misery. When South African expat Paul Sinton-Hewitt was
training for the London Marathon in 2004, he over-cooked the training and ended
up with a serious injury. But once a runner, always a runner, and Paul decided
to do something that would keep him involved in running – and something that
had not been done before in England.

“I
remembered the Rocky Road Runners Time Trial that takes place every Saturday
morning. The simplicity of turning up without pre-registering, taking part and
then recording your own name in the results when you finished was the starting
point for parkrun. I wanted a weekly event over a short distance that didn’t
need much in the way of volunteers, and where the results would be universally
available so that runners could compare their performances,” says Paul.

Paul
organised his first parkrun in October 2004 in Bushy
Park, London, with 13 runners and the first two
years were used to learn what worked. In January 2007 the second event was
introduced, and by then Paul knew there would be more. “Since then I have been
overjoyed by the uptake from the communities across the world.”

?
The
distance is 5km as this is a manageable distance for most, yet it is a distance
that even elites can use to work on their speed.

?
No
traffic cops are required as the runs take place inside parks or nature
reserves, in open fields or on seaside promenades.

?
People
of all ages and abilities can take part – even Olympians have joined in – but
the main goal is to get first-time runners involved. Therefore, most runs start
at 9am on Saturday mornings.

?
All
you have to do is register online and receive a barcode which you will keep
forever and can use worldwide.

?
The
runs only get cancelled due to bad weather or when major events are held in the
chosen park.

?
No
water tables are provided, which means minimum staff. You take your own water
bottle and run or walk with it, or leave it at the finish area.

Bruce ran
the London Marathon
last year and met up with his old friend Paul, who had been one of his seconds
during his Comrades heyday, and who now invited him to a parkrun. “It was the
day before the marathon. When I saw about 250 people lining up, I thought these
youngsters are not going to beat me! I finished 18th that day.”

Bruce was
hooked and started chatting to Paul about bringing the concept to South Africa. The
first parkrun SA was held at Delta Park in Johannesburg
in November, with 11 runners. Since then, more than 200 runners have registered
and regularly run the Delta
Park course. Bruce’s
wife, Gill, is administering the parkrun SA website and is in the process of
training volunteers to help her.

“This is
such a great concept!” says Bruce. “Even guys who travel to SA on business have
joined our parkruns, as they don’t want to miss out on accumulating as many as
possible. The great thing about park running is that it offers something for
everybody.”

THE INS AND OUTS

One of
the best things about parkrun is the ‘no fuss’ system. You simply pitch up,
listen to a few safety announcements and off you go! And within 20 minutes of the last runner finishing, everything is packed
up and the area is cleared. The only bit of administration is the barcode,
which records what position you finish in. Then within an hour of running, you
can compare your time and ranking online against fellow runners, those in your
age group and even those that ran worldwide on the same day, says Gill.

Regular runners are rewarded with a
red 50 T-shirt while those who complete 100 parkruns receive a Black 100
T-shirt.

“The
simplicity of the parkrun formula and the fact that we are free to everyone to
take part is the winning recipe. Everything we do is without commercial bias.
Of course, it costs money to build an organisation and have so many events, and
for that we need sponsors. However, we have crafted a careful, respectful
relationship with our sponsors and backers, so that the commercial aspect is
underplayed,” says Paul.

WHAT
YOU WAITING FOR?

Parkrun is set to take SA by storm,
says Bruce. He has had many queries from runners wanting to start parkruns in
their local communities and neighbourhoods. “I believe park running is the
nursery for many a good runner.”

Paul agrees
and says with such a large active community in South Africa and with so many folks
finding it difficult to cover the costs of paid-for races, this formula will be
successful. “All I have ever wanted for parkrun was that we offer people a
chance to better themselves. Parkrun builds communities, and while it is doing
this, people become fitter, healthier and develop better friendships.”