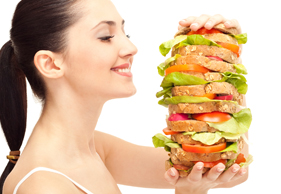 White
bread, brown bread, in fact any bread… more often than not it is blamed for
many health problems, including weight-gain and gastrointestinal discomfort. Although
bread can be a contributing culprit, it is not the only food item that can be
blamed, and I strongly believe that bread in moderation – and the right type –
can be part of a healthy balanced diet.

The
human body is designed to run on carbohydrate and naturally has a ‘sweet
tooth’. However, humans have found a way to cheat nature and isolate the
sweetness of foods, but these foods are too sweet for our bodies to handle. All
forms of concentrated sugar – white sugar, brown sugar, malt, glucose, honey
and syrup – are fast-releasing, causing a rapid increase in blood sugar levels.
This sugar is not required by the body and eventually the excess sugar is
stored as fat. Most concentrated sugar is also devoid of vitamins and minerals,
which can lead to altered metabolism, low energy and weight problems. Refined
carbs such as white bread, white rice and refined cereals have a similar effect,
releasing sugar into the blood rapidly and causing your blood sugar balance to
soar and drop.

Balancing
your blood sugar is probably the most important factor in maintaining even
energy levels and weight. If your blood sugar level (glucose) is too high, the
body converts excess energy to glycogen (short-term glucose storage) or fat
(long-term glucose storage). When levels are too low we experience symptoms of
fatigue, poor concentration, irritability, nervousness, depression, sweating,
headaches, digestive problems and hunger. If you control your blood sugar, you
have more stable energy levels and can control your appetite and weight.

One
of the most common ways we now eat carbs is in the form of grains, especially
wheat. We eat cereal for breakfast, sandwiches for lunch and pasta for dinner,
which all contain wheat. The most common protein in wheat is gluten, and gliadin,
a sub-set of gluten, is found to be a common intestinal irritant and can cause
allergic reactions. So that is one of the reasons people feel so much
‘lighter’, less flatulent, and higher in energy, when they reduce their bread
intake.

ARE ALL BREADS EQUAL?

Some
bread is made from more refined white flours versus whole grain, more complex
starches that result in a slower release of glucose into the blood and thus
don’t surge blood sugar levels. Also, different types of grains contain
different amounts of gliadin. For example, the flour made from the grain of
oats does not contain gliadin and thus is less irritating on the gut. In
general, the more whole grain and less refined the bread, the better.

HOW MUCH BREAD IS OK?

Everyone
has a personal tolerance of how much gluten/wheat they can digest without
getting symptomatic. The same goes with maintaining blood sugar levels: If you
eat too much (even if it’s slow releasing carbs) at one setting, the load of
sugar is going to be too much, resulting in too much glucose in the blood,
causing rollercoaster blood sugar levels.

Generally,
a good rule of thumb is never eat more than two slices of bread per day, and try
not to do so every day. If you are going to eat bread, choose more
complex, unrefined sorts like bread made of whole grain rye and oats. Remember,
balance is key!