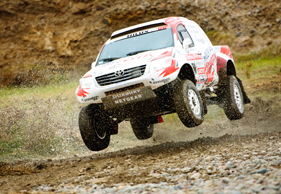 When most of
us think about racing car drivers, we imagine them getting behind and the wheel
not doing much else. “Racing is hard on the body. You have to be physically and
mentally strong,” says Giniel, who competed in his first race on Killarney
raceway in Cape Town back in 1989. Shortly after that, he joined a racing club
and participated in countless group races.

Giniel made
the switch to off-road racing in 2001 when Nissan decided to punt its off-road
4×4 vehicles. He decided to take his driving to a new level and his talent
showed with a national off-road championship win. After his switch, Giniel’s
talent proved its worth with an immense win at the Moroccan Rally in 2006 as
well as top 10 finishes in the Dakar from 2003 to 2006.

In 2009, Giniel
won the Dakar Rally, which he calls “the toughest race in the world,” with
co-driver Dirk von Zitzewitz and his then partnership with Volkswagen. “A lot
of things can or won’t go your way,” says Giniel who felt relieved to win after
coming second two years earlier. “It was an incredible, indescribable feeling. The
race was special,” says Giniel.

He placed
third in this year’s Dakar with his new Toyota partnership. The rally took
place in the sandy hills of Argentina, Chile and Peru, and he praises the
beauty of the race: “It’s stunning and there are some tricky dunes in Peru, but
it’s always a highlight.”

While a
sportsman or runner practices to become better at what they do, Giniel explains
that’s it a little different for a racing driver. “You have to practice, but I
can’t drive every day because it’s expensive, so I keep my fitness up so I can
always be tough.”

Giniel
often runs and goes mountain biking to keep his body in good condition. He
feels that physical strength ties closely to mental concentration, and both attributes
are needed when you’re driving for up to six hours a day. “When you’re fit, you
won’t get tired. When your heart rate is up past 170 beats per minute while
driving, you do feel it in your body. Therefore, it is so important to work out
and eat healthily.”

While
Giniel enjoys the travelling experience, he describes his worst experience on
route in the 2006 Dakar Rally. “On the Morocco border, there were some corrupt
government officials holding AK-47’s and we had to pay them a few to get past.
It’s not cool looking down the barrel of a gun!”

But this
does not mean Giniel is ready to retire. With a third place finish in the Dakar
this year, Giniel wants another win in the rally in the years to come. He is
confident with his new partnership with Toyota and is eager to pursue more wins
with the franchise. “I want more on the cards and I want to keep building
myself up, and that starts with keeping fit for the tough times.”