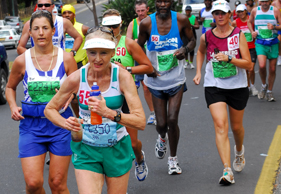 In 1982,
Ann Margolin and her husband Issy ran an 8km training run, and along the way they
met a man who went on and on about marathons. On that day, Ann ‘beat’ the
marathon enthusiast and thought that she could continue her newfound love by
running longer races. “I love the open air and I love the feeling of being so
free.” says Ann, still just as excited about her running as she was nearly 30
years ago.

She
embraced the Two Oceans and Comrades ultras, and and
singles the Comrades out as her greatest feat till now. She says she thrives on
the self-discipline this gruelling race requires. “I’ve never shown up
unprepared. You have to do your homework at Comrades,” says Ann, who describes
the atmosphere at the race as “infectious”. Last year, when she could not run due
to injury and attended Comrades as a VIP guest instead, she was amazed at the
continuous anticipation created. “I can sense the build-up even on the
sidelines. Some finish and it’s like they haven’t been affected at all,” she
laughs, “they just smile and wave. But I think it infects all walks of life.”

Ann says
that Comrades has been her saviour after being diagnosed with cancer in
late 2008 and undergoing unsuccessful surgery in early 2009. She was determined
to run the Comrades again just a few months later, even though she couldn’t
train properly. She says her mental attitude was not right for surgery, but she
was still plotting her running times, and was determined to finish the race
after having to overcome her diagnosis. “I needed to finish it to put life into
perspective for me,” explains Ann. “I finished three minutes earlier than I
planned. A calm came over me. At that moment, I knew I needed to accept what
had happened and carry on.” Acoording to Ann, that Comrades was her turning
point, ab she calls it her “leveller’, because that day everything “just
clicked.”

Her tremendous courage was recognised when she was
presented with a Goldfields
Spirit of Comrades Award in 2009 and was made to feel like a celebrity. “It was
like I was floating on a cloud. I told my family that all I wanted to do was bottle this
feeling forever,” says Ann.

Over the
past year or so, Cape Town-based Ann has been dealing with an injury that’s
kept her out of running. “I’ve been banging my head against the wall over this.
After a run, my back is in agony and no one can really pinpoint the cause,” she
explains. In 2010, Ann hurt her back while doing strength training and tried to
ignore it, but after that year’s Comrades, she had done further damage. “If I
run now I get sore, but I am not going to give up on this,” says Ann, who
remains positive and still hopes to complete her 30th Two Oceans in
April.

Most
frustratingly, Ann says her injury has kept her from training with Issy, who
like her also runs for Celtic Harriers these days after they both moved across
from Acsis VOB a few years back. She remembers one year running the whole
Comrades with Issy, from start to finish, and crossing the finish line hand in
hand – a rare feat for couples running the Big C together. “It’s a huge
motivation when you’re with the other, and you forget about your tiredness,” says
Ann.

Although
sad about not being able to run Comrades this year, Ann is still happy to lend
her wisdom to other runners, particularly when it comes to telling them to look
after their bodies, “Don’t do too much too soon,” she says, “think about what lies
ahead, and that you need to leave some of yourself in the kitty to run further
on in life. Don’t use all your power at once.”

Through the
years of running, Ann has overcome hardship, showing that nothing is impossible
if you keep on believing. And she says she is not going anywhere – running is
in her blood and she is prepared to rise above her injury. Hopefully we’ll see
her and Issy finish hand in hand at many a future finish line.