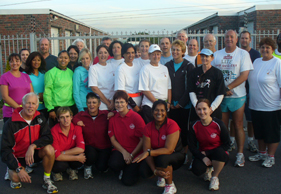 Head down to the Edgemead Sports Fields on a Tuesday evening for the Edgemead Runners time trial and you’ll see anything from 50 to over 100 runners and walkers lining up for either the 3km or 5km routes. Come back two days later and many weekends and you’ll see another horde of athletes heading out for a club pack run, and on both days you’ll be able to find at least a few first-timers in the mix. That’s because this club is growing at a proverbial rate of knots! “We have grown from about 180 members to just over 300 in the last year,” says club chairman Francois Gouws, “and we put it down to our FIGLERS group. Every week we see more new faces at the training runs and time trials, and it is all thanks to word of mouth spreading about the group.”

FIGLERS stands for ‘Fast Improving Gents and Ladies Edgemead Runners,’ and this is the club’s beginner training group. It is led by experienced runners from the club, members are supplied with training programmes and advice, and the group splits into two for its training sessions so that walkers can also join. The concept has proven a hit with the Edgemead community a well as the club, says Francois. “The FIGLERS bring a lot of enthusiasm to our sessions and it’s exciting to see some of them now serving on the club committee. Also, these days we have much higher number of members participating at most races, about 30 to 50 per race on average. That never used to happen in the past.”

With all these new members and the general enthusiasm in the club at the moment, he adds that it is the perfect time for them to finally get their own clubhouse. “We’ve shared with the Edgemead Cricket Clubhouse since the club was founded in 1992, but in January we will start building our own clubhouse next to the tennis courts at the Edgemead Sports Fields, and we hope to be done by April. These are exciting times for the club.”

EARLY DAYS
It all started in December 1991 when Patrick Fear, newly arrived in the Cape from Midrand Striders in the then Transvaal, put a notice in the Edgemead News calling for runners in the area to join a new running club in the area, offering local time trials and training runs. He compiled a list of interested people, then invited them to a meeting in March 1992. Thirty-six prospective members turned up and a volunteer steering committee was formed to go ahead with establishing a running club in Edgemead.

It was unanimously decided that the club would be called Edgemead Runners and would link with the soccer club in restricting the club colours to red, white and black. It was also decided that a weekly time trial would be held, commencing the following Tuesday, 18 March. Regular Sunday pack runs soon followed. The first club newsletter appeared in May 1992 and went out to 65 members, and the first race to see the new club vest in action was the Rainbow Chickens Half Marathon in Worcester on 1 August of that year.

One of the standout performances by a club member came in 1997 when Michelle Stewart broke the SA women’s record for 100 miles at the Hewat 100 Miler in Cape Town, clocking 17:42:08. In 1996 she had won the women’s title at the Washie 100 Miler in 18:45:34 to become the first Edgemead race winner, and her national record saw her awarded Western province colours – another first for the club.

NOWADAYS
These days the club has over 300 members and offers it members not only a weekly time trial and regular training runs, but also speed work and hill sessions, and even free Pilates classes on Monday nights. The time trial takes place at 6:15pm on Tuesday evenings (6pm in winter), starting and finishing at the sports grounds and offering flat, fast 3km and 5km routes. An 8km is also offered twice a month.

Two races are presented by Edgemead each year, the Womens Day Challenge 10km and 5km on National Women’s Day, 9 August, and the Runners Memorial Race 8km on New Year’s Eve, 31 December. At the Memorial Race, tribute is paid to all runners from all Western Province clubs who have passed away or been killed, with names read out club by club. Unfortunately, due to logistical difficulties, one of the club’s races no longer on the calendar is the Robben Island 15km, which was first run in 1992 when access to the island was still strictly controlled. It was a very popular event, with runners scrambling to secure one of the 250 limited entries and then predicting their finishing time and trying to get as close to that as possible without wearing a watch, with the winners being the closest finishers to their predicted times.

The club website is something they’re very proud of, although at the time of writing it was being upgraded. Not only does it contain all the club info, but also offers training programmes for every distance from beginner jogger to the Comrades – and members can e-mail the club’s virtual coaches for free advice as well. Most impressive, though, is that in 2009 the site became the first club site in South Africa to contain every single race result by every single member since the club’s inception. Weekly e-mail newsletters also keep the members up to speed on club matters and upcoming fixtures.

On the social front, the first Tuesday of each month is Club Night, after the time trial, with awards given for the previous month’s performances, and other social events include two annual pasta parties prior to Two Oceans and Comrades, and the family weekend away, which the club subsidises. The club gazebo is up at most of the big races as well as league races, and drinks and snacks are supplied to all members. As Francois puts it, “We have a great vibe in the club and love to welcome new runners and walkers to our group, so everybody is welcome.”