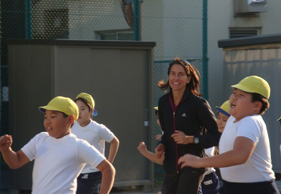 I was very excited when I received a late invitation to compete in the third Yokohama Women’s Marathon. For the first time, I was really looking forward to run this distance. At my previous two marathons, in Prague and at the World Championships in Daegu, I was very scared, as I did not know what to expect.

GETTING THERE
After 17 hours of travelling from Johannesburg, I arrived at Tokyo airport, where I was met by a chauffeur with white gloves and a suit. He drove me to my hotel in Yokohama where the organisers gave me a very warm welcome. I went straight for a massage to get the long flight out of my body and was treated to a 90-minute full body massage. Definitely my best sports massage ever!

That afternoon I went for a shake-out run to explore Yokohama and was very surprised to see how much the Japanese like their dogs – as pets, of course. Everybody walks around with a highly pedigreed dog wearing a jersey.

PRE-RACE PR
The next day, the organisers helped me overcome my jetlag by keeping me busy all day. I joined Salina Kosgei from Kenya and Alevtina Ivanova from Russia for a primary school visit. This was really one of the highlights of the trip, with 600 kids waving Kenyan, Russian and South African flags to welcome us. They sang a friendship song and wished us good luck for the race, and then we ended the day with an exercise session, and in the end I think I enjoyed the day more than the kids!

My agent Brendan Reilly arrived from the USA on Thursday evening and we had dinner at an Italian restaurant, as I was not brave enough to try any Japanese food as yet. Saturday I was under ‘hotel-arrest’ for the whole day because of severe rain, but in the afternoon, after our technical meeting, I faced the storm outside for another shake-out run to calm the nerves. I had dinner, mixed my energy drinks in my own designer water bottles and went to bed.

THE BIG DAY
Race day arrived and I had to force myself out of bed at 8am. I was very relieved when I looked through the window to see clear blue skies. The weather forecast for the day was 24?C and 66% humidity, not ideal for a marathon starting at 12:10 in the afternoon, but better than the severe rain we experienced the day before. I knew it was in my favour, as I had been training in 30?C temperatures in October, and my bad experience in the severe heat and humidity at the World Champs was also counting for me. That made me realise that a bad run only makes you stronger.

I was one of seven invited athletes from abroad, but only ranked 18th in the race, so I didn’t feel any pressure. My coach, Gerrie Coetzee and I decided that I would run a conservative race and stick to my own race plan of running 3:30 to 3:35min/km. It took a lot of self discipline, especially when a Japanese runner running in a skirt passed me after one kilometre! The course was pretty flat and we went out for 13km and back, passed the start for a 6km loop, before we passed the start again for the last 10km, which was 5km out and back.

The 25km mark haunted me, as this was where I lost contact with the leaders in Daegu. I clocked the fastest 5km split (17:27) of all the runners from 20-25km, and my 5km split from 25-30km was only three seconds slower than that of the leaders. I also feared the 32km mark, as long distance runners know a marathon actually consists of two marathons, the first 32km and the last 10km after hitting the wall, but my last 10km went well. With 8km to go I passed Alevtina and Ethiopian Robe Guta to move into fifth position and I managed to close the gap on the fourth runner from 1:35 with 7km to go, to only 16 seconds at the finish!

I AM A MARATHONER
This was my first pleasant marathon experience and I only had a bad patch after 35km, when I missed my special drink because my bottle slipped out of my hand. The last kilometre was pretty tough, as I got very nauseous, but I won’t go into more details for the sensitive readers. It is only by grace that I broke the 2:30 barrier by a second – and that half a second made a significant difference on my pay cheque!

I have been overwhelmed by everybody’s response and all the messages I have received for running a sub-2:30 marathon. I must confess, this was the last shot I gave myself at the marathon, as I was seriously considering returning to the track, but today I am proud to say I’m a 1 500m Olympian turned marathoner!

Ren?’s 2:29:59 was not only a PB by almost five minutes, but also makes her the fourth-fastest South African woman ever, with only Elana Meyer, Colleen De Reuck and Frith van der Merwe having run faster. It’s also the first time a South African woman has ducked under 2:30 since Elana and Colleen both ran 2:27s in the 1999 Chicago Marathon.