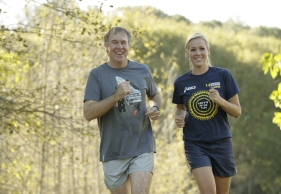 It all came about when an e-mail popped into Tim Noakes’ inbox late in 2010, advertising a book called the New Atkins Diet for You, which promised to help you lose 6kg in six weeks. This immediately piqued his scientific interest. “We all know that losing that much weight that quickly is impossible, but the book was written by a serious scientist, so I ordered a copy, and it said replace all carbohydrate in your diet with protein and fat,” says Tim. “I said to myself, they wouldn’t say this without reason, so I decided to experiment on myself. I cut all carbs out and started eating just biltong, cheese and fish, and in one week I lost three quarters of a kilogram. By the next week it was 1.5kg, and it was so easy. I had no hunger pangs. In the past I had tried to lose weight, but was always hit by hunger from the first day.”

Tim has now lost 15kg, and says just as easily as the weight came off, so his running improved. “The more I lost, the more I wanted to run. Before, I had only been able to run 30 to 45 minutes at 7min/km, but now I am running at 5:30/km, sometimes even under 5min/km. One particular run on the mountain used to take me 140 minutes – I got it down 92 minutes after just five months. Then I ran the Two Oceans Half Marathon in 2:06, 40 minutes faster than the previous year. In my view, it’s not just weight-loss, but also something in my energy levels. I feel like I’m 22 again, with endless energy, and I just want to burn it by running.”

FACING OPPOSITION
Naturally, Tim has been raving about his anti-carb diet, and unsurprisingly, he has received quite a lot of opposition to his new way of thinking. “I know that The Lore of Running is all about carbohydrate-intake, but think about it, I must have a reason to say this now. Using a normal ‘cut the calories’ diet, most of us will probably lose 1kg over a year, but by cutting carbs, people are losing 40 to 80kg – just imagine how that changes their lives. And they all say that the further they go, the stronger they get.”

“What I’ve learnt is that there are those who can metabolise carbohydrate and those who can’t, and your body becomes slightly more carb-resistant as you age. If you start putting on weight in middle age and your Body Mass Index (BMI) is 25 or higher, then you’re probably one of those who can’t. You can eat all the carb you like if you can process it, but if do and see gentle, persistent weight-gain, that is a problem.”

Tim explains that most athletes eat carbs, which contain glucose, to generate glycogen, the fuel for the muscles, but in the BMI 25+ group, chances are that the muscles and liver can’t take up the glucose normally due to this carb-resistance, and so the body over-secretes insulin to break down the extra glucose. However, there is too much to be broken down, because our diets contain so much carb and sugar, and so it ends up in our fat cells, thus resulting in weight-gain, and on top of that, we experience constant insulin and glucose spikes, which are damaging to our health. He adds that if we cut the current consumption of sugar in SA from an average 60kg per person per year to 5kg, which is about three teaspoons per day, we would get rid of most cases of obesity, diabetes, heart disease, Alzheimers and certain cancers.

PROOF IS IN THE PUDDING
“Ironically, the more fat I eat now, the thinner I get – I’ve replaced the carbs that make me fat with the fat that makes me thin! Nobody believes this until they try it. When you cut carb, you tend to replace it with fat, because you can’t eat that much protein, so you have to increase your intake of yoghurt and nuts to compensate. Essentially, I eat six food groups now: Nuts, full-cream dairy, leafy vegetables, meat, fish and eggs.”

“You have to understand that fat is actually a brilliant energy source, including for exercise and sport, but your body simply isn’t used to using it. It’s like putting diesel fuel into a petrol engine – you need to change the engine first. By cutting the carbs, you bring about this gradual engine change, and your body learns to burn more fat, which will result in both increased energy levels and weight reduction. It won’t work for the average 20-year-old, but if you’re older, have a BMI of 25 or higher and are gaining weight, you should give this a try.”