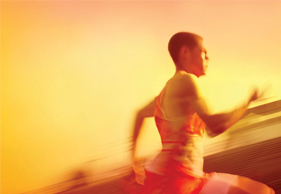 THE CASE FOR NURTURE
A running environment includes things like having friends and family that are runners, or some type of exposure to running, as well as motivation to run. Men and women don’t show much variation in their motivation to run, but environmental factors play less of a role in men. The reason for this is that women perceive more benefits from running, like having a more toned body and a better mood, whereas if a mother is taking care of children all day and is scared to run at night, she’s likely not going to run.

When looking at different age groups, the 10 to 19-year-olds have the highest motivation to run, because they are still young, full of energy, and don’t have as many responsibilities. We find that 20 to 39-year-old individuals have a little less motivation to run due to a more demanding life in which family, career and time play a role. They are generally still fit and healthy, and recover from injury and illness fairly easily, but there is a decrease in motivation to run as their energy supplies become less. There is, however, a sudden increase in the 60 to 69 category, because this is the average age of retirement, when people find more time to pursue their interests.

THE CASE FOR NATURE
Looking at genetic factors, several ‘performance genes’ have been identified, notably ACE1 and ACTN3, which play a role in blood pressure and muscle contraction and are assumed to be responsible for elite athletes’ abilities. I took a different approach and rather looked at ‘feel good genes,’ because after a run you generally feel so much happier and less stressed. Many athletes – not just runners – experience a ‘runners high,’ a feeling of euphoria, as if you can go on forever, and this is controlled by dopamine.

When you experience a naturally rewarding feeling, your brain needs to tell your body what is happening. This message is transmitted along your neurons, which don’t physically touch each other, as they are separated by a small gap called a synapse. The dopamine is released from one neuron, travels across the synapse and binds to a receptor on the next neuron, and it is at this point that you feel good. If dopamine has bound to all the receptors and there are no more receptors available, the leftover dopamine is taken back up into storage for future use.

So, I focused on genes involved in these two processes: The first one is called DRD4 and controls the dopamine receptors. The second gene was SLC6A3, also referred to as DAT, which is responsible for the re-uptake of non-bound dopamine. I studied these genes in runners and non-runners alike, and found that both groups have these genes. Now it is highly unlikely that there is one specific gene responsible for a complex trait like running motivation. Instead, it is possibly influenced by a number of genes, each contributing a small amount to the bigger picture. The results could, however, be explained by a newer phenomenon called epigenetics. Rather than looking at whether a gene is inherited, epigenetics looks at whether a gene is turned on or turned off. So it could be that runners and non-runners carry the same genes, with the difference being that the runner’s genes have been turned on by some sort of environmental factor that triggers their motivation to run.

AND THE WINNER IS…
So we see that nurture has the upper hand in motivating us to become runners, but nature can’t be ruled out, and the two usually work together in the process. At the end of the day, the main thing we get from the study is that if you have been brought up in a running environment, then you are more likely to become a motivated runner yourself.