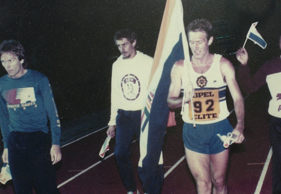 In November 1979, Deon Brummer was sitting on the border while doing his national service, listening to the sport news on a small radio, when he heard that South African middle distance athlete Johan Fourie had run a sub-four-minute ‘Dream Mile.’ It was then that he decided to give running a serious effort once he got back home. “I had run against Johan for the first time in 1977, finished third behind him in the 1500m and 3000m. I decided that if he could do it, so could I. It took me a few years to run 3:56 in PE in November 1984, and that first Dream Mile is one of the highlights of my career. I ended up running 20 sub-fours, which is the second-most by a South African behind Johan’s 53.”

Along with Henning Gericke, Deon and Johan were dubbed the ‘Middle Distance Firm’ in the eighties as they dominated the 1500m and mile events in South Africa. “We became close friends and really ran each other hard. For example, in 1987 I beat Johan in three consecutive mile races, and that spurred him on to set a new 1500m SA record at the SA Champs. He was my toughest opponent, and it felt good when I read here in Modern Athlete that he said I was the only athlete he was scared of.”

GOOD AND BAD
Deon’s competitive career lasted from 1980 to 1994 and included winning the SA 800m title in 1987 and the 1500m titles in 1988 and 1989. He is justifiably proud of the fact that he never finished lower than second in his many national champs races, and says another highlight of his career was earning Springbok colours for the first time. But it was the camaraderie and friendship that remain his favourite memory of those years. “The athletes were like a big, close family and many of us have stayed in touch, so when several of us had kids taking part in the SA Junior Champs three years back, I organised a mini-reunion. Next thing I knew we had 70 or 80 former athletes there – and more sent messages asking why they hadn’t been told about it. It really was a special group, and I’m going to organise another reunion soon.”

Deon says the only frustrating aspect of his career was not being allowed to compete internationally during his best years, due to the sporting isolation years, and then being past his best when the country was readmitted to world sport. “Even though I qualified for the 1992 Barcelona Olympics, I was not selected, because they didn’t take the older athletes. I did still go run in Europe, but I always found I couldn’t wait to get back to Africa and the wide open spaces.”

It is this love of the wild that prompted Deon to study nature conservation after school, and today he operates a 4×4 safari business called Basecamp Africa Safaris, which specialises in tours to the Namib Desert, Okavango Delta and several other areas. Now 52 years old, he lives in Bloemhof in the North West Province and is also involved in alluvial diamond mining.

RUNNING GENES
These days the Brummer name still features on SA tracks thanks to Deon’s 23-year-old twins Dean and Jean, both of whom have inherited their father’s athletic genes. Dean is currently one of the top-ranked middle distance athletes in the country and aiming for selection for the 2012 London Olympics in the 3000m Steeplechase. Deon, meanwhile, is mountain-biking to keep fit, but says he’s not done with running yet.

After retiring in 1994, he took seven years off, but in 2000 decided to lace up his running shoes again. “One night in a bar, I was told by a Comrades runner that track athletes are ‘slapgat,’ and he challenged me to try run a Comrades silver. So from 2001 to 2003 I did three Comrades and got my silver in the third one, running 6:59:51. Then I picked up a few injuries and retired again. Just recently I have felt like running again. The problem is, soon as I get going, the competitive streak kicks in again…”