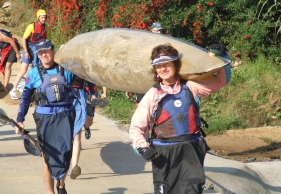 When you find yourself in the middle of a conversation between a group of paddlers and runners, you soon realise that bantering between these two disciplines is almost part and parcel of both sports. After all, runners believe paddling is a downhill sport, while running requires a far more superior fitness level than paddling. Either way, at FLCC paddlers and runners have found the best of both disciplines.

PADDLES AND RUNNING SHOES
FLCC has about 80 canoeing members and also has a running section with a further 70-odd members. It often happens that runners join FLCC just to belong to a nearby running club, but after hearing about all the big adventures on big waters, they soon join their paddling brothers and sisters.

Similarly paddlers have in many cases given in to the ease of running and the fitness level it brings, and started swapping their paddles for running shoes as a means of cross-training, says Jennie Dallas, club captain of FLCC.

HOW THE CLUB STARTED
When the late Mike Wilmot, a well-known West Rand athlete, multiple Comrades runner and Dusi canoeist, arrived in Johannesburg from Durban in the late seventies, he formed the canoeing club. In 1995, Glen Tippett founded the running section of the club, having been a member of both the canoe club and a local nearby running club, to enable runners who were also canoeists to join one club for both activities and avoid paying for two club memberships as well as buying two different sets of club clothing.

The running club therefore started with only one member, until Steve Buck joined. Today the club has close to 70 running members, and a third of them have entered for this year’s Comrades Marathon, including seven novices.

CLUB COLOURS
The Canoe Club’s Running Section has its own colours, its own club runs, breakfast runs as well as social gatherings, although there are many intertwined activities available. And of course, the club’s runners are frequently teased by other runners or bystanders at races with chirps indicating they have forgotten their paddles or their boats!

The Canoe Club colours are turquoise and navy with a touch of cerise pink to tie in the independent relationship with its sister club, Florida Running Club. Although the two clubs are totally separate entities, they support each other’s activities, time trials and socials, and assist at each other’s races when required.

TIME TRIALS
Canoe time trials start on Wednesdays at 17:45 at Florida Lake. It is not uncommon to see a number of paddlers, especially those training for the Dusi, running with their boats on their shoulders, then hopping back into the lake for a paddle leg, says Jennie.

The running section does not have its own specific time trial, because with three running clubs in the West Rand area as well as numerous other time trials available near to members’ work areas throughout Gauteng, there has been no need to establish another one.

FITNESS LEVELS
Though runners have generally superior fitness levels to most social paddlers, elite paddlers don’t have to stand a single pace back for their running brethren. Top paddlers need to be super fit and push their cardiovascular systems to the max when portaging.

Many runners at the club have found that paddling gives them a break from the everyday jarring on their bodies and provides a terrific cross-training workout, while paddlers have found running builds their cardio systems, says Jennie.

GETTING THE YOUTH INVOLVED
FLCC consists of a youth section where kids as young as under-8 can participate. On top of that, novices and kids from the community are encouraged to become involved in paddling through Jennie’s youth programme held on Sundays. She teaches them basic paddling skills and hopes to instill in them a love of water and paddling through these lessons.

ANNUAL HIGHLIGHTS
The Running Section of Florida Lake Canoe Club has not yet had its first prize-giving, as the numbers in previous years have been too small to warrant such a function, but with the increasing growth in the club (and large number of entries in this year’s Comrades), this is bound to change soon. The club’s Comrades achievers have in the past been recognised at the FLCC prize-giving with awards for the best combined times achieved for the Dusi and Comrades as well as the Fish River and Comrades .

So, whether you’re a runner or a paddler, FLCC is definitely worth a visit when you’re in the area. Who knows, you might just fall in love with a new discipline.