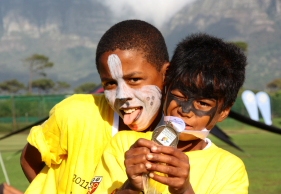 Whilst the 2010 Healthy Active Kids report card might have indicated that 42% of South African children do not get enough physical activity to reap health rewards, that our youth spend approximately three hours per day glued to screens of one kind or another, and that they have overweight statistics rivalling those of the North American youth, the kids of Cape Town were keen to tell a positive story at the MySchool Move for Health event, co-organised by the Western Province Cricket Club (WPCC) running section and the Sports Science Institute of SA.

About 1 000 of the children were bussed in, compliments of the City of Cape Town, which also sponsored their colourful T-shirts and a healthy meal. Advocate Antonio van Rheede, the portfolio chair for community services who represented the City of Cape Town at the event, was thrilled with how well the event was organised and with the positive message it instilled in the minds of these youngsters.

Having successfully completed their 6km challenge, walkers and runners were welcomed onto the field with upbeat music provided by the talented Marimba band from St Joseph’s College. Having crossed the finish line, they were quick to don their trendy medals and ask when the next event was! An enthusiastic team of girls from Springfield convent tirelessly face-pained hundreds of mini-athletes eager to make the most of the day out! Mr ADT also captivated the young audience with a fun and informative skit about safety, while they replenished their energy levels with a healthy snack.

Beaming as widely as the children was Chet Sainsbury, former race director of the Old Mutual Two Oceans ultra-marathons for 27 years and now race director of the Landmarks 21.1km and 6km races. He says he is enjoying this new portfolio and sees great potential in the new partnership that the Landsmarks race and the running section of WPCC has formed with the Sports Science Institute, and through it, the global Move for Health campaign. “The sun was shining, kids from communities all over Cape Town were here having great fun, doing something that is healthy and good for them, and there was such a feeling of happiness and goodwill everywhere. What more could a race director want?”

MySchool Marketing Manager, Helene Brand, was equally enthusiastic and added, “We are proud to see that many of the schools on the MySchool programme actively participated in this event, and we have seen that exercise and health can be lots of fun!” A special school’s prize-giving for the schools with the most participants took place shortly after the event. In the category for small schools (less than 400 learners) Ottery Youth Care campe ut tops with Deutsch Schule Tamboerskloof winning the category for larger schools (more than 400 learners)..

With no challenge being too big for this team of enthusiastic race organisers, watch this space for next year’s exciting initiatives that will once again show South Africa and the world that Capetonians lead the way in setting an amazing example of healthy living. All the Cape Town kids who participated are heroes and you have done us proud! Thanks to all the organisers and sponsors who made this effective Move for Health campaign possible.