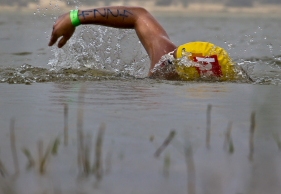 On many an afternoon and weekend in the township of Lamontville just outside Durban, you will find Mahlasela Nhlengetwa and Lloyd Miya surrounded by a bunch of kids, all eagerly hanging on to their lips and listening to advice on all things swimming, running and cycling. All present have one thing in common, their passion for sport and their eagerness and willingness to become involved in triathlons – and who knows, to even one day compete internationally and take a podium position.

Mahlasela and Lloyd are the driving force behind this youth development programme in KwaZulu-Natal and are doing so without any funding or big sponsors to back them. On top of that, they are also starting their very own triathlon club called BlacksDoTri. They might not have funding, but one soon realises both have a lot of passion for life, and triathlon in particular.

SPREADING THE LOVE
Lloyd grew up in Lamontville playing soccer, like most township boys, but was soon drawn to swimming and cycling. About 12 years ago, a friend who was a lifeguard introduced Lloyd to triathlons. “By then I was already swimming, cycling and playing soccer.” Today he is a passionate triathlete who has completed Ironman 70.3, several BSG Energade races and other sprint distances. In between, Lloyd also finds time to work as a spinning instructor at Virgin Active Gym and a seasonal swimming coach for the Ethekwini Municipality in Durban.

His friend and business partner, Mahlasela, grew up in KwaMashu outside Durban and did not share Lloyd’s childhood love for soccer. “From an early stage, I discovered that I didn’t have a flair for soccer and I was drawn to sports that were seen as unconventional in the township. I am creative by nature, and during my varsity days, the entrepreneurial bug bit. This allowed me extra time to pursue triathlons.”

He admits watching Ironman on TV scared him at first. “While watching I thought to myself, ‘That’s total madness, but I like it!’ After completing the Old Mutual Two Oceans Marathon, he was in search of a new challenge and found it in triathlons. Up to now he has completed the Joburg City Tri and a couple of sprint distance triathlons, but plans to tackle bigger races soon. “I love triathlon simply because it keeps both your body and mind fit. No other sport works your body quite like triathlon. It teaches you endurance, commitment and discipline.”

FACING CHALLENGES
Lloyd and Mahlasela both agree their biggest regret is that they did not get involved in triathlons earlier. They also both experienced challenges when they got involved and realised that if they as adults faced these challenges, how difficult it is for the youth to get involved. “I realised that without a mentor it was difficult for me to stay in the sport. I would like more black kids to be part of the sport and to not encounter the same challenges that I faced.”

There is no shortage of eagerness amongst the youth to learn more about all things triathlons, says Lloyd. Kids between six and 18 and young adults up to 26 have shown up at the training sessions. “When they arrive for training, we start by just chatting, then we warm up. Depending on what we are doing that day, we start with the swim, run or bike session. We train for about three hours,” says Lloyd.

The training is fun and invaluable, but comes with loads of challenges. Lloyd and Mahlasela have no funding and battle with a lack of resources such as bikes and transport for the kids. “Thus far we’ve managed to make it happen. This is as much a journey for the youth as it is for us,” says Mahlasela. Other challenges include parents who don’t really understand what triathlon is, kids who don’t have resources and therefore drop out of training and sometimes don’t show up consistently for training sessions. “We try to get the kids to understand that whatever they put in, they will get out.

TRIATHLETES IN THE MAKING
There is a lot of talent amongst the township kids and the earlier these kids can be developed, the better, says Lloyd. “We are hoping to over time develop elite black triathletes that will take podium positions at races and compete globally. Even if we just produce two medal-winning triathletes (one female and one male), that would be a great achievement. This is definitely quite possible. Just look at Melton Rasimphi, who got gold at the South African Long Distance Duathlon Champs, making him the first black person to win this competition. With the right resources, equipment and support, the same can be achieved in triathlon.”

BLACKS DO TRI
So, Lloyd and Mahlasela are now in the process of establishing their very own multisport club. “BlacksDoTri is a triathlon club in its infancy stages, and its goal is to introduce blacks (but not exclusively) of all ages to the sport of triathlon. Most of all, through the club I would like to support guys like Lloyd who are in the forefront of developing these kids and have an undying passion for the sport and the youth. Sometimes it’s hard to understand development when you don’t live in the same area and have not grown up in the same circumstances as these kids,” says Mahlasela.

The club’s name BlacksDoTri might raise a few eyebrows, admits Mahlasela. “The name is more tongue in cheek than anything else, but it does look good on a T-Shirt! With the name we are simply trying to say that blacks are interested and love the sport of triathlon, and that one should always keep trying in life, whatever you do. The name may seem excluding, but we are open to anyone who wants to be part of it,” says Mahlasela.

In the next year they want to encourage especially more black people to become involved in triathlons. “It’s a great sport and there are only a handful of us at races, at times as few as three in 600 athletes. I believe triathlons are not something you do, it is part of who you are and will motivate you to get up to train on those cold days.”