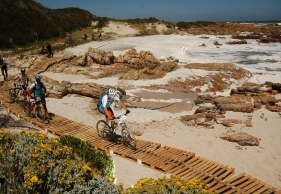 Spirits were high on 6 November when over 700 mountain bikers crossed the finish line at Onrus Caravan Park after three days of magnificent mountain biking in the slightly more social Adventure category of the Contego Wines2Whales, powered by Maserati. The overall win went to veterans Bruce Poole and Eben Espach of Team PEG, who finished in a time of 10:29:02. “The Wines2Whales route definitely tests your mountain biking ability. Getting some technical riding under the belt before the time is a must,” suggests Bruce. Team TBA came in second, with Team Craib Bros third.

In the mixed category, Ronel van Wyk and Ben Cronje of Team ASG Sport Solutions crossed the line first in 11:53:43. “It is definitely one of the best mountain biking events that the Cape has to offer. The scenery is absolutely beautiful and the routes are magnificent,” says Ronel. Team Smile placed second, while Team The Comets finished third.

Adele Ambrose and Amoryn Saayman of Team Cycle Nation rode to victory in the women’s team category, finishing in 13:16:05. According to Adele, they’re not embarrassed to admit that they chose the ‘Erdwurm’ section at Paul Cluver over the infamous Pofadder route. “We were very happy with our decision, especially after hearing all the men screaming as they road down Pofadder!” Team Goemans Farm placed second, while Team Turf2surf Ladies finished third.

RACING SNAKES
A week later saw the more serious Race category have it’s turn on the trails, with 830 racing snakes giving it all they had for the 135km of the first two days. Unfortunately, the third stage had to be cancelled due to bad weather, leaving overnight leaders Dominic Calitz and Matthys Beukes of Team MTBDestination.com to take home the men’s team title. “Stage three being cancelled was a bit of a letdown, but all in all I am very happy with our achievement,” said Dominic. “.This is definitely one of the best stage races in South Africa.” Team Blend Elite placed second, followed by Team Contego Giant.