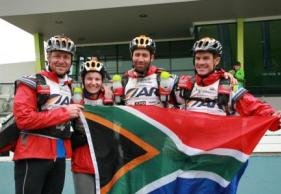 Four hundred racers, 23 nationalities, 730km of harsh terrain, and the unforgiving Tasmanian weather… these were just a few of the obstacles standing in the way of the MERRELL Adventure Addicts as they lined up recently at the AR World Champs in Burnie. They were promised ‘an experience like no other,’ and after nearly seven days of non-stop racing, the four AR campaigners can certainly attest to that.

TOP DOGS
As seasoned adventure racers, they had a pretty good idea what would await them at the annual ARWC, the undeniable gathering place for the world’s AR Top Dogs. Ahead of them lay at least six days of multi-disciplinary racing following a true expedition-style course through genuine wilderness conditions. Inthese events, four-person teams navigate a course using map, compass and landmarks via a series of control point (or CPs). Teams typically rest only when they can no longer function effectively, transitioning between a range of disciplines such as mountain biking, trekking, kayaking, swimming, technical rope work and orienteering.

Teamwork is also of the utmost importance, and this is exactly where the true strength of the MERRELL Adventure Addicts lies. They have been racing together, both locally and internationally, for four years now, and have built an innate understanding of each others’ individual strengths and weaknesses, thus shaping a formidable racing unit. Captain and navigator Graham Bird is ably supported by stalwarts Hanno Smit and Donovan Sims, with Tatum Prins bringing her special brand of girl power to the mix.

BLOOD, SWEAT AND TEARS
Though they survived the race, it does not mean they did not bleed, sweat or suffer during more than 134 hours of flat-out racing. According to Graham, the route was incredibly well thought out and varied. “It had ocean paddling, lots of varied trekking legs, including forest, beach, dune, jeep tracks, trails, grasslands, rocky and coasteering, great mountain biking with great singletrack, river paddling and flat-water paddling.”

Hanno added that “Tasmania is a remarkably beautiful place. The second half of the race tested our resolve absolutely.” And according to Donovan, the huge treks and abysmal weather tested his resolve. “I had to go into some really deep, dark places in my head to get through this, but the phenomenal experience will live on in my mind for many years to come!”

Tatum summed it all up: “From start to finish, we were constantly being chased, or chasing. It was cold, it was challenging, it was constantly unforgiving and in our faces. But we worked brilliantly as a unit. The one thing that kept me together physically and mentally is the love I have for my boys – they are incredible, unstoppable, unforgettable!”

Even though the team didn’t achieve their intended top five ranking, they walk away from ARWC2011 knowing that they gave it their best shot. They will now revel in a rest period over the festive season, and recharge their batteries for an even bigger 2012.