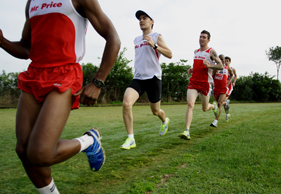 Ever since I can remember, running has been my passion and I live, eat and sleep it. The year I was born, my dad finished the Comrades in 8:31. The following year I attended my first Comrades at the tender age of one year and two days. My presence must have inspired my dad, because he said that he had the inspiration to keep on going. He finished in a time of 7:25:20 to achieve a silver medal, so I guess running was bound to shape my future!

CIRCLE OF FRIENDS
I firmly believe that over the years, running has gotten me where I am today. I have made friends with some of the best athletes in the world, from Comrades winners to 2:06 marathon runners to the back of the pack runners. I have built the best friendships, and some I even consider as family.

My passion and knowledge of running also helped me to get a job opportunity at Mr Price, where Gwen Van Lingen took me under her wing as her assistant at the Mr Price running club. I was privileged to work and build friendships with some of the best local and international runners. Today I still work at Mr Price, but have moved over to the Sport Division, where I work in marketing with an awesome team led by a great boss. I am still involved with the Mr Price club as a club manager, again working with a great team, and I believe this is one of the reasons why Mr Price is the only elite team that has carried on going since its inception way back in 1995.

In November 2007 a dream came true when a short 10-minute commentary stint on TV during the Soweto Marathon led to me being contracted to commentate for SABC on all live road running shown on TV, which I still do and love with a passion!

HOW THE RUNNING BUG BIT
I can’t recall the exact day I started running, but I do remember running in the school cross-country team and doing the odd fun run. My first proper race was when I was 12 years old and I ran the Merewent 10km. It was the longest I had ever run and I felt like I was going to die, but I finished in 52:07. The feeling of achievement was the best in the world. I was just an average Joe runner, not fast at all, and never really trained properly.

I finished my first half marathon in 2002 in 1:47, but it was in 2003 that my running changed drastically when I was invited to do a ‘speed session’ with Gwen and her group. It was my first time ever doing that kind of training, but I found it fun. As I continued training with Gwen, my times dropped drastically. My 10km best was 46:55 and my half marathon 1:39, but fast-forward seven months and I had broken 37min for 10km and run a half in 81min, taking 18min off my previous best!

RUNNING MISTAKES
One race that will always stand out was the 2004 Old Mutual Two Oceans Half Marathon, where I was running so well that I broke all my PB’s at the 5km, 8km, 10km and 15km marks along the way, but then blew up so badly with 5km to go that I was reduced to a shuffling walk. I was on target to break 80min, but really struggled and finished in 83:36. Another mistake I made shortly after that was to run Comrades in 2005, when I was too young. I followed this up with another run in 2007, where I was so injured that the day before I had to take painkillers and anti-inflammatories. I managed to finish in 8:57, but then got booked into ICU for seven days with acute renal kidney failure.

To add to all this, my Dad, who I was extremely close to, passed away in November 2008. I took it very badly. I didn’t run, I started going out to nightclubs, I was doing things I shouldn’t have been doing and I was going downhill. Mourning him was a hard time and in the process I lost that passion to get out there and train, until recently. Thanks to very special friends in my life, I have started training again and am slowly making a comeback.

A special memory I have is when some of the Mr Price runners, including the Russian Nurgalieva twins, ran with a blue ribbon on their racing kit in memory of my dad at Comrades 2009. Many athletes got to meet my dad and also became good friends with him.

WITH A LITTLE HELP FROM MY FRIENDS
One such special friend is Prodigal Khumalo, a pro-athlete with a 2:16 marathon best. He was also the 2010 City to City Marathon winner and 11th finisher at the 2010 Comrades. He is like a brother to me and has really helped me get back on track. It was in September, after talking to Prodigal about wanting to run Comrades again, that we got in my car and drove to the soccer fields nearby to go and ‘jog’ for 30 minutes. Let me tell you, I probably felt better after finishing Comrades than I did after that! Even though I was so stiff the next day, Prodigal kept on taking me to the fields to train and that’s where I discovered my passion again. At the same time, an awesome training group of guys from different backgrounds and different goals started developing.

We are six guys in the group roup consists of myself, Prodigal, Reece Allard, Adam Lipschitz, Five Mthembu and Derrick Dimba. We have just gelled together and become best of friends. With me being the slowest of the group, it does at times feel like a mission just to keep up, but it is a mission that I look forward to.

TRAINING DAYS
Our training grounds in KZN is our secret and all our training is done off-road, on grass fields, cross-country trails, through forests and a grass track that we use for speed work. Training normally consists of easy jogging on Mondays, speed sessions on Tuesday and Thursdays, a mid-week long run on a Wednesday, easy jogging on Fridays, do as you please on Saturdays and a long run on a Sunday. I have not started the speed sessions yet, as I’ve just come back into training, but watching the guys fly around the track certainly has given me the urge to start speed. But I realise Rome wasn’t built in a day!

Apart from Prodigal, who is going for gold in Comrades 2012, our group has other speedy athletes, like Adam, who is still a junior but already has a PB of 32min for 10km at the age of 17. Reece’s passion for running knows no limits and after only starting last year, he has taken his 10km from 45min to 33min and his half marathon PB is 1:14. His main goal for now is the 2012 Two Oceans Half , and I believe that by then he will be capable of breaking 70min. Derrick is the newest member of our group and is also making a comeback after a long layoff. With a 6:07 Comrades best, his main aim is to break six hours at Comrades next year. Five is a local athlete who always places top 10 in local races and has a 69min half marathon PB. He is also looking at Comrades next year, where he will make his debut.

You could say we have a Comrades squad consisting of Prodigal, Derrick, Five and myself and then the short distance speed merchants Adam and Reece, but all of our training is done together, only the duration is different.

MOTIVATION TO TRAIN
When you have the days where you don’t feel like training, it’s the awesome motivation from the group that gets those running shoes onto your feet. I know that if it wasn’t for this bunch of awesome guys, I would still be trying to find the motivation to train. They have made training fun again, the way it should be!

Our group does not have a coach, but on speed sessions there is a coach at the track, Bernie van Blerk, who assists with split times and who gives us guidance .Meanwhile, Prodigal and I have registered a company called Khumalo Walker Sports Solutions, offering personalised training and coaching. With Prodigal’s running experience and my experience managing athletes and training camps, we have a wealth of knowledge to share with others and help them achieve their dreams.

THE ORIGINAL SIX
Many athletes ask about joining our group, but we like to keep it small, although we do have some guys that join us on some long Sunday runs. That’s when our runs almost become the ‘Who’s Who’ of KZN road running, with Shepherd Chitake (fifth at the South Coast Marathon), Edwin Manyokole (2:24 marathoner) and Hlomayi Macheza just some of the elites who join in. We will soon be joined by an athlete from Pretoria who has a top five finish at the Loskop 50km and was eighth in the City to City this year. With runners like that joining, who knows what heights this group could reach, and when one of us tastes victory, it is a victory for the whole group!

I expect two Comrades gold medals coming from our stable next year. Will I be one of them? Not a chance! My aim is just to be at Comrades, fit enough and happy to be back. I think I can take at least an hour off my 2007 time and from there the sky is the limit!