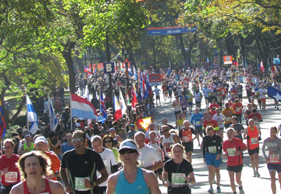 It was Stephen’s first ‘Big City Marathon’ after he managed to obtain a much sought-after elite invitation to this prestigious flagship race, and though he was hoping for a personal best of 2:12, it was not to be on the day. He went through halfway in a time of 1:10 but slowed gradually in the second half of the race to eventually finish in 2:29. However, despite the somewhat disappointing finish, Stephen learnt a lot from the experience and says he will take much from it to help him in his Comrades preparation for next year.

LESSONS LEARNT
Said Stephen: “I had never run outside of Africa, so I didn’t know what to expect, but it was great to be there and a privilege to run with the best in the world. I was hoping for a time of 2:12, but I was under-prepared and didn’t know what to expect from the course, so it was a bit of trial and error for me on the day. I also took the wrong bus from the hotel to the start, which cost me about five minutes because I didn’t start at the front of the field like I should have.”

“But despite this, I really enjoyed the atmosphere. At the Comrades, I don’t really get to feel the atmosphere because I am so focussed on what I have to do, but in New York I had no pressure and could take it all in. It was also very different from Comrades, because you can sometimes feel very lonely on the Comrades route when you’re on your own, whereas in New York there are people cheering next to the road all the time. I certainly want to go back there next year and finish in the top 10, as I know now what it is all about and will be able to train properly for it. But for now, I will be taking a rest before I place all my focus back on the Comrades in December.”

KENYAN DOMINATION
At the front of the field, Kenya’s global domination of long-distance running continued when Geoffrey Mutai shattered the long-standing course record by almost two minutes. He finished in a time of 2:05:06, while Ethiopian Firehiwot Dado made a strong comeback in the last few kilometres of the women’s race to win her first major marathon title in a time of 2:23:15. Another notable finisher from African shores was nine-time Comrades winner Bruce Fordyce, who ran a superb 2:58:51 at the age of 55.