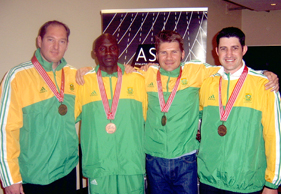 In 1999, Arnaud Malherbe was part of the SA team at the World Champs in Seville, Spain, that clocked 3:00.20 in the 4x400m relay final to set a new SA record, but they had to be content with fourth place and just missing the podium. Ten years later, the US team that won that day were disqualified after Antonio Pettigrew admitted to doping, and the SA team were promoted to third and awarded the bronze medals. For Arnaud, it was a bittersweet moment.

“I came close to winning a medal at a major international championship so many times, so I felt that was the only thing missing from my career. Naturally, I was very pleased to get that bronze, but it was no consolation for missing the podium at the World Champs. Also, in 1999 I was ranked ninth in the world in the 400m, and since then four of the guys above me have admitted to doping. If I had been in the top five, I may have been invited to more Golden League meetings, and just showing up at those meets would have seen me earn a lot more money. Still, I believe I raced as hard as I could, so I have no regrets.”

RUNNING TALENT
Arnaud was born in 1972 and grew up in Randburg, where he began running in primary school, competing in the 1200m and cross-country. By high school he was focusing on the 800m and 1500m, but then in his first year of his B.Com Accounting studies at the University of Johannesburg, he began running 400s in training to build up speed for the 800m, and soon he was specialising in the one-lap sprint instead. He was the only junior 400m runner to make the final at the SA Champs that year.

He was selected for the 1995 World University Games in Fukuoka, Japan (where he finished sixth) and the 1995 World Champs in Gothenburg, Sweden (seventh in his heat). The following year he won the first of four consecutive national titles and was selected for the 1996 Atlanta Olympics in the USA, which he describes as the highlight of his career. “I have vivid memories of walking out for the first heat in front of 80 000 people. At 300m I was ahead of world record holder Butch Reynolds, then I decided to save myself for the next round. I have mixed feelings about that second heat, because I ran a PB but finished fifth and was knocked out, despite getting the same time as the fourth guy.”

The 1997 World Champs in Athens, Greece, brought another fifth position in his heat, but then Arnaud helped the 4x400m relay team set a new SA record of 3:00.26. It was fifth again at the 1998 Commonwealth Games in Kuala Lumpur, Malaysia. Then came the 1999 World Champs, and another fifth place in the heats, but also fourth in the relay final and that national record, which stood until this year, when the SA team clocked 2:59:21 on the way to winning silver at the World Champs in South Korea.

Along the way, Arnaud met his future wife, Helen, on a plane between Rome and Budapest in 1997. “She is British and was living in Rome, and was on her way to Budapest for work, while I was on my way to join the SA team at a training camp prior to the World Champs. We sat next to each other and exchanged details, emailed sporadically for a year and met up again in 1998, when we officially started going out. She then moved to SA in December 1998, when we got engaged, and we were married a year later.”

DIFFICULT YEARS
Arnaud found himself in the Olympic squad for the 2000 Games in Sydney, Australia, but didn’t run well due to flu. Another fourth place came at the Manchester 2002 Commonwealth Games in the UK. Next up was the 2004 Olympics in Athens, where he was picked only for the relay, but this turned out to be one of his biggest disappointments, and the start of a really tough time in his life. “Helen was heavily pregnant, so I asked SASCOC if I could just fly in for the relay at the end of the Games, but they said I must go with the team, which meant hanging around for a whole month. When the race eventually came, Marcus Le Grange ran the first leg and handed over to Hendrik Mokganyetsi, but he dropped the baton in the back straight, then just jogged round and we all walked off the track. I don’t blame him at all, because he was bumped, but I was there for a month and never got to run!”

“Athens was going to be my last competition, because we were starting a family, but our daughter was born with a congenital birth defect called Edwards Syndrome and died after 10 weeks, on Christmas Eve. That was a terrible time for us, and in 2005 I decided to start training again, to regain some sanity. I told Helen I was going to give it one last try at the 2006 Commonwealth Games, but I injured my adductor muscle in my first race of 2006 and didn’t qualify. That was my last season of running, because our twins Amelie and Aiden arrived later that year, and I became a family man – I would come home from work and my wife would hand me two babies, so she could take a break. Two years later we had another boy, Nathan.”

HEAD FOR FIGURES
In the twilight years of his pro athletic career, Arnaud established a career as a financial adviser and planner, and today he is a wealth manager at RMB Private Bank. He also does athletics commentary for SABC TV as a sideline. When asked if he still runs, Arnaud just laughs and says, “I’ve got three young kids. What do you think?” But then he adds that he recently decided he wanted to get fit again and is doing some light running again. He is also a Board Member of the new Athletics South Africa, even though it is a thankless job because ASA’s reputation is so bad. “It’s a new board and a new era, and we’re not there for our own glory, and definitely not for the money! Personally, I feel I have a lot to offer athletics in South Africa, so I will continue to contribute where I can.”