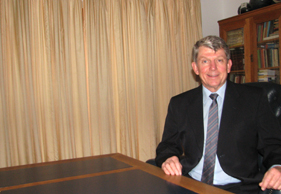 The phrase “You’re fired” is bandied about easily in reality TV programmes like The Apprentice, but in the real world, letting somebody go is not that simple, and companies or employers need to follow stringent labour law rules and regulations, which are designed to protect the rights of both employer and employee. That’s why the services of Johannesburg-based labour law specialist Dr Alec Wainwright are so high in demand.

“A typical day in my working life includes arbitrating disputed dismissals, convening disciplinary enquiries and providing companies with labour relations policies and procedures. I assist companies that need to dismiss or retrench employees, to fulfil the stringent procedural correctness and substantive fairness requirements to avoid the Labour Court later awarding those former employees up to 24 months’ salary as compensation for an unfair dismissal.”

BUSY SCHEDULE
This means that Alec must keep up to date on changes in employment legislation and mandatory legal requirements such as the Employment Equity Act, and he is an expert in his field. He is also an accredited Commissioner at the Commission for Conciliation Mediation & Arbitration (CCMA), where he conducts arbitrations and mediations, and he has been an expert witness before the Supreme Court and served on a Commission of Inquiry into industrial unrest.

As you can imagine, Alec’s Wainwright Labour Law practice is constantly busy and his schedule is usually jam-packed with meetings, which naturally affects one of his other passion in life, running. “Being busily self-employed and a somewhat lazy trainer, I seldom find time to run during the week. I have to rely mainly on Saturday and Sunday runs, which always guarantees an interesting Comrades!”

STARTING YOUNG
Born and raised in the old Transkei, Alec did cross-country at school, then began road running as well. “At age 15 I completed the 36-mile King Williams Town to East London Marathon and the following year I came 12th. This was in the mid 1960’s and in those days there were no water tables. Because I was in boarding school I ran without a second.” He ran his first Comrades when he went to university in 1968, aged just 18, crossing the line in 9:48:28 to earn the first of 17 consecutive medals, with a best time of 7:31:24 in 1971. In the process he also earned the permanent green race number 260 in 1977, one of the youngest runners ever to do so.

Then ‘life,’ including not only work but also marriage and two children, daughter Sarah and son Stuart, forced Alec to take a break from the Big C. “At age 34 I had 17 Comrades medals, so I could joke that half my life was involved in Comrades. I think I also ran 17 consecutive Bergville/Ladysmith ultras as well as a couple of Matopos 33 Milers in the then Rhodesia. However, studying part-time for Bachelors, Honours, Masters and Doctoral degrees while working full-time and raising a family, inevitably meant my Comrades running would suffer.”

COMEBACK TIME
Having last run the Comrades in 1984, Alec made a comeback in 1989 and completed another three to earn his double green number in 1991, also running his first three Old Mutual Two Oceans ultras in those years, but then he took another long break from the big ultras. That was until 2005, when he completed the Two Oceans again, and in 2007 he was lining up for the Comrades again.

Alec’s passion for running has clearly passed on to his son, with Stuart now a well known Comrades pacesetter and “long-distance freak,” as Alec proudly puts it. “I had my permanent number at 27 whereas he has six at the same age, but Stuart surpassed this when he won a 10-day circuit race, running the equivalent of 10 Comrades in 10 days on a treacherously muddy track.” Alec’s girlfriend, Thelma, will also be going for her green number in 2012.

Now 62, and with 24 Comrades medals and nine from the Two Oceans, Alec says he isn’t done yet. When asked if he still has any running goals, he immediately answers, short and sharp: “Triple Green Comrades! Now I just need to find some time to do some more training…”