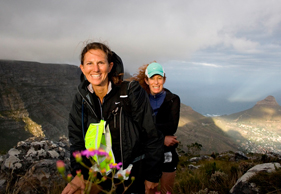 The history of the Three Peaks Challenge, presented in proud partnership with K-Way, starts more than a century ago when Carl Wilhelm Schneeberger set off on foot from the old Johannesburg Hotel in Long Street, Cape Town. He ascended Devil’s Peak and returned to the hotel for a short rest before going out again, this time hiking to Maclear’s Beacon, which at 1 086 metres above sea level is the highest point on Table Mountain. Again he returned to the hotel for a rest and then set off a third and final time for the summit of Lion’s Head before returning to the hotel. This 50-kilometre adventure, excluding rest times, took the 25-year old Schneeberger a total of nine hours and five minutes and heralded the birth of what would become the Three Peaks Challenge some 100 years later.

The route is still pretty much the same, although the winning times these days are considerably faster than Schneeberger’s original time. However, the weather can easily affect the times, and this year’s event started in fairly grumpy weather with a light drizzle, which made the paths extremely slippery and meant that runners really had to concentrate on the slippery descent of Platteklip Gorge when coming down from Table Mountain. But by the time they reached Lion’s Head, a breeze was blowing and the light cloud cover gave way to sunshine for near-perfect running weather.

PERFECT WEATHER
Andr? Calitz and one of the pre-race favourites, the Norwegian Ake Fagereng, came in together at Greenmarket Square at the end of the first peak, Devil’s Peak. By the end of the second peak, Calitz had opened up a five-minute lead over last year’s winner, Andrew Hagen, with Fagereng lying third. This order stayed the same until the finish after Lion’s Head. “The event went very well and the weather was near-perfect, accounting in part for some very good times, but Andr? surprised everybody with his mind-blowing record run,” said race organiser Gavin Snell after the race.

In the women’s race, Caroline Balkwill took line honours in 7:14:09, comfortably clear of the second-placed Petro Mostert, who finished in 7:36:45. This was Balkwill’s second win at Three Peaks and she placed 22nd overall.

Of the 117 starters, 111 runners finished. The field contained a good number of first-timers, but the majority of the entrants have run many times, including race organiser Snell, who has completed every one of the 15 editions of the race, and 64-year old Sonia Beard, who is the first woman to complete 10.