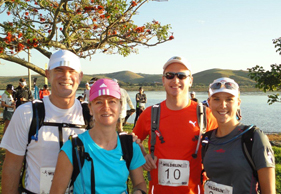 The weeks were counted down and excitement built up between the few of us that managed to get our paws on Wild Run entries, and finally the day arrived to embark on our journey. On arrival in Kei Mouth, we were welcomed by organisers Owen Middelton and Tamaryn Jupp, who handed us our race packs and goodies. Wild Run 2011 was eventually here!

Day one started with a ferry crossing to get to the start line – after Owen pointed out that if we failed to get onto the ferry on time, we would have a rather unexpected swim to the start. All aboard, we made our way towards the start. Three, two, one, and we were off on a journey of around 43km from Kei Mouth to Kob Inn. The only instruction was simple enough: Keep the sea on your right. The field spread out fairly quickly and we were left to navigate our way up the coast. We had exceptional weather and the views were simply awe-inspiring. Long stretches of untouched beaches, rolling green hills, rugged rocks and shipwrecks were all on the list of sights for the first day.

That first day also saw four river crossings, all supposedly waist-deep. Well, we found ourselves swimming nearly all of them! The last crossing was about 100m from the finish and we soon realised that this was actually going to be a bit of a rough swim. After a moment of panic, kicking fellow runners in a mad panic to get out of the water, we made it to the other side, only to be welcomed by the ever so charming photographer who had managed to capture the ‘near drowning’ on film. Thanks, Kelvin. Crossing the finish line looking like drowned rats, we noticed other runners in clothes a lot less wet, and discovered there was a row boat option to get across the treacherous river!

NAVIGATION BY PLANT
After some well deserved beers and banter, and a good night’s rest, day two was upon us, bringing 35km of even tougher terrain. Owen’s main instruction for the day was “look for the very obvious date palms.” Okay, what are date palms? The day was tackled with a fairly strong tailwind helping us on our mission from Kobb Inn to The Haven, but a big river crossing was expected about 2km before the finish. It came, we panicked, we swam, we finished. The post-run cold beers were even more deserved than the previous day, as friendships were made, stories were told, and stomach muscles became sore from all the laughing! Runners were starting to hobble, though, and the massage tables were full and the medics kept busy. More blisters, more methylate, more tears. Some of the runners not being worked on by the medics attended the Bobs for Good shoe drop at a local school, a moving experience of giving back to the community.

Getting to the start of day three was a bit of a hobble, but we were ready for our final day of our Wild Coast adventure. Having decided we were going to take day three slow – I don’t think it was possible to take it any other way – we headed off to find the famous Hole in the Wall. The day consisted of a few very big hills, and so we climbed, and climbed, and climbed. At last, there it was. What a spectacular view! A long descent and river crossing brought us to the finish. We did it, conquered 112km (some of us did 115km) of trail along one of South Africa’s most spectacular coastlines. A truly memorable adventure!