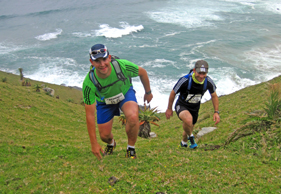 One of the real perks of my job as a running journo are the invites to exotic races in incredible settings, and they don’t come much more ‘exotic’ than the Wild Coast Wild Run, which runs 112km in three days from Kei Mouth to Hole in the Wall on the Wild Coast of the Eastern Cape, just north of East London. The rugged beauty of this coastline is simply breathtaking, with long unspoilt beaches, and in this race it is possible to go for miles and miles without seeing any other signs of life. Except for cows, that is. Plenty of those around…

For me, lining up was always going to be an unknown factor, as I had pretty much been out of action for 18 months thanks to various injury and illness niggles, including two torn calf muscles, a couple of lower back tweaks, and a bout of serious ‘man-flu’ just a few weeks before the race. So I went into it with a determined attitude to just do what I can without hurting myself. Well, I managed just under 80 kays in two days – I decided that my calves just wouldn’t handle all three days – and got to see an absolutely stunning part of the country for the first time. Even better, my legs felt fine, I had no blisters, and I felt like I could take on the world!

FIRST DAY
According to the nifty waterproof map we were given to navigate the route with, the first stage was 44.2km long, which I finished in just over 8 hours 30 minutes. Generally it went fine, but the 5km stretch of extra-loose sandy beach just after the checkpoint at 19 kays really had me thinking about turning around and thumbing a lift, but I just kept telling myself that I am going to finish the stage, no matter what! Luckily I had the company of fellow Wild Runner Susan Senekal for a good few kays, which helped keep me going, but later she pulled away and I had to do much of the last 15 kays alone. Reckon that’s the closest I have ever come to sense of humour failure!

The next morning I assessed my legs and decided that both Achilles were just too tight to risk two days in a row – both my torn calf muscles came after my Achilles tightened up, so I decided not to risk it on the 35km stage. But it was still a helluva hard decision – I was so close to changing my mind right up till the last minute – and I kept having to explain to everybody why I wasn’t lining up. Runners are a strange bunch… when one of their own drops out, they almost take it personally and need to try to get you going again.

BACK IN ACTION
So on day three I was getting high fives when I lined up again, and boy am I glad I could run, because those 34km were simply breathtaking, especially once we got on to the headlands leading up to Hole in the Wall. The long beaches were beautiful, but getting up high and looking down on the beaches, rocks, waves, dolphins, whales and more just made the race for me. I still ended up coming home with the last few runners and the sweepers, Roland and Rob, after we took a few detours around some local settlements, but the views were simply stupendous and made up for any tiredness. And it was really special coming over that last rise and seeing the finish line waiting for us at Hole in the Wall, after another eight hours on our feet. What an absolutely stunning spot for a finish line!

Overall I found the river crossings fine, after my initial fears thanks to race organiser Owen Middleton’s pre-race briefing, which really had me scared, due to having never done anything like this before. The only downside was that my phone got drowned in the last swim right at the finish, because I obviously didn’t seal the zip-lock bag properly. Wild Coast 1, Sean’s Samsung 0…

ALIVE AND KICKING
That night the legendary after-party went on till 3:30am, and I even managed a spot of dancing, including doing the Twist and a valiant attempt at the Russian Cossack kicking dance! That’s how good my legs felt, much to my surprise and relief. Now I just want to go back again and do the whole race. 112km in three days was always going to be a big ask, so I’m still more than chuffed with surviving 79 kays in two days – and with minimal leg pain, no blisters, and only a minor sense of humour failure!

A big thank you to adidas for sponsoring my trip as well as providing great kit and shoes to run in, and much thanks to Owen, Tam and the rest of the Wild Runner team for their superb organisation, hospitality and friendliness. It was a pleasure to run the Wild Coast with you.