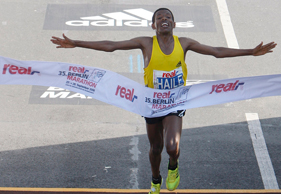 Right, you’re 38 years old, have set 27 world records or world best times during your career, have won two Olympic gold medals, four World Championship gold medals and four World Indoor Champs golds, and you were World Half Marathon Champ. You’ve pretty much won everything on the world stage from 1500m to the marathon, and you’re widely considered to be one of the all-time greatest distance runners, if not the greatest. So now that you’re approaching 40, you should be considering retirement, right? Not if you’re Haile Gebrselassie.

Geb, as he is often referred to, has no thoughts of retirement any time soon. In fact, the Ethiopian legend reckons he still has it in him to not only challenge for another Olympic medal next year in London, but also to reclaim the marathon world record which he recently lost to Kenya’s Patrick Makau. There’s plenty of running left in his legs, he says with that trademark huge smile of his.

Haile did actually retire a year ago. After dropping out of the 2010 New York City Marathon last November with a knee problem, he announced his retirement, but within days he had changed his mind, saying that he wanted to run in London. “Getting to the 2012 Olympics is my immediate goal, so I will run the Tokyo Marathon in February to try to qualify. I’m looking for a 2:05 to make our national team, because the fastest other Ethiopian this year has run a 2:07. The three fastest guys will go to London, so even a 2:06 should be enough. If I qualify, then there will be no more racing till London and I will just focus on speedwork. I believe I can do something in London, and after that I will go for the world record again in Berlin, because that is the fastest course in the world.”

MAN WITH A PLAN
Makau ran a 2:03:38 in the Berlin Marathon in September, taking 21 seconds off Haile’s 2008 mark of 2:03:59, also run in Berlin. Haile says he knew a world record was possible when the pacers got the leaders to 20km on 2:03 pace, but within the next 10km his asthma flared up and he was forced to withdraw, while Makau went on to take the win and the record. Now Haile says he wants the record back. And he knows how to do it, too: He’s going to go back to the shorter races.

“I think one of my mistakes in the past was to stop competing in the 10 000m, because the speed you develop in top level competition on the track really helps you in marathons. In 2008, when I broke the marathon world record, I was actually in training for the 10 000m at the Beijing Olympics, so I need to go back to track competition now.”

THEN WHAT, HAILE?
The big question is, what will he do after that, and with him being in Cape Town recently for product shoots and PR functions with his sponsor, adidas, it was a perfect time and place to let slip that he is seriously considering going a bit longer than the marathon in about three years’ time. In the Old Mutual Two Oceans ultra-marathon in Cape Town!

“I have been to South Africa many times since I ran here for the first time in 1991. I love it here, and I know all about your Two Oceans races. I have done more than 50km many times in training, so the distance will be fine, but I will just run Two Oceans to enjoy it, after my competitive career is finished. That’s because running is my life. I may stop competing in a few years from now, but I will never stop running.”

Running with my Heroes

For years, one of my greatest dreams was to meet, interview and run with Haile Gebrselassie. In October I finally fulfilled that dream. – BY SEAN FALCONER

In 2003 I found myself in a small town near Milan, Italy for a Nike product launch. None of us journalists could work out why Nike had flown us to this obscure little town for the get-together, until a mystery guest arrived. It was none other than newly crowned marathon world record holder Paul Tergat of Kenya, the first man ever to break 2:05, who just happened to live there.

We didn’t just get to meet Paul, we each got a one-on-one interview, but best of all, we got to go running with him, and I will always treasure those memories running through the vineyards while chatting to one of the nicest guys you will ever meet. He even laughed at our jokes about us slowing down if he was having trouble keeping up…

Having met Paul, I always hoped I would someday meet his great rival and friend, Haile Gebrselassie. Even better, I hoped to be able to run with Geb as well… and in October that dream came true when adidas phoned me up and said Geb is in the country, so would I like to interview him and then run a few kays with him? Would I? Nothing would stop me! And so a few days later I found myself on top of Signal Hill, chatting to Geb about his future racing plans, and a short while later I was once again running with one of my all-time heroes.

The only difference was that while Paul trundled along at our pace and chatted to us, Geb took off like he was going for the marathon world record. Well, that’s how it felt to us mere mortals, most of whom were just about giving everything we had to keep up with his relaxed loping strides, while he hadn’t even taken off his tracksuit! Still, it was an absolute honour to share the road with the great man, and even share a joke or two along the way. It is another memory that I will always cherish.