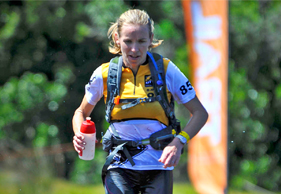 “You’ve missed the halfway cut-off time, and I’m sorry to tell you but you’ve been eliminated from the race.” Admittedly, entering the eight-hour main edition of the race was a tad ambitious for my personal trail running skills and dexterity, but these are not the words you would ever imagine hearing after four arduous months of dedicated hill and stairs training. However, the Otter African Trail Run, the Grail of Trail, is not a predictable race by any stretch of the imagination.

THE ADVENTURE STARTS
The amazing adventure begins the day prior to the big race with a Prologue of approximately 4.5km to determine your starting time and order the following day. This short sprint distance also gives contenders a fair idea of what conditions to expect over the full 42km race, an exhilarating and beautiful way to begin.

At the race briefing on the eve of the race, the address by race director Mark Collins was, to put it bluntly, spine-tingling scary! He mentioned treacherous rocks, steep hills, a million stairs, river crossings, treacherous rocks, oh yes, and really steep hills (and treacherous rocks). Wow! Expressions of anticipation, excitement and downright fear were manifest on every face under the tent, but we all knew what we had signed up for eight months earlier and the wait was finally over.

SETTING OFF
Race day began with a 45-minute drive in somewhat nervous silence to the ‘official’ start of the Otter Hike at Storms River Mouth in Tsitsikama. The fastest 16 runners on the Prologue (The Abangeni) were the first batch to start and this year, included notable trail running names such as Ryan Sandes and Bruce Arnett. Thereafter, batches of four runners left at 30-second intervals. Our turn came and after a 20-second countdown, we were off, “Run into-the-Forest, Run!”

Within 2km, we encountered the first stretch of rocks where my not-so-nimble feet slowed down to carefully contemplate the crossing. Picture a couple of panes of glass that have been taped together and then unevenly shattered across the top… Treacherous? Definitely! But oh so thrilling!

Unlike many other long distance races, the kilometres on the Otter Trail do not fly by unnoticed. In fact, for me, it was not unreasonable for 1km to take up to 14 minutes to complete. But when surrounded by such breathtaking and magnificent scenery, every second on the world-renowned trail is an absolute privilege to be appreciated.

After about two hours (and 12km) of running, I realised that the daunting eight-hour cut-off would elude me that day, and that I would finish, but unofficially. So for another 8km, I continued onward, upward and downward along the most beautiful stretch of our coastline, until just before the halfway mark, when…

THOSE WORDS!
One experiences a myriad of emotions upon hearing those words! Relief. Self-annoyance. Frustration! But by far, the strongest emotion was immense disappointment that I would need to wait another year before swimming across the Bloukrans and running toward the finish on that infamous floating bridge! It was evident on the ride back to the finish that these feelings were common to all who enjoyed the scenery viewed from the back of the return bakkie.

The highlight of the day, however, was watching friends drag themselves over “that” bridge and to the final checkpoint to complete their adventure. Their looks of utter exhaustion were soon eclipsed by the fantastic sense of triumph in what they had achieved. Well done guys, you made us super proud! So, following even more dedicated hill and stairs training, my ‘revenge’ on the 2012 floating bridge and the halfway checkpoint marshal awaits!

This year the race saw a star-studded field assembled at Storms River Mouth, including SA’s trail running star, Ryan Sandes. Fresh from his victory at the prestigious Leadville 100-mile Ultra-marathon in the USA, he would for the first time contend with a full-strength trail running field from all over the country.

At Bloukrans, Sandes had extended his lead over the chasing Bruce Arnett to six minutes, with the classy field behind these two strung out along the coastal paths. In the end, Sandes’ superb class was just too good for the rest of the field, and he steamed in across the floating bridge finish in an incredible time of 4:40, decimating the current record by more than seven minutes!

“In the last nine kilometres I was feeling it, but what a stunning route and a privilege to run here. Swimming across Bloukrans River was definitely a first for me in a trail race!” said an elated Sandes at the finish.

“In this our third year of sponsoring the Otter, the race has matured into the most iconic trail race in South Africa attracting the cr?me de la cr?me of trail runners, as well as being a ‘must-do’ on any runner’s bucket list,” said Ian Little, Marketing Manager of outdoor apparel manufacturers HI-TEC. “Our close relationship with South African National Parks ensures it is a race close to our hearts and that of our customers, who are active outdoor people.”