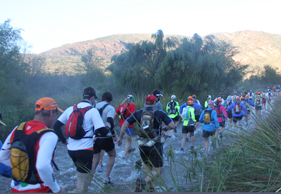 We entered on the morning entries opened, hopeful to get two of the 100 entries available for this mysterious race. It is not one of those races that your friends at the club can advise you about, because 2011 was only the third running, so very few runners really know how tough it is. The fact that we have both completed a good number of Comrades really didn’t help, because we are total novices on the trail running scene.

Luckily, we both got an entry and the pressure was on: Three months for two unfit 40-year-old runners to get ready. While my partner was training regularly, I started with too much, too soon. From a slow 8km time trial, I soon ran a 23km trail run. The next week, after a heavy training session, I suddenly felt a sharp pain in my left calf. A torn calf muscle was the verdict and over the next few weeks I went through more physio than I thought I could bear. Every time I ran, the injury showed up at 19 minutes exactly. But I was not going to give up…

HERE WE GO!
Fast forward four weeks with no running for me and we were in Port Elizabeth, on our way to the Baviaanskloof. The area is spectacularly beautiful, but the mountains looked really high. With one day to the race, the fear started to get hold of me, as I simply did not know how tough this challenge was going to be, how my fitness levels and injury would hold up, and what it would be like to run a self-sufficiency race, carrying three litres of water and seven hours’ worth of energy supplies on my back. Then the (brilliant) organisers warned us that it could either snow or be 40 degrees Celsius on the day, but fortunately we had beautiful weather.

All too soon we were off and had to do two water crossings in the first 2km. That was soon forgotten, though, as the BIG MOUNTAIN got in our way around 5km in. True to form, my calf injury showed up at 19 minutes exactly, but not as sharp as before, although I still made difficult progress up the mountain. My partner kept waiting for me, so after consulting my heart rate monitor and my legs, I pleaded with him to run at his pace and let me struggle on my own. On advice from my local adventure store, I had bought a hiking pole to help with the more serious gradients. I was really grateful for this tool!

DELIBERATE FORWARD MOTION
The scenery as we moved up the mountain was breathtaking – not that there was much breath left in me. It was unbelievable to run in an area with only nature around you, no roads and no electricity cables. However, I was getting seriously worried about finishing 40km in seven hours. The uphill was relentless, almost on-all-fours-steep at some stages. I had never given up in a race before and was beginning to wonder whether this was going to be the one to beat me, but it was at this stage that I remembered a saying from my running partner’s dad, who came along to support us: Deliberate Forward Motion. That mantra kept me going.

At last I could see the Liberty Health tent, the only assistance point on the route. I had made halfway and gratefully ate some solids, then set off again, running from orange ribbon to orange flag along the well marked route. I slowly started to think that I will be able to finish, but had no clue as to the speed I was moving at or the distance still to go. After a (long) while, the path started to become very steep again, which was when I realised I had left my hiking pole at the halfway mark…

We were told at the race briefing that there would be a river crossing 1km from the end, so when I spotted the river I thought I would finish the race in time. Unfortunately, this was not the river crossing yet. The distance and degree of difficulty continued to take their toll, and just when I again began wondering about finishing, we turned towards the river. It was really weird wading in armpit-deep water, but I knew this was just 1km from the end. With a fellow competitor I crossed the line comfortably 55th out of 99 finishers, but this result certainly doesn’t reflect the journey I went through to get there!

• The route is in a section of the Baviaanskloof Nature Reserve closed to the general public. The area is inhabited by rhino, buffalo, leopard and plenty other game… including a lot of scorpions!
• Besides receiving a shirt, cap, ‘eco-green’ hold-all bag and dated medal plus lots of goodies, each finisher receives a potted indigenous spekboom to take home, a tree that is incredibly effective at fighting carbon emissions.