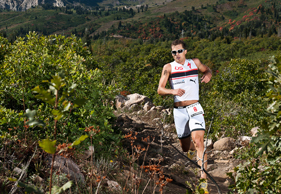 For the first time in more than 20 years, seven-time Tour de France winner Lance Armstrong competed in a triathlon when he took on the 2011 XTERRA USA Championships. The media hype was huge and the crowds big at the champs, held in Ogden, Utah, and the stage was set for a wider than usual audience to take in what developed into one of the most spectacular US XTERRA Championships yet.

Amongst it all were South Africa’s best, Conrad Stoltz, the four-time XTERRA World Champion, as well as Dan Hugo. Both did their country proud, with Stoltz finishing fourth in a time of 2:27:30 and Hugo finishing second in 2:24:50, only 24 seconds slower than the winner, Frenchman Nico Lebrun (2:24:26). Armstrong finished fifth in a time of 2:29:25.

Hugo was second out of the water, but soon passed Australia’s Ben Allen on the bike. “At the bottom of Wheeler Canyon, I moved passed Allen to lead up the mountain. I decided to ride very aggressively. Knowing both Stoltz and Armstrong would likely close the gap, it seemed a good idea to make them work for it,” says Hugo.

It was at the last eight-minute climb before T2 when the first signs of the early hard push started to show. “The crowds were wild, I could hardly hear my fatigue. In hindsight, I fear I may have over-biked a little. It was perhaps the hardest ride I’ve produced, with lungs not quite suited to altitude. That, combined with crowds I’ve never experienced at a triathlon before, had me flustered like a rookie!”

Near the top of the first 1km climb on the trail run, Stoltz was 57 seconds behind Hugo, and fatigue was setting in for the leader. He describes the feeling as that of a boxer taking blows late in the 12th round. “Despite the grovel, I felt sure I had Conrad covered… not realising that Lebrun was in the hunt. That was until I heard him 10 steps behind me. I didn’t expect it and wasn’t emotionally prepared for it.” When Lebrun passed him, Hugo says there was nothing he could do. “I was knackered!”

He says the disappointment of losing the title was intense, made even worse by the larger than usual audience. “We might never get an opportunity like this again. The world finally took notice of our sport and I wanted to step up.” However, with the XTERRA World Champs in Maui on 23 October, he says he will bounce back. “I will dissect what happened today and learn from it, and I’m looking forward to the World Champs.”