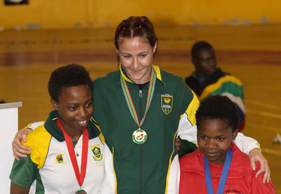 After kickboxing for 10 years and boxing for two, Jeanne-Marie discovered the sport of wrestling when she was 15 years old. She was immediately attracted to the physicality and intensity of the sport, and it wasn’t long before she achieved national colours in her third sport. “I was training at the Hugenote Amateur Boxing club in Brixton when I saw some kids doing physical exercises outside in the parking lot and thought ‘That looks fun! I want to try that.’ I got hooked on the hard physical training and got stuck to yet another male-dominated sport.”

It didn’t take long for Jeanne-Marie to become one of the country’s top female wrestlers and in her nine years on the wrestling mat she has won the South African National Champs nine times, has been included in the senior elite training squad for six years, and represented South Africa internationally seven times. During this time she says the highlights were the two bronze medals she achieved at the African Continental Championships in 2007 and 2011, and the opportunity to compete at the All Africa Games in 2007.

INTERNATIONAL COMPETITION
However, despite her success, Jeanne-Marie says there is still a long way to go before she can start competing with Olympic wrestlers. “Going to the Junior World Championships in Beijing in 2007, I realised there is a huge difference in the standard of wrestling between African countries and European countries. But I have turned this to positive energy and it has definitely caused some lifestyle and character changes within me. I will keep working hard at everything I do. The most important thing is to first get a gold medal at the African Continental Championships and work my way up to a World Championship medal, eventually qualifying to go to the Olympics. I cannot expect to win world titles if I am not the best in Africa.”

GETTING THERE
To reach her goal, Jeanne-Marie says she has to train extremely hard, as she is not as naturally talented as some other wrestlers. “I train five to six days a week and have to fit in my wrestling around my work and study schedule. I usually go for a jog and a gym session every weekday before work and wrestle after work. On Saturdays I train with the national squad and on Sundays I go on a longer run before relaxing a bit.”

“I have to run every day, there are no two ways about it. I started running when I was still doing kickboxing, to build my fitness, stamina and endurance, and to this day it has remained the best way to stay fit and strong and the fastest way to get the blood flowing and recover from tired, stiff muscles. Where long runs help me to stay moving for six minutes non-stop during my matches, short sprints improve the explosive power I need to carry out leg-attacks and lifting techniques, so I can’t wrestle without running.”

For now, her running is only a means to an end, but Jeanne-Marie says she definitely wants to add a Comrades medal to her collection of wrestling medals one day. “Any sports person, especially if you’re as competitive as me, would want one, and it is one of my wishes to one day be able to say I did Comrades.”