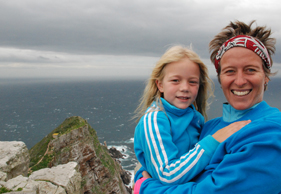 When I hear the words “family holiday,” I conjure up images of a road trip with four arguing siblings crammed into the back of an old Mercedes, biltong sandwiches and hard-boiled eggs next to the road, and two parents on the verge of giving their kids up for adoption when they finally arrive at the overnight stop. This is not the Van Kets family’s idea of a family holiday, though.

They recently returned home after covering 6 772km in 148 days on foot, bike and canoe. The expedition, called Tri the Beloved Country, began and finished in their home town of East London and went all around South Africa. Kim ran a total of 2 409km, cycled 3 748km and paddled 615km to set a new record for the fastest human-powered journey around South Africa and raise money for the Carel du Toit Centre in East London, where deaf children are taught to speak. All this with her husband, Peter and five-year-old daughter, Hannah in tow.

AN IDEA IS BORN
The Van Kets family are no strangers to adventure. Mom, Kim has been a runner for almost 20 years and the medals on her wall include Comrades and Two Oceans ultra medals, as well as numerous other road races. However, it was when she discovered trail running that she really found her niche and in the last two years she has completed the 250km Kalahari Augrabies Extreme Marathon, the Rhodes Ultra-marathon, the Amatola 100km and the Baviaanskloof Marathon, while she was the first woman home in both the Addo Elephant 100 Miler and the 270km Transkei Ultra from Port St Johns to East London.

Dad, Peter spends more time on the water and is a South African champion body boarder, certified yacht master and ocean rower. He also won the Cross-Atlantic rowing race with partner, Bill Godfrey in 2007 before becoming the first man from Africa to row across the Atlantic Ocean on his own.

Kim explains that she wanted to show her daughter with this expedition that motherhood should not prevent her from achieving her aspirations. “You know how it is, women are not very good at inconveniencing anyone in pursuit of their dreams and I wanted to demonstrate to Hannah that she CAN do so one day. Achieving one’s dreams is not the exclusive domain of dads and both Pete and I wanted to show her this with my expedition.” All that was left was to find an expedition big enough to do this and the idea for Tri the Beloved Country was born.

“My husband has rowed across the Atlantic Ocean twice. The expeditions took him 50 days and 76 days, so I had a huge credit balance and wanted to do something big, so I initially started looking at possible races. The longest one I could find was only about 700km, which seemed a bit naff and wouldn’t put a dent in my balance. I started thinking about running around South Africa, but realised it would take too long, so I decided on three disciplines to speed things up a bit.”

FROM DREAM TO REALITY
“The idea started brewing in 2008 and for a long time it wasn’t much more than a dream. I started planning and preparing physically in about June 2010, approximately nine months before I set off. The plan was to run along the coast from East London to Mozambique, covering a marathon a day, then cycle the inland border (100km a day) until I reached the southern border of Namibia, where I would kayak (50km a day) until I reached Alexander Bay. I would then run from Alexander Bay, via Cape Town, back home to East London.”

Of course, the logistics involved in the trip were immense and Kim wasn’t planning on doing this alone, something which made it a tad more difficult. “I could never have been away from my daughter for five months, so I had no option but to have the family come along. My support team consisted of my husband, a gap year student, Kirsty Borbely, and Hannah, but in actual fact, Kirsty, Peter and I were Hannah’s support team! Despite the fact that it was amazing sharing the experience with Hannah and Peter, it made it infinitely harder. There was no rest, as the moment I was done running, cycling or paddling for the day, I had to go into mom mode. My standards were also much higher because of Hannah being there, such as what we ate and where we stayed, and it all became more complicated. One constantly worries about malaria, sunburn, tick bites, home schooling and the fact that she had very little interaction with other children for weeks at a time. It was very hard to focus and be single-minded, but fortunately women are pros at juggling!”

THE EXPERIENCE
Despite all the difficulties and hardships, Kim says she would not replace this experience with anything else in the world. “It was so much more than I expected, on every level. Much tougher, much further – I estimated 5 500km, actual distance was 6 772km – and much more relentless, but more beautiful and more positive in every respect than I imagined, too. People along the way were mostly incredulous and thought we were mad, but on the whole the people we really engaged with were filled with enthusiasm. One of the huge positives was the incredible goodwill I encountered along the way. I never once felt threatened and was amazed at the care and concern I was shown by people of every race. I learned to accept the kindness and hospitality of complete strangers every day and we all experienced huge personal growth because of this.”

“I had so many unforgettable experiences along the way: Being called a ‘ramkat’ by an ancient farmer in the Kalahari, eating crocodile sosaties on the banks of the croc-infested Limpopo River, running through the night in torrential rain in Northern KwaZulu-Natal, sleeping on sand banks in the Richtersveld after a hard day on the river, seeing a leopard on the beach… and always the people we met along the way.”

CHALLENGES AND SPEED BUMPS
If you’re going to be covering the distances that Kim did, there are bound be injuries and she suffered a minor calf tear 10 days into the expedition and a stress fracture 650km from home. However, Kim says she never for one moment considered giving up, even though she had to cycle the last few hundred kilometres with one leg. She says the injuries were not the greatest challenge, though; just getting the laundry done and having to be a mom for a five-year-old after a very long day on the road proved to be a far greater challenge!

But none of these challenges were going to keep her from achieving the goals she set for herself. She completed the distance with five days to spare, demonstrated to her daughter that moms can be heroes too, had the adventure of a lifetime, and managed to raise some much-needed funds for the Carel du Toit Centre. That last goal is still ongoing, and Kim is working hard to raise further money for the centre (see details below).

WHAT’S NEXT
At the moment, Kim is enjoying her home and having clean laundry every day, but she is already contemplating her next challenge and admits that pushing oneself is very addictive! But that will have to wait for a while, as it’s Peter’s turn next. He will be racing on foot to the South Pole together with team mate, Braam Malherbe in December 2011 and January 2012. In the meantime, we can look forward to Kim’s book about the adventure, and wait with bated breath to see what she takes on next.

If you want to make a donation to the Carel du Toit Centre in East London, you can do so on Kim’s website, www.kimvankets.com, or you can make a payment directly into their account:
Carel du Toit Trust
Nedbank Vincent Park
Account Number: 120 602 8726
Branch Code: 120 621
Ref: Your name, contact details and Tri the Beloved Country.

Kim would like to thank her support team and sponsors, without whom this journey would not have been possible:
Global Business Solutions
Mpekweni Beach Resort
SPAR
New Balance
Rocky Mountain Bikes
Fluid Kayaks
Go2 Websites
Protea Hotels
Khamkirri Augrabies