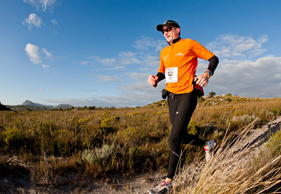 Every year towards the end of August, over a hundred athletes gather in the pre-dawn chill at Cape Point. This time of year unarguably rates as the Cape’s extreme running season, and the athletes who dare to brave the HI-TEC Puffer will be fully aware of winter’s bite as they wait for starter’s orders in the Cape Point National Park in preparation for their gruelling odyssey.

The Puffer owes its name to a rather droll acronym for the ‘Peninsula Ultra Fun Run’. It is the ‘fun’ part that non-ultra athletes will dispute, but there is no arguing with these committed runners as they stride down the Cape Point roads in the dark, heading for the reserve gate. The first 30km of the run is along tarmac, ensuring that they settle into a comfortable pace and tempo, but the ‘epic’ status kicks in as soon as the mountain trails begin.

Once beyond Scarborough and the steep Red Hill climb, a section of fynbos singletrack past Kleinplaas Dam leads the runners over Black Hill and up the Old Wagon Trail into Silvermine Nature Reserve. The Constantia Nek parking lot serves as the halfway cut-off in this amazing race, after which the runners labour up Smuts Track, along the back end of Table Mountain. With 30km to go, the runners negotiate Cape Town’s most famous landmark, running along the contour path on the eastern slope of the mountain to emerge below the lower Cable Way Station. Signal Hill is the final nail in the proverbial coffin before runners finally steam into the V&A Waterfront after running for at least seven hours.

TOP RUNNERS IMPRESS
New Cape Town resident Nic De Beer, running for Team Hi-Tec Infinity, took line honours with a new course record of 7:10:34. Leading from the start, he gradually increased the gap to the second-placed man to win by more than an hour. Nic was second last year in his Puffer debut. Veteran trail runner Karoline Hanks finished an amazing second overall, winning the women’s race in a time of 8:21:42. There were two women in the top 10 overall.

Then there was the Tuffer Puffer, for the really crazy endurance mountain goats. This back-to-back double-or-nothing madness saw them starting at 8am on the Friday before race day and running the 160km from the V&A Waterfront to Cape Point and back, through the night and without a break, until arriving at Ferryman’s Tavern. Janette Terblanche trumped all the men in this massive endurance event with a winning time of 25:03:15.