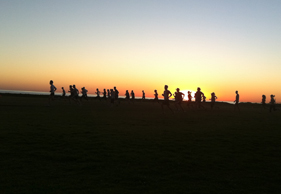 Take a drive around the V&A Waterfront area of Cape Town some days and you may be amazed to see a group of swimmers winding their way through the Waterfront canal system – despite there being large ‘no swimming’ warning signs posted up all over the place. So are these swimmers breaking the law, and will there be stern-faced officials waiting on the banks to arrest them? No, says ATC Multisport chairman Steve Attwell, because they have special permission to be there. “Our club members are officially the only people allowed to swim in the Waterfront Canals, although we must adhere to strict rules from the harbourmaster. All our swimmers must sign in when they enter the canals and sign out when they exit after a swim, they can only swim in strict club training times, and all must wear a bright orange cap. Anybody swimming outside of our training times, or not wearing an orange cap, will be arrested.”

Despite this strict regulation, Steve says that more and more athletes are joining ATC just for the great swimming training it offers. “The canals offer us an uninterrupted 1600m swim in clean, clear sea water with great visibility, and no fear of sharks! Although there was a sunfish in the canal the other day, which gave some of us a big fright when we suddenly saw this huge fin. But there is no truth to the rumours about dirty water filled with trash and litter, and no dead bodies, either!

BIGGER AND BETTER
ATC Multisport is one of the largest multisport clubs in South Africa. Established in 2006 as the Atlantic Triathlon Club, it evolved into ATC Multisport in 2009, incorporating the original Atlantic Triathlon Club covering triathlon, duathlon and Xterra, and adding ATC Running, ATC Cycling and ATC Swimming. The club is based in Mouille Point on the Atlantic Seaboard in Cape Town, using the Oceana Power Boat Club as its clubhouse.

Steve says he started the club with his friend and fellow triathlete, Guy Veysey, because he was disappointed in the low numbers of people participating in the sport when he returned from the UK in 2006. “I helped start a tri club in London and it quickly grew into a major player in the massive tri scene over there, but when I came back to South Africa I found that nobody here really knew about triathlon. For example, The Western Province Champs only had 60 participants in total, whereas I had done the UK Champs race and there were 180 athletes just in one starting wave!”

By the end of that first year the club had grown to 60 members, and passed the 100 mark the following year. Today it has well over 500 members across the various sporting sub-sections. “We have a few elite members, but our bread and butter is the 200-odd average Joe beginner triathletes. It’s a young club with a lot of young athletes, but we’ve also got quite a range of ages. We just tell people to come down and get involved, and once they meet other members, they soon get invites to training runs, rides and swims.”

“We had a fine artist do our branding, with our Neptune’s Trident fork logo being symbolic not only of the sea, but also the three disciplines that make up triathlon, and one of our members is a fashion designer, so she designed our kit. We reckon we have not only the best looking kit out there, but the best fitting as well! We also have New Balance on board as a sponsor, so we have great club clothing which is available to members at good prices, as are New Balance products, including running shoes.”

TRAINING TIMES
The club has a number of weekly training sessions, including a Tuesday evening track session, coached by former elite triathlete Grant Fillmore, which includes warm-up, plyometrics, core work, and then running. It is held on the field at La Med in Camps Bay, which makes for a stunning setting, especially at sunset. In summer, there are Tuesday and Thursday morning rides, a Friday morning canal swim, and if the weather is good, a Thursday evening sea swim at Camps Bay. Friday mornings also see a club trail run in Claremont, while the weekends are usually reserved for the longer cycling rides.

The club’s time trial is run once per month within the recently built Green Point Sport Park, and offers a safe, flat 3km loop that doesn’t cross any roads. Athletes can run one or two laps, results are posted on the club’s website, and Steve says they get an average turn-out of 60 to 70 athletes. ATC uses this same route for its Sunset Team Time Trial (SSTTT) 4x3km team relay, held twice a year in February and October. “It’s open to all clubs, with a floating trophy for the winning club, and we’d like to build this into a national inter-club competition, while we’re also looking at a corporate angle as well,” says Steve. The next one will take place on 12 October.

On the development front, the club has also established an ATC Development arm, with development coach Barry Goliath doing phenomenal work with a group of talented kids in Kraaifontein. “Barry already had a programme set up to work with these kids, so we got him into our club so that we could offer him our support,” says Steve. “We currently have six athletes signed up to the programme, really fast youngsters who can run 32 minutes for 10km, and we help with transport to events, kit for training and competition, and entry fees. New Balance is helping with clothing and shoes, and one of our members works for the Kelfords motor dealership and helps with a vehicle to get the youngsters, and sometimes their parents as well, to events. We were really proud when one of our kids recently qualified for the Western Province cross-country team for the national champs.”