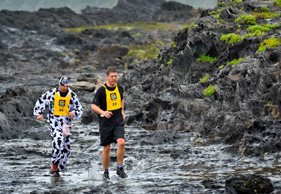 In 2008, a couple of friends got together to ride the 94.7 Cycle Challenge in memory of Jessica Madison Bain, a friend’s daughter who had passed away from cancer, and they decided to dress up in cow suits to draw more attention to their drive to raise funds for cancer research and care. However, none of them realised that their ‘small’ fundraising effort would eventually grow into raising millions of rand for the CHOC Childhood Cancer Foundation.

In their first year of fundraising, they raised R230 000, followed by a massive R2.4 million in 2009. This grew to a whopping R3.6 million last year, and since the charity was started, close to R7 million has been raised. In the process, the CHOC Cows also extended their initial cycling endeavours to various other gruelling sporting events, including the Comrades Marathon, the Absa Cape Epic and the Otter Trail run. Some of the crazier cows even climbed Kilimanjaro and cycled the Alps in Cow gear!

“Comrades was an awesome experience, four guys in Cow suits created an enormous amount of exposure for our cause and the support and enthusiasm along the route was something to behold!” says Richard Laskey, one of the founding members of the Cows. “The Otter Trail Run was a privilege to be a part of and probably the toughest event of the year, through some of the most majestic settings in our beautiful country.”

Another big event for the Cows in 2011 was the Pick n Pay Cape Argus Cycle Tour, where they were supported by the JB Express, a group of about 200 cyclists from Cape Town that were riding in memory of their friend who died from cancer. The JB Express had their own T-Shirt design, but incorporated CHOC’s Cowprint pattern. Together the Cows and the JB Express were able to raise enough money to buy a Toyota Quantum for CHOC.

“I don’t think any of us ever thought it would grow as it has done. It’s just amazing what can be accomplished by normal, everyday people. I think that there are so many people out there who would love to make a difference and get involved, but they just aren’t sure how to do it,” says Richard.

SPOTTING THE COWS
These days you can find people in Cow gear at many of the popular cycling and running events across the country. The herd has grown from an intial six Cows in 2008, to 132 in 2009 and 270 in 2010. As of the end of September 2011, there were 250 registered Cows, including almost 20 kiddies! And more cows are registering every day, a clear sign that more and more athletes are realising that while participating in the sport that they love, they can at the same time make a difference in the lives of those who need it most.

The Cows’ fundraising target for the 2011 Momentum 94.7 Cycle Challenge is R4.3 million. The money will firstly go into refurbishing the paediatric oncology wards of Charlotte Maxeke Johannesburg Academic Hospital. “In addition, we are going to buy Cow Awareness Busses that will travel the rural areas and raise awareness of the warning signs for childhood cancer. If diagnosed early, up to 80% of childhood cancer cases can be cured!” says Richard.

WANT TO BE A COW?
It’s simple, just join the herd! Or get your friends, family and kids to join the herd! Registering is VERY easy, just enter your details on www.thecows.co.za and the CHOC Cows will be in touch shortly thereafter! Otherwise you can make a donation through www.thecows.givengain.org. For further information, please contact daisy@thecows.co.za.

The main driving characters behind the Cows are Kerrin Bain, Steve Bunyard, Karyn Davey, Tanya Genis, Richard Laskey, Steven Proudfoot, Alberto Riccardi, Roberto Riccardi, Cordi van Niekerk, Grant Bain and March Bainbridge. And they say the journey as Cows over the last three years has meant a lot in their lives. “Probably the most significant thing is, that we have met and made the most awesome mates along this journey, which although it had an extremely sad beginning, has grown and inspired so many others to have faith, hope, humility and fun, and to remember to love living life! Everybody has just one chance at living life, so join the Herd to be a voice for those that can’t be heard and have fun whilst making a significant difference!”