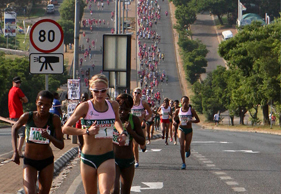 This race, the last in the SPAR Challenge, is once again set to be a fitting end to the series as Irvette van Blerk will set out to defend her title as queen of the Grand Prix against strong competition from runners such as Zintle Xiniwe, Catherine Skosana, Ren? Kalmer, Annerien van Schalkwyk, Ntombesintu Mfunzi and Maxine Heine-Wacker. There should be great racing up front, but the real race will be a bit further back, where thousands of women will get to celebrate their health and femininity in what has become known as South Africa’s most beautiful challenge.

The race will once again take place at the Old Parktonians Sports Club and be hosted by the Rand Athletic Club. The first 10 000 pre-entries will each receive a race T-shirt and the first 11 000 will receive a medal and a goodie bag. Other spot prizes on the day will include groceries from SPAR for a year, valued at R12 000, and R2 000 worth of SPAR’s new Good Living stainless steel range of appliances.

CELEBRATE SPRING
October is one of the prettiest months in Joburg and it is not only a pleasure to run the race, but also the perfect opportunity to build a fitness base for the rest of the season. However, for those who think 10km is too big a challenge, they can opt for the 5km fun run, which is just as popular. As always, walkers are welcome at both events and there will most definitely be a few strollers and tiny tots taking part in the fun.

The SPAR Challenge is all about women and the final leg is Joburg’s chance to celebrate women with a sparkling spring time run. It also coincides with Breast Cancer Month and a portion of the proceeds from the race go to Reach for Recovery, a support group for women who have been diagnosed with breast cancer. A new addition to race day is a celebrity relay which will be run by five beautiful South African women, including former Miss SA, Nicole Flint, and 5fm DJ Poppy Ntshongwana. They will carry a torch of hope from start to finish to symbolise the journey of women with breast cancer, and the hope of a full recovery.

So dust off your running shoes, pack the family in the car and head to Old Parks on 9 October. There will be a variety of food stalls, a children’s play area with jumping castles and face painting, as well as live entertainment provided by Denim, one of South Africa’s top party bands. Entry forms are available from all SPAR, SUPERSPAR and KWIKSPAR stores or online at www.spar.co.za.

This month we tried: Aerial Yoga

This new fitness phenomenon has quickly spread across the globe and people in New York, Los Angeles, Chicago, London and several other major cities have flocked to classes to give it a try. Since April of this year, it has been in Johannesburg as well, and we thought we’d give it a try.

Not being much of a yoga expert, I didn’t quite know what to expect, but I soon learned a whole lot more about downward and upward dogs, pigeons and dolphins, even though most of them were upside down. Aerial yoga is not for you if you’re looking for some quiet meditation time. It combines components from yoga with a bit of aerobics, Pilates and strength training, so you will not only get the calming effects of yoga, but also a pretty descent cardio and core workout.

Above all it is challenging and fun, and the support of the hammock will help you to attempt poses you wouldn’t have done without it. Because you are inverted for some of the poses, your spine and other joints have the opportunity to lengthen and decompress. This decompression will make you feel a little taller after class, but beware if you are not used to hanging upside down… these poses might be a little overwhelming at first.

The only aerial yoga class we could locate in South Africa is presented by Carly Bowden and Julie Swart in Northriding, Johannesburg. However, Carly promised more branches were coming as soon as they have trained more instructors, and hopefully the rest of the country will have the opportunity to try aerial yoga soon. For more information, visit www.aerialyoga.co.za.