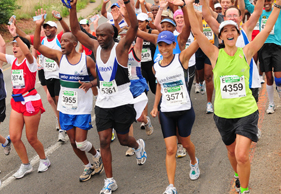 There is no better time to start training than spring time in South Africa, and if you are wondering what your first race of 2012 should be, this is it! The Dis-Chem Half Marathon is one of South Africa’s biggest half marathons for good reason, and every year more and more runners choose this race as their first one of the year. All the more reason for you to start preparing, especially if you’re a novice. This is the ideal opportunity to put on your running shoes and get out there. Now is the time to commit.

Modern Athlete will be the official media partner of next year’s race, having teamed up with the Dis-Chem Half Marathon and it’s organisers, Bedfordview Country Club (BCC) to bring you a simple and easy-to-follow training programme geared towards novices who want to run their first half marathon in January next year. The programme is compiled by Ray Orchison, captain of the Bedfordview Performance Squad, and promises to help you build your fitness from novice to half marathon finisher. Make sure you get all editions up until January to get the whole training programme and ensure you have only good memories of your first 21.

So what are you waiting for? Get up off that couch! Download the training programme for October here.

THE COACH
Ray Orchison has run five Comrades Marathons with a PB of 7:18 earlier this year. He was club captain at BCC from 2009 to 2011 before he moved on to become captain the Bedfordview Performance Squad.