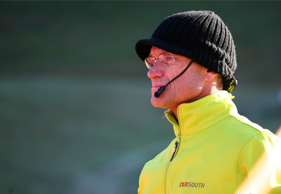 Most South African race commentators in running, cycling and multisport only pick up the mic as a sideline on top of a ‘real job,’ but Altus Schreuder has managed to turn it into a professional career while still leaving himself time to do all the things he likes to do, including watching every sport on television, coaching athletics, playing touch rugby, going for training runs when most people are stuck at work, and spending real quality time with his son.

You see, in 2007, with a highly successful career as a scientist, Altus decided that he didn’t like the road he was on. “I sat down with my wife, An-Ria, and said I didn’t want to be a scientist and businessman any more, because it really isn’t me. She was trying to get her law career started while also looking after our son, Hugo, so I suggested we swap roles and she becomes a career woman while I become a house-husband and concentrate on commentary work.”

IT’S A DEAL
An-Ria agreed and four years down the line she has finished her Masters degree, qualified as an advocate, and is now Head of the Legal Department for Mass Retail at Old Mutual. She drives from Stellenbosch to Cape Town and back each day, but at least she gets to sleep in a bit, thanks to Altus. “I do the morning drill. I wake up Hugo, make the breakfast and get him to school. I take care of nearly everything in the house and garden, and in the afternoon I help with homework and do the cooking during the week.”

Altus then ‘puts in his hours’ on the weekend doing commentary – he is booked for 90% of weekends in the year and sometimes has up to four different events in one weekend, including run, bike, multisport and track events. Ironically, he got into commentary by accident in 1991, when coaching his athletes at a local track meet. The announcer had not arrived, so he was asked to take over, and did such a good job that he was asked again. By 1994 he was the stadium announcer for the national Engen Series, and also worked in TV commentary for the SABC. Since 2000 he has been the national field announcer for all ASA track meets.

STUDY, RUN, WORK
While studying at the University of Stellenbosch, Altus played rugby and also participated in modern dancing, but then decided to give athletics a try. “In my fourth year in 1984, I started with the 400m and ran a PB of 49.9 seconds, then moved up to the 800m and in 1986 I ran my PB of 1:52.9.” Having completed his M.Sc in Biochemistry, Altus moved to Pretoria in 1989 to work as a forensic scientist for the South African Police. He took up jogging to keep fit, and then a friend suggested he try a half marathon. Despite thinking he wouldn’t make the distance, he ran 1:15:34, which is still his PB.

After two years in Pretoria, he decided he wanted to come home again. “I resigned without a job to go to, just to come back to the Cape, but fortunately soon found a job as an analytical chemist at the Department of Agriculture in Stellenbosch, which regulates the wine industry. By 1996 I was Head of the National Wine and Spirits Laboratory, worked for a private lab from 1999 to 2003, then started my own wine lab. But in 2007 I wanted a change again, and that’s when An-Ria and I decided to change things around – and I could finally fit running in again.”

RUNNING GOALS
Being the analytically-minded person that he is, Altus has a detailed programme up to the year 2016, listing all the events he plans to do. His target for 2011 is a sub-3:00 marathon in November (his PB is 2:56:20), then a silver medal at the 2012 Comrades Marathon and Ironman in 2014, as well many trail races around the world, including the Marathon de Sables in the Sahara. Then in 2016 he wants to be back on the track for the World Masters Athletic Champs.

Of course, An-Ria and Hugo will go along whenever possible, because Altus says they have another deal: “Anria and I share a love for travelling, but I love sport while she loves shopping, so the deal is that she and Hugo will stay in ‘civilisation’ while I run. As with everything else, it works brilliantly for us both!”