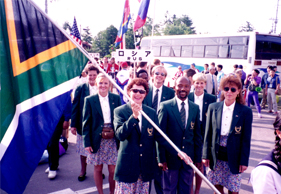 The 1992 Comrades Marathon will unfortunately always be remembered for race winner Charl Mattheus being disqualified after testing positive for the use of a banned substance, a charge he has always denied. That saw second-placed Jetman Msutu promoted to first, thus becoming only the second black runner to win the race after Sam Tshabalala’s win in 1989. However, the 1992 race stands out for another reason: It was the last time that the men’s and women’s winners in South Africa’s premier race were both South African, with Frances van Blerk taking the women’s title in 6:51:05.

In her sixth Comrades, her win capped a steady climb up the placings from her first run in 1987, when she finished 171st in the women’s race, crossing the line in 10:04:39. The following year she was 14th in 7:53:21, then 17th and 13th in the next two runs with times of 7:46:13 and 7:37:27, and in 1991 she broke into the top five with a time of 7:04:49. Later that year she won the SA 100km Champs title, so it shouldn’t have come as a surprise when she won the Comrades in 1992, but at the post-race media conference one of the journalists actually asked if she had run the race before! That was because she had been running under her married name in previous years, Wentzel, but recently divorced, the name Van Blerk was new to the media. There was no forgetting it after her big win, though.

PERFECT RACE
Frances described winning the Comrades as the greatest moment in her life. “I can’t describe how absolutely wonderful it was, especially with my whole family there to see me win – my father, brother, my niece Irvette. I had told them to come watch because I was confident I would finish on the podium, so I wanted them there for prize-giving, but I didn’t expect to win. It was just one of those perfect races. I had expected to run with 1991 runner-up Tilda Tearle most of the race and planned to break away from her at the bottom of Polly’s, but one kilometre from halfway I was in the lead already. At first I felt a bit rattled to be in front, but going through halfway, I realised I was still running at my planned pace, so I settled down.”

“The second half was really tough because I had no seconds to give me info about the chasing women. I asked the guys on motorbikes, but they couldn’t tell me much, so I just put my head down and ran. As we entered Pietermaritzburg, a guy on a bike told me Tilda was three behind me. I thought that meant three minutes, when he actually meant three kilometres. I just kept running as hard as I could and was very surprised to find out later how big the gap was.”

NATURAL TALENT
Frances was born in Kamanjab in 1955, in what was then the old South West Africa. After school, she moved to South Africa to study teaching in Pretoria, where she still lives and works today. Having grown up on a farm, she says she loves the outdoors and always did sport at school, but did no sport for eight years after she started working. Then in 1987, aged 31 – and the same year her niece, goddaughter and future running star Irvette was born – she took up running. “I had lost touch with my College roommate, Sarien, after she moved to Carletonville and I went to Alberton. She called me up one day to catch up, and told me she was planning to run the Comrades. I told her I also wanted to run it after watching it on TV, so we agreed to run together. Unfortunately, I ate something that upset my stomach the day before the race and had to leave the road a few times.”

“The next year we lined up near the back of the field again, where we thought we belonged, but after 15km I told Sarien I felt like a horse being reined in, so she told me to go. Everybody was surprised by my time, and said I should get a coach and try to go even faster. In 1990 I moved to Pretoria and began training with Koos Sutherland, and I don’t think I would have achieved what I did without him.”

LIFE-CHANGING RUN
Frances says that winning the Comrades opened many doors for her, including the opportunity to compete overseas. “I won just as the international sports ban was lifted, so just over a month after Comrades, I was invited to run my first international race at the 67km Swiss Alpine Marathon. It was also my first mountain race, and my legs were still sore from the Comrades, so I took strain in the last kilometres, but I finished 11th woman. I had just got back from Switzerland when I was invited to run the 52km Fish River Marathon in Namibia, which I won.”

At the end of that year, Frances walked off with the SA Ultra Runner of Year and Northern Transvaal Sportswoman of the Year awards, and more honours were soon to follow – in 1993 she was selected for the South African team for the World 100km Championships in Belgium. “It was a dream come true to be awarded national colours and to represent my country, but I went to Belgium overtrained and my legs were sore before we even started. But I had to finish, because I was running in my country’s colours, and I came home 17th in 8:26.”

A year later Frances was awarded national colours for cross-country, then once again found herself running for her country in the World 100km Champs, this time in Japan, and came home with another top 20 finish. Unfortunately, being selected for the World Champs squads meant she wasn’t allowed to run the Comrades, and thus never got to defend her title. “It was a very hard decision not to run the Comrades, but I didn’t want to miss the opportunity to run in Springbok colours. I still went to the 1993 Comrades as a VIP guest, and I had a little cry at the start because I was so sad not to be running. In 1994 I was there again to watch and then in 1995 I was invited to run the Jackson 50-miler in Texas, so I missed the Comrades again, but I won in the USA, so that made up for it.”

BACK FOR MORE
Frances finally lined up for the Comrades again in 1996, but says she didn’t feel any pressure. “I knew I was a veteran now, and even though it felt strange not running at the front any more, I was happy to finish 16th and first veteran in 7:21, and earn another silver medal.” She missed the 1997 race with an Achilles injury, then lined up again in 1998 with a new outlook: “I decided that my competitive days were over and just wanted to go for my Green Number.” That saw Frances run her 10th Comrades in 2000, and she proudly earned her Double Green earlier this year, having run every year since 1998 except for 2006.

In fact, 2011 has been quite a momentous year for her, because she also ran her 20th Loskop Marathon 50km, and went to the USA for the World Masters Athletics Championships in July, where she competed in the women’s 55-59 age category in the 1500m (8th), 5000m (6th), 8km cross-country (5th) and the Marathon (6th)! Back home, she won her age category in the Gauteng North Cross-country Champs, then went on to retain her national title at the SA Champs in Bloemfontein. (She also won the SA Half Marathon Champs title in the 50-59 age category in 2005.)

TRACK MOTIVATION
These days, Frances says it’s the track that really motivates her. “In 2007 I joined the Masters Athletics Association, even though I had never done track before. At first I didn’t feel comfortable on the track, but I got used to it, and I like that the races are short and hard, so you recover quickly. In 2008 I went to the World Masters Champs for the first time, in Italy, as well as the Indoor Champs in France, where I won silver in the cross-country race, then Finland in 2009 and the USA in 2011.”

“I need goals to keep me motivated to run, so next year I will run my 21st Comrades, but I’m not going to go for 30, because I’m looking to get faster over shorter distances and go to the World Masters Champs in Brazil in 2014. It’s amazing to see people in their 80s and 90s still competing, still so positive and looking young and healthy. I want to run like them; I never want to stop running.”