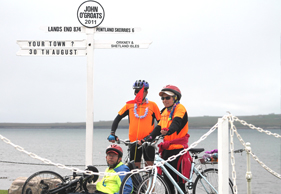 I have always loved sport and was active in school rugby and cricket. I also loved golf, tennis and squash, and did a lot of weight training, cycling, swimming, and running. I enjoyed feeling fit and strong, and would take on any physical challenge, even if it was reckless. Then tragedy struck…

During my second year of dental studies at the University of Witwatersrand, just a month before my twentieth birthday, I fell through a gym hall roof during a midnight student prank. My life, which seemed so carefree and good, came crashing down. I lay on the cold floor, paralysed from the chest down, my spinal cord severed. I wondered what would become of me. I lost 15kg in less than a week, as my once fit and muscular lower body became literally skin and bones.

NEW BEGINNINGS
Three gruelling and painful months of rehabilitation followed, but during that time I met with Christ in a new and exciting way. Instead of feeling hopeless and depressed, I had a new sense of purpose and inner strength which can only come from him. My parents and two brothers were a tremendous support to me. I found a joy, a peace and a hope, which are still with me 29 years later. Although physically life became harder and more challenging, yet inwardly I grew as a person, emotionally and spiritually.

Miraculously, four years later I graduated as the first paraplegic dentist, ironically to a standing ovation. Student life was very busy and the only sport I did was swimming, as well as regular exercise by walking with crutches and callipers… I really missed playing golf and tennis, and thought I would never be able to play them again.

LIFE IN MALAWI
After graduating, I got married to Julia and we went to train as missionaries. We enjoyed swimming and kayaking, touring several rivers. We went to Malawi for 10 years where, with our team, we translated the Sena Bible. It was a challenge living in a third world country in a wheelchair, but it was where I was encouraged to try playing golf again, which I have now been playing from my wheelchair for nearly 20 years. I won the SA Disabled Open Golf Championship in 2003 and 2009, and also won the 2010 Masters Handigolf Competition in the UK.

I became chronically ill in Malawi due to recurring Malaria, resulting in severe kidney damage. I was advised to return to South Africa to have one of my kidneys and my bladder removed in 2001. Through much prayer, second opinions, and a decision I made to do regular swimming and wheelchair exercise, the surgery was not done and over a period of a year, my kidney function returned to normal. I swam the Midmar Mile open water swim in 2003, completing it in 48 minutes.

LIFE IN TANZANIA
With renewed health we moved to Morogoro, Tanzania, which is a high-risk malaria and typhoid area. I got malaria another five times, but I am passionate about Bible translation, and am willing to take on the risk of ill health for the sake of bringing God’s word to marginalised groups. I have an eternal perspective on my life, and believe that eternity is worth any sacrifice! In the five years we lived in Tanzania I swam regularly and played golf a least once a week, which I believe boosted my health. We started 10 full-scale Bible translation projects in the five-year period, and handed the work over to nationals before returning to South Africa in 2009. My wife, daughter, son, and I all swam the Midmar Mile again in 2009. A few months later, I took up the post of the CEO of The Word for the World Bible Translators Charity in UK.

TAKING UP HAND CYCLING
My brother, Ivor, and his son, who was a professional cyclist for a year, suggested I take up hand cycling as a sport in the UK. Hand cycling on the dirt roads of Malawi and Tanzania was never an option! During one of my trips to Durban, Ivor arranged a trial ride on a friend’s hand bike on the Durban beachfront. All went well until we returned to our car after the ride to find no car… and no wheelchair… they had been stolen and were never recovered. Not the perfect end to my maiden voyage on a hand cycle!

So, after being in England for one year (and battling to get into indoor swimming as a sport), I met a friend who somewhat jokingly suggested that I do a fundraiser of 1000 miles on a hand cycle. The idea started to take shape as a potentially good fundraising tool for my work as CEO, so I soon found a reasonably priced second-hand hand cycle, and on 5 January 2011 started my first training ride ever. There was still snow on the ground, but how I enjoyed riding! Within minutes of starting a ride, I would soon warm up and could go for miles, even in freezing conditions. I no longer felt like a shut-in, and I could start enjoying the outdoors again – even in winter! My wife and I started with two-hour rides, covering about 15 miles four times a week. After two months this grew to three-hour rides of about 25 miles. We managed a few 40-mile rides in five hours after six months of training, so I began to feel I could manage the daunting 1000-mile challenge of Land’s End to John O’Groats.

WHEELS FOR THE WORD
Months went into planning the trip: Starting and stopover points for each day (taking distance and gradient into account), accommodation, support vehicles, speaking venues to promote our work, interviews with the press, including radio and TV stations, and looking for sponsors to back the ride, which we called Wheels for the Word. I only had two training rides with other hand cyclists. One experienced hand cyclist took me for a ride in Bedfordshire, which is flat countryside, and he gave me a few tips on technique. I also did a 30-mile hand cycle with eight other hand cyclists from Kidlington to Stoke Mandeville, the home of the Paralympics. I tried my best to keep up with the race leader, but eventually fell behind – only to discover later he had a power-assisted hand cycle. Little wonder that I achieved my best ever average speed of 11 miles per hour on that ride!

We knew that Cornwall and Scotland were infamously hilly, so were glad to spend two weeks training in hilly Somerset before the epic ride. One big dampener for me was that just two nights before our start on 8 August, I discovered a pressure sore on my behind, due to the heavy hill training – the first I had ever had in 29 years! I got some dressings for it and kept a close eye on the sore, and thankfully it did not get worse on the ride.

STARTING OUR JOURNEY
On 8 August, with fair weather, we made our start from Land’s End. I was very excited that my 15-year-old son, Timothy, was joining Julia and I on the ride. He had only done three training rides with us, so we hoped he could make the distance. A friend from London also joined us for the first two weeks. My daughter, who undertook to do a daily blog, and my younger son were to ride in the support vehicle. What a pleasure to do a trip like this with my family!

The first day of 40 miles from Land’s End to Truro went well, but the second day to Camelford was agony. My left shoulder felt like a knife was lodged in it! I had notions of giving up, but after lunch and some anti-inflammatories, I reached Camelford. The first three days presented the most challenging hills (climbing 6600 feet in total). The next several days were long, but went smoothly. The Shap Fell hill in the Lake District on Day 12 was a huge 1200 foot climb, but what an exhilarating downhill on the other side! My brother and his wife flew out from Durban to ride the last week with us. The Scottish Highlands lived up to their name. The hills seemed to go on forever, but the spectacular scenery made up for the hills and rain!

We were elated to cross the finishing line together. I completed the 1000 miles from end to end of Britain by hand in 23 days! We averaged 50 miles per day, six days a week, resting every seventh day, and speaking in various churches about the reason for my trip, to mobilise greater support for the remaining 2200 marginalised people groups in the world, who as yet don’t have any literature in their language, let alone even one verse of the Bible! We also spoke at midweek meetings almost every night, emphasising the fact that these marginalised groups are disabled through poverty, illiteracy and lack of education. The funds we raised will help The Word for the World to work among these marginalised groups, doing language development, literacy and Bible translation.

I climbed a total of 34 500 feet, which is 5000 feet higher than Everest! I have climbed my mountain, and I have had to dig deeper than before, and have found God is always there. I am sure I will embark on another adventure – in fact, with God every day is an exciting adventure. To my disabled friends, I say get out there, you can do more than you think is possible. Life is for the taking! Each of us has our own particular mountain or challenge to overcome, but through determination and passion, we can not only achieve our own dreams, but also be involved in helping others, perhaps less privileged than ourselves, to achieve their dreams!

If you would like more information about The Word for the World’s Bible translation and literacy work, please log onto www.twftw.org.