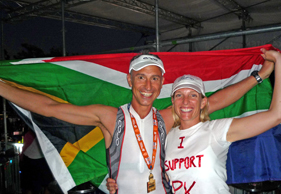 Paul Kaye is a man who has seen it all: Elation as weary athletes reach the finish line to become Ironmen and women, sorrow as the last athletes wearily try to drag their bodies across the finish line before missing the cut-off time, and those unique moments, such as the marriage proposals and the ecstasy of pro’s setting new world records on home soil!

Not a bad job at all, you would think. But though it all sounds pretty glamorous and fun, it takes hard work and a special type of person to announce at gruelling distance events that takes many hours, such as Ironman, Two Oceans and Comrades, all races where Paul has left his mark on many an athlete.

THE ‘FACE’ OF IRONMAN
There are probably few athletes in South Africa who have done the Ironman and who don’t know Paul Kaye. Because as any Ironman will tell you, when you reach that red carpet, Paul doesn’t just make you feel like a hero, he makes you feel that the whole finish line was set up just for you, and that he personally has waited for you all those hours. And while he welcomes you home, he makes sure the spectators get involved. Ask any Ironman, it is one of the greatest feelings you will ever experience!

Paul has been involved with Ironman 70.3 and Ironman South Africa since 2006, and in the last two years has increasingly become in demand at international triathlons worldwide. So how does he do it? “I see myself as a thief who gets to steal energy and a little bit of everyone’s emotions. That’s what keeps me going.”

But Paul’s job involves more than just announcing; at most events he also runs the complete entertainment schedule, which means he hires the other announcers and DJs, chooses the music and creates the schedule of events. “The hardest thing about announcing is how do you say the same thing all day long, but in different words? I tend to watch body language and I watch the spectators. Of course, I also understand there is a holy trinity: Firstly you must make sure the event sponsors are happy, then you have to make sure the athlete feels like a hero and thirdly you need to make sure that the spectators enjoy themselves and are engaged, making them feel what the athletes are feeling. You run it almost like a radio show. The more you plan, the more structure you create and the more you free your brain for the magic.”

Ironman events have a special place in Paul’s heart. “Comrades also has amazing emotion at the finish line, but to me the finish line of any Ironman is more personal. You have people coming through one or two at a time. It’s a narrow finish line and you can see the look in their eyes. Any athlete finishing needs that moment of recognition and often athletes stop and say to me: ‘Say it!’ Until I call out: You are an Ironman!”

BACKGROUND
Paul started in radio at the tender age of 18 as DJ for his campus radio station. At the age of 20, he got a job at the former Radio Good Hope and that is when the radio bug bit; he quit varsity and on 28 April 1990 started working full time at Good Hope, making him the youngest DJ on FM Stereo in the country at the time. Soon he was doing commentating as well. “I met a guy who thought I had a good attitude and asked me to announce at boat races. At the first race that I announced, former Springbok rugby player Rob Louw got hit by a boat and nearly died! What a start!”

From there Paul’s announcing career took off, and he also did some TV presenting for the former Junior Top Sport on SABC, announcing at waterki events, the Cape Town Marathon and the former 5FM Energade Triathlon Series. “That was 1994 and my first exposure to triathlons, which eventually led to me participating in tri’s!”

BECOMING AN IRONMAN
In 2000 Paul was invited to Mauritius for a triathlon. “All the pro’s were there and they were all saying I was a big mouth, but have never done a triathlon myself! That’s when I realised my waistline was expanding and I can’t live forever. My son was about to be born and I realised I needed to get fit if I wanted to be an active, participating father.”

He did his first triathlon in a Speedo and Energade event T-shirt! “I had to swim breaststroke most of the way before getting out the water second-last. I got on my mountain bike with its bent frame and again got off second-last. Eventually the only person that finished behind me was a woman.”

In between announcing, Paul started participating in more tri’s. To cope with the stress of divorce in 2005, Paul decided to train even harder. “In 2006 my wife advised me she will be leaving the country with our two kids. Announcing at Ironman in 2007 was extremely hard and emotional for me, as I saw athletes crossing the finish line with their kids. I set myself a goal to also finish Ironman with my kids.”

Paul got an invitation to race the 10th anniversary of Ironman Austria and reaching the finish line, his dream came true. His kids were waiting for him. “My daughter was 15 at the time and I thought she would be way to cool to finish with me. But there she was in an Ironman T-shirt next to my son, who even gelled his hair for the occasion. My pain was gone and I crossed the finish line holding my two kids’ hands.”

In 2009 Paul met the love of his life, Kelly, at a Ken and Barbie Valentine’s Party for singles. “Every Ken had to bring a Barbie and every Barbie had to bring a Ken they were unattached to.” Paul and Kelly, who met the day before, decided to go together. After ending up in the party’s kissing booth, they were inseparable. Kelly, who worked as a stewardess on a luxury yacht, decided to work one more contract on the boat before settling, which meant Paul needed another distraction! He started training for Ironman Austria and in 2009 became a double Ironman, with Kelly cheering him on.

THE UPS AND DOWNS
As in any job, there are ups and downs, like the time when Paul had to announce at Ironman Nice after finding out that morning that his mom had passed away. “I had to fake it. It’s the hardest thing I have ever done.”

When announcing Paul allows the energy of the event to inspire him. “I try to look into people’s eyes, see their emotions and watch their body language. That has often inspired me to do things and say things. I don’t go to the finish line with a script, it just happens.”

Are the emotions of elites and Average Joe’s any different? “For the elites, they make a living out of it. The age groupers are ordinary people achieving something extraordinary. When I entered Ironman, I did so to test my limits, I wanted to know if I could sink to depths that I thought were impossible and then come out the other side? Ironman taught me all of that. Everybody that does Ironman learns something about themselves. Ordinary people all have a story.”

FOCUS ON THE FINISH LINE
Paul and his wife recently started a company recently called Focus.on.the.Finish.Line, providing a total solution for runners travelling to different races. This includes bike transport, hotel accommodation, restaurant reservations, tours etc. “I came across this idea after spending so much money on equipment that had to be replaced because my bike was damaged in transportation. One day I said to Kelly, if only we could provide a solution to athletes which allows them to only focus on the finish line. And that is where the name for our business came from. Kelly comes from a hospitality background, so she knows how to deliver a level of service that is beyond excellent.”

Paul’s two big dreams now include putting together a race package for South Africans to travel to and participate in Ironman Austria. “It is one of the best Ironman events on the planet and I would love to share that with others.” His second dream is to become to triathlon what Phil Liggett has become to cycling. “I would love to one day announce at the finish line of the Ironman World Champs in Kona. I want to be one of those great South African exports.”