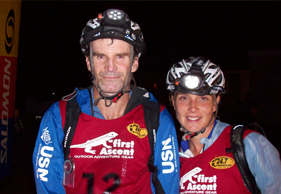 Early in June this year, Athletics South Africa (ASA) announced the first ever South African team to participate in the IAU (International Association of Ultra Runners) Trail World Championships, taking place in Ireland on 9 July. Given the relatively unstructured nature of trail running in this country, selecting a team of three men and three women to take on the tough 71km course proved quite a difficult task. Thus the selectors went for a blend of “athletes who regularly feature in the top five positions on the local trail running circuit, but also athletes who are known as ‘hard’ athletes in their fields.”

Included in the women’s line-up was Jeannie Bomford, whose recent win in the 2011 Pronutro AfricanX three-day trail race (with partner Sarah Grey) and winning last year’s Otter Trail Marathon, in a course record time, on her way to winning the gruelling nine-race Southern Storm title, secured her selection. Other notable trail running highlights in her career include winning the Pick n Pay Knysna Forest Marathon in 2005, the 35km Crazy Store Table Mountain Challenge in 2007, and the 36km Hansa Hout Bay Trail Challenge in 2008.

NOT 100% FIT
Jeannie herself admits that she wasn’t really ready for the World Champs. “I was surprised to be selected, and we only found out a month before the race that we were going, so our preparation time was way too short for a 70km event. Unfortunately, I also had a sick little boy at home and was not feeling so hot myself on race day, and I ended up having to bail at 28 kays. That was doubly disappointing, because I had heard about the monster climb just after 28km, where you had to use your hands to pull yourself up, and I never got to experience it.”

Bruce Arnett was South Africa’s highest placed finisher in 36th, finishing in 7h49m, followed by William Robinson’s 68th in 8:48, despite a heavy fall. Su Don-Wauchope came 77th in 9:02, finishing 13th out of 25 women, while Katya Soggot bravely limped home 104th in 10:42 after her knee gave out at 35km. Like Jeannie, Iain Don-Wauchope was suffering from flu and had to bail after 40km, having been second overall through the 28km aid station.

As Katya wrote in a post-race report, “None of us were close to being suitably trained to tackle it at our best, but well aware of our position, ASA’s main agenda was commendably to put SA on the World Trail Champs map and gain experience to help with preparing for next time.” Although disappointed not to have finished, Jeannie agrees that they gave it their best shot. “All things considered, our team raced phenomenally well, and it laid a good foundation for the next World Champs in 2013, where I’m sure we’ll do better.”

ATHLETIC PEDIGREE
This was actually the third time Jeannie has represented her country, although it was the first time as part of an official SA team. In 2004 she finished second in the SA XTERRA off-road triathlon champs and qualified for the XTERRA World Champs in Hawaii, where she finished 12th, and in 2008 she won the Triple Challenge off-road triathlon in KwaZulu-Natal and won a spot in the Coast to Coast Challenge in New Zealand, the unofficial world off-road multi-sport champs, where she finished fifth.

Now 31, Jeannie was born in Somerset West and grew up on the family apple farm, the youngest of three children. She was always a sporty child, and says her mom loves telling the story of her first ever race at school. “I apparently came home from playschool, saying I ran a race today and won, and beat all the boys!” In high school, she participated in all the ‘normal’ school sports, including running, netball, hockey, and swimming. After school her parents moved to Stellenbosch, where she attended university after a gap year overseas, eventually completing an Honours degree in Sports Science. The running bug really bit at varsity when she joined her siblings in a social running group and began doing races – although she was still fairly relaxed about her running… “I had a helluva good time being a student runner. I remember one time getting home from the pub at 5am and then being picked up at 6am to drive to the intervarsity meet in Pietersburg!”

MAKING NEW FRIENDS
Through various friends she was introduced to other sports, but says she was doing them more for fun and not focussing on them – and thus winning the SA Duathlon Champs title in 2002 came as a bit of a surprise. “It was great just to meet different people and try different sports. For example, my friend Tim Ziehl got me into mountain biking and adventure racing, and I did my first ABSA Cape Epic with him in 2005. A year later I rode my second Epic, this time with Geddon Ruddock, and we finished second in the mixed team category.”

Getting into multisport events also led to her meeting her future husband, although she didn’t know it at the time. “I was doing a triathlon near Stellenbosch in 2001, and was lying second in the women’s race in the run leg. I passed two guys and the one decided to stick with me and help me try to catch the first girl. I remember he gave me a little push on my bum and said, ‘Come on, catch that girl in front.’ I didn’t know who he was until after the race, when my boyfriend at the time told me it was Martin Dreyer, multiple winner of the Duzi Canoe Marathon. A few months later, Martin invited me to do a sprint adventure race with him, which we won thanks to him pushing me all the way, but then I didn’t hear from him again till 2007, when he invited me to do the Swazi Challenge adventure race with his team. Since then we’ve been inseparable.”

Married today, Jeannie and Martin have a young son named Callum, born in February 2010, and live near Pietermaritzburg, where Martin has established a sports academy for the kids in the Valley of a Thousand Hills, focused initially on canoeing, but now including running, mountain biking and multisport. “There are some incredible athletes with huge potential in this area, and I love training with them, because they just get such a kick out of all the sports they can now do,” says Jeannie. “Over the next three years we plan to extend the programme to all 70 rural schools in the corridor between Pietermaritzburg and Durban, to expose as many kids as possible to the opportunity to participate in sport.”

Jeannie says that being a mother has changed her priorities, but training as a pro athlete remains important to her. “You have to make a plan to still get your exercise in, or you become grumpy – and a grumpy baby plus a grumpy mother is not a good combination! Luckily for me, Martin is a magic dad and loves spending time with Callum, so I do get time to myself. But I can’t wait to have another baby. I would love to have a little girl, so we can do creative arty and cooking things together.”

OTTER DEFENCE
At the time of writing, Jeannie was preparing to defend her title in the Otter Trail Run at the end of September. “It’s an incredible race, with a lot more running than I expected – I thought it would mostly be rocky, gnarly sections, because we run a route in one day that people normally hike in five days. It would be nice to do it casually one day to really take in the beauty, but my goal this year is go faster than last year and hopefully win it again.”

Jeannie, who competes in the colours of her sponsors USN and Hi-Tec, says that running remains her favourite discipline. “Trail running is the easiest, because I have no worries about equipment, but I go through phases when I’m tired of running and loving mountain biking, and vice-versa. I really enjoy multisport events, where I can put them all together.” For that reason, she says her favourite event is the gruelling seven-discipline Totalsports Challenge, where she has won the women’s individual title four times.

Still, she has to think for a long time when asked what the highlight of her career has been… “I have so many great memories, and feel lucky that I can do so many things. I love that I don’t have to be selective, and can take part in whatever I choose.”

UP THE CREEK
Unsurprisingly, being married to the Duzi King saw Jeannie getting into paddling as well, and she has fond memories of being heavily pregnant and still winning the mixed doubles category with Martin in a few races. “It was a bit of a cheat for me, really, being treated to the backseat behind the Duzi King!” Fortunately, Jeannie says she her paddling skills have improved since her early attempts, when she still found it hard to control the one-seater… “Mart went overseas for an event and while he was gone I took part in a local race and proceeded to wrap the boat around every rock in the river. I had the boat repaired before he got back, but he noticed it immediately the first time he picked it up, because it was two kilograms heavier!”