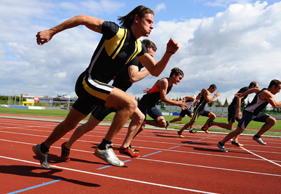 So, you want to become a top level professional athlete and make it on the world stage, go to the Olympics and World Champs, tour the world, get lucrative endorsement contracts, and get rich along the way as well, but you’re not exactly the world’s best runner… Not to worry, say some experts, because if you (just) put in 10 000 hours of training, you WILL reach the top and achieve your dream. So, all it will take is two to three hours of training a day for eight to 10 years, and a belief that you can be something special. Sounds simple, doesn’t it?

But it isn’t that simple, says renowned sport scientist Dr Ross Tucker, who is based at the Sport Science Institute of South Africa in Cape Town. “Several books and articles have recently been published that quote the 10 000 hour theory, which has its origins in a 1993 study by Anders Ericsson, where he looked at the performance ability of violinists, and showed that their playing ability was determined by the cumulative hours of training up to the age of 20. The best expert players had accumulated the magic number of 10 000 hours whereas those classified as merely good or least accomplished were found to have done only 8 000 or 5 000 hours of practice, respectively.”

“However, if the theory is that 10 000 hours of practice are needed, then you should not find a single person who has succeeded having done fewer than 10 000 hours, and nor should anyone fail having done their 10 000 hours. But it’s conceivable that there is a person in the least accomplished group who does 10 000 hours without cracking that performance level, and a person who does less but succeeds.” Here Ross quotes the example of Gobet and Campitelli’s study of chess players, where they looked at the time taken to reach the Master level. They found that one player did so on 3,000 hours, another took almost 24 000 hours, and some kept practicing but not succeeding. “That’s a 21 000-hour difference, which is two entire practice lifetimes according to Ericson’s model of practice. It seems pretty clear that practice, while important, is not sufficient for some, while for others, it’s not even necessary.”

BUT WHAT ABOUT SPORT?
Now these studies focussed on skill-based activities, but does their theory also hold for sport, not just the skills-based ones but also pure endurance-based codes? Ross can quote many examples of young athletes reaching elite competitive levels within a short period of time of starting a sport, including American swimmer Michael Phelps, the most decorated Olympic medallist ever. These quick learners rarely need 10 000 hours to get there – one netball player from Australia made the international stage on a mere 600 hours of play. “My question is, how does one athlete become a world champion at 16, with relatively little training, whereas thousands of others, who train more over a longer period, will never even make the national team, let alone become a world champion? The answer is genetics and innate talent.”

“Of course, practice is vital for success, especially when you have a competitive sport where many are vying for the same medal. In that situation, the person who succeeds must train hard. But their ability to get more out of training, and also to start off from a higher ‘baseline,’ is just as important, and those are factors influenced by genes. The 10 000 hour concept is a nice motivational tool, a way to encourage more training, to inspire people to improve. The idea for elite performance is that the right person hears this and believes, and then does the training. But to attribute success to 10 000 hours of training, and to dismiss that genetics play a significant role, is not only grossly over-simplified, it’s wrong.”

As Ross puts it, producing champions is incredibly complex. The success of Kenya at distance running, or of Jamaica in sprinting, is due to hundreds of different factors, all interacting with one another, including not only socio-economic conditions and local culture, but also genetic factors. Therefore, if you take 100 aspirant athletes in Kenya, and 100 aspirant athletes in the USA, and expose them to the same training, you will not see anything like the same success rate – Many more Kenyan athletes will reach a higher performance level. And that is due to complex genetic differences.

ELUSIVE CHAMPION GENES
The problem is that genetic influence on exercise performance is dizzyingly complex, says Ross, which is why, despite the best efforts of scientists to identify definitive ‘performance genes,’ they have failed. This has been interpreted in some quarters to mean that these genes don’t exist, and therefore that training counts for everything, but the reality is simply that the contributing genetic factors to sporting success are too numerous, with too small an individual influence, and too complex to find… for now. “There is no such thing as a single gene that makes one person tall and another short. Instead, there are hundreds of thousands of different gene variants, and these variations change the phenotype, the effect of the gene, so that you and a friend may have the same gene, but you have different traits or characteristics. Now if we can’t identify a single gene that determines height, imagine how complex it is trying to find a gene that determines athletic performance!”

“Height is almost certainly simpler than something as complex as athletic performance, yet it requires almost 300 000 different genetic variants, and that helps us explain only 45% of it! How many more gene variants or DNA sequence variations might it take to explain sprint or endurance performance? This is why those genetic tests that supposedly tell eager parents whether little Timmy is going to be a sprinter or a distance runner are so over-rated. These tests screen for several genes, including perhaps the most famous performance gene, ACTN3, which is supposedly linked to elite sprinting performance. The problem is, the studies comparing Jamaican sprinters and east African distance runners find no differences for that particular gene. So critics are quick to point out that since the performance gene can’t be found, then it clearly doesn’t exist.”

CONCLUSION
However, Ross says he can still appreciate the value of Ericsson’s model, because it reinforces that we must better manage our entire sports environment to ensure that more potentially successful athletes are exposed to good coaching, good diet, competition, etc. This has implications all the way up to government level, where policies around sport are determined. “For example, in South Africa, sport is less accessible than it should be, partly because of the removal of sport from our school curriculum. We also have a dearth of coaches, and few facilities – and these factors combine to greatly reduce the chance that we’ll produce a great distance runner, regardless of the talent we have. It also has implications for parenthood, in terms of understanding whether a child should specialise early or be encouraged to be as diverse as possible with their sport choices.”

Ross concludes that it all starts with genetic potential. In high performance sport, there is no such thing as alchemy – you cannot make gold out of other metals. If you want to produce a champion, a gold medallist, then you must start out with the right raw materials. “Everyone will improve as a result of training. The lucky few will start out at a level that is higher than the rest, and will improve more rapidly through training. That this is linked to genes is unquestionable. Therefore, to become an Olympic champion, the very best of the best, you need to tick all the boxes. Genes is without a doubt one of those boxes, but so too are training opportunities. And so, is success genetics or training? It’s both. In fact, it’s 100% genetic, and 100% training.”