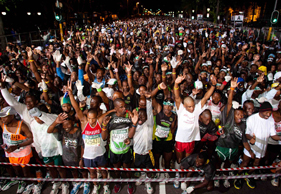 It all started with one man’s dream of uniting the runners in his neighbourhood in the northern suburbs of Johannesburg… and his need for a running partner. From humble beginnings in 2005, Sunninghill Striders have grown from one small running bus to a 370-member club, thanks largely to the passion of club president, Robin Hide.

Robin explains that he wanted to get back into running in 2004 after a lengthy sabbatical from the road, during which he had also moved away from his previous club, so he was all on his own when he hit the pavement again. “While running, I noticed there were a number of runners and walkers on the roads of Sunninghill, and I thought to myself, why not unite them as a community-based club?” There were a few speed bumps initially, but once things took off, they really took off, and today the blue and gold Sunninghill Striders vests can be seen in great numbers at many races. For example, the club went from a mere 16 runners at the Comrades Marathon in 2006, to 138 this year, and having 94 finishers saw to the club ranked the fifth highest club in Gauteng and 10th nationally, something which they are all very proud of.

Robin says the club’s official birth date is 27 September 2005, since this was when their first official time trial took place. They were registered with Central Gauteng Athletics earlier that year and they adopted the St Stephen’s Anglican Church as their home base. The time trial still starts and finishes at the church, and the club has plans in the pipeline to build its own facility on the church grounds for club events and a place to keep club memorabilia.

CLUB LIFE
In its six-year existence, Striders has established several traditions and Robin believes one of the reasons why the club is so popular is because of its healthy social life. With a New Year’s morning run and breakfast, Two Oceans farewell, Comrades farewell, post-Comrades Aches and Pains party, formal President’s Dinner and Awards function, Spring Clean run, informal year-end function and a Christmas party, members usually do not have to wait any longer than two months before they can party up another storm. Most of these functions take place in the Sunninghill neighbourhood and make use of local sponsors, enforcing the idea of being community-based. Add to this the discount members get from local shops and restaurants, and you have a symbiotic relationship between the club and community, where both parties support each other.

The formal President’s Dinner in July is the highlight on the club’s social calendar. Robin says this is actually their year-end function, because he believes the running season runs from Comrades to Comrades and not from January to February. “If you want to have an event like this in November, you compete with work year-end functions, so we found having it in July works better. Also, at this stage of the year everyone’s Comrades and Two Oceans memories are still strong, so this is a good time to award prizes for the best runners and most improved, etc.”

If club members do not get enough of each other at these events, there will always be Camp Sunninghill as well. Robin explains that where most clubs erect a gazebo at races to provide some shade for their members, Sunninghill takes things a bit further. At most big races you will see four blue and gold gazebos, a change room tent and a kitchen tent where the Striders will be enjoying the race day atmosphere long after most people have left fo home. If the race isn’t that big, they stick to one gazebo, but the Sunninghill spirit will still be the same.

THE BUSINESS OF RUNNING
Despite this vibrant social life, the club’s main focus remains running, and its time trials and club runs are some of the best supported in Johannesburg. The time trial takes off on Tuesdays at 6pm and Robin says an average of 100 runners usually take on the challenging 4km course. He admits that only about 10% of these runners are club members, with the majority of participants being “weekend warriors,” but this doesn’t bother him in the least. “The roads are there for everyone and anyone is welcome!”

On Tuesday and Thursday mornings approximately 50 runners set off from the local Shell garage for their morning run, and anything between 60 and 70 runners will take part in the longer weekend runs that start at the same place on Saturdays and Sundays. These runs have also grown exponentially from a handful of runners in 2005 to the numbers they average today. Though Robin says there are no official training ‘schools,’ the group usually splits up into four smaller groups, with the front runners averaging 3:20 per kilometre and the last group about 6:30.

Some of the club’s best runners at the moment are Pam Hampton, who regularly features on the podium in the grandmasters category, and Margaret Boshoe, who is usually not far behind in the same category. Patrick Montso is a promising youngster while Renata Vosloo is also a talented runner. Most recently, Kim Laxton joined the club and Robin is excited about the performances that she will produce while wearing the Sunninghill vest.

PASSION AND PRIDE
So except for the fact that members get discount at their local shops, what makes Sunninghill Striders different? Why do they have so many members and keep on growing? Robin says the passion that goes into running a club is enormous and between himself, the committee and the members, there is plenty of passion and pride going around. With an attitude like this, it is no wonder that the club has enjoyed such success in such a short time – and it seems like this club is just getting started.