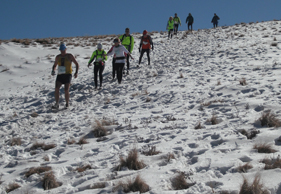 My 2011 run was slightly different than my usual Rhodes runs. Standing at the start dancing in a polar bear outfit on top of a trailer with the race organiser is certainly a change from trying to get a fast start up the mountain and attempting to hang on to the leaders.

Running (slowly) out of Rhodes, we had huge support, lots of laughs and more than a few “Go polar bear” shouts of encouragement. Our first goal was to get the first 13km out of the way at a reasonable pace, so as to take the pressure off. This went without hitch, apart from when I had to break for a pit stop. There were several runners around who had been waiting to see how I accomplished this in my outfit, and many photos were taken and words of encouragement given (but quite a bit of time lost). Job done and we headed off into the Kloof.

The Kloof was a lot of fun, especially the Klippies in the Kloof, with plenty of laughs, photos, lots of polar bear jokes and promises of donations at the end (don’t forget, Rhodes Runners!). Running with a first timer, I had the normal ‘newbie’ question as we progressed around the Kloof: “Is this Mavis?”… “Is THIS Mavis?”… No, THAT is Mavis Bank… “Oh dear.”

Mavis went surprisingly smoothly, probably because it was a lot easier to walk in the suit than run! We ‘raced’ up to a tumultuous welcome from the girls and guys at the top, refuelled and headed out along Lesotho View. The next section proved beyond doubt that polar bears are not happy with the melting of the ice cap, and DON’T do mud well. The mud was a bit of a challenge, and I doubt the suit will ever be the same. It was a pleasure to get onto the off-road section at Hooggenoeg Ridge, and enjoy the grass (and snow) over the Peak.

GETTING WARM IN HERE
Coming off the mountain, I was worried about the heat, but we were greeted with a pleasant cool breeze for the last (normally warm and dry) section. Although the suit was starting to take its toll, we trotted back towards town at a reasonable pace, with the only hitches along the way being the local dogs seemingly quite keen to take on the bear and prove their bravery to their masters, much to the hilarity of the locals.

The last water point was a great stop, with the children fascinated by the suit, showing complete amazement and bewilderment and giving lots of encouragement. We trotted off with the kids in tow for a few metres. Finally, Rhodes village came into view and it was a great relief to turn into town and run the last short stretch to the finish, to be greeted by the organisers Darrell and Evie Raubenheimer, and lots of support.

Post-race I realised I was pretty dehydrated (I had sweated off 4kg in the suit), but other than that all good. Now to clean the bloody suit before I take it back to the costume hire shop!

THANK YOU!
Thanks to Evie and Darrell for allowing me to run – I know you had your reservations! Thanks to Amy for all the help with the outfit and patching up the old broken body, thanks to Lionel for the support, political arguments and laughter along the way, but mostly thanks to all who generously gave to the Rhodes Public School cause.

SECOND GENERAL REPORT
Rhodes is not for Sissies!
“Deceptively friendly, but brutal.” “Underestimated the harshness.” “Hits you hard when you drop your guard.” The 23rd Liberty Medical Scheme Rhodes Trail Run invoked numerous post-race comments, pain, nostalgic memories and a few nightmares as the hills around the village accumulated exhausted and broken runners.

The traditional friendly Rhodes welcome at registration concealed the toughness that was to follow on race day, although the pub at ‘Walkerbouts’ did give some caution with their boldly displayed ‘Rhodes is not for sissies’ sign. The complimentary glass of sherry at registration warmed the nervous glances as runners signed in.

RACE MORNING
Race morning arrived with the village startled into wakefulness thanks to Race Director Evie Raubenheimer’s 6am pealing of the church bell. This 23-year-old ear-bursting tradition serves to ensure no one oversleeps on race morning.

Clear skies and a temperature at the start line of minus-10.4?C heralded a crisp, windless and pleasant day for runners and helpers alike. With the run’s theme song thumping in the background, the start whistle was blown at 7am and the 290 runners who had registered set off in a kaleidoscope of Rhodes Trail Run Buff? headgear.

OFF THEY GO!
By the time the runners moved into the Kloppershoek Valley, the race at the sharp end had narrowed to a handful, with Barkly East’s Sydney Speelman and Gauteng’s Trevor Toerien leading to the Mavis Bank Farm Checkpoint. They were followed by Hylton Dunn, Paul Wolff and Lance Chapman. The first ladies were Belinda Hickman Mosdell and Linda Gray.

As the weak winter sun glimmered over the hills the early runners met up with the thawing children from St Dominic’s Priory Port Elizabeth, who had hiked into the kloof on the Friday to overnight and set up a feeding station. With temperatures dropping to minus-14?C in the kloof, the children were as pleased to see the runners as the runners were to receive their support after splashing their way through ice-fed streams.

The border road was slippery with slushy thick mud in sections thanks to snow melt. The snow along the hillside made a pleasant distraction, with many runners taking a breather and capturing photo memories. The ankle-deep snow along Hooggenoeg Ridge created an almost festive feeling, although by then most legs were too weary to enjoy it.

The feeding station adjudged the best on the day by the runners was the ‘Walkerbouts’ checkpoint at the Hooggenoeg Hikers Hut, where Dave Walker put on a welcoming spread, including his traditional pot of Karoo oysters.

VICTORY
Trevor Toerien held onto his lead over Hooggenoeg Point and into Rhodes, and was the first to hear the welcoming church bell as he finished in 4:43:15. Hylton Dunn secured second place in 4:47:31, passing a tiring Sydney Speelman 2km from the finish. Sydney is clearly a potential future winner of this brutal event, after claiming third place in 4:51:00.

Sarah Gray was first lady over Hooggenoeg Point and cruised to her first Rhodes Trail Run title in 5:48:40, looking as fresh as when she started. She was followed home by Sue Chapman (6:11:13) and Belinda Hickman Mosdell (6:22:30).

Paul Wolff, Race Director of Ironman South Africa, finished fifth and received the first of the 49 Snowflake permanent numbers awarded this year. The blue and silver Rhodes Snowflake numbers are presented to runners who complete their third Rhodes Trail Run.

There were 248 runners who completed the course inside the nine-hour cut-off, coincidently the same number of finishers as in 2010. A significant number made it down the mountain courtesy of the Amarok support vehicles, the run yet again proving that it deserves respect, with the altitude, terrain and temperature demanding more training from the runners than some offered.

It all happened because of a phone call from Sonia Beard and Brian Key that I was fortunate enough to participate in this year’s incredible trail run at Rhodes.

The village of Rhodes, renowned for its cold climate, is situated very close to the southern border of Lesotho and lies at an altitude of 1821m above sea level in the southern Drakensberg. It was named after the famous Cecil John Rhodes, who donated a number of Stone-pine saplings instead of the much needed cash expected by the small community to boost the development in 1891. The village itself lies in a valley next to the Bell River, which has become a paradise for fly-fishermen. Just to the north, the great snow-covered peak of Ben Macdui at 3001m is visible, the highest in the north-eastern Cape. On the foothills of this peak, which the runners eventually run along, is the ski-resort of Tiffindel.

On the morning of the 52km run it was minus-10.4?C, so it was necessary to have appropriate clothing and good trail-running shoes, as it is pretty wet underfoot running through streams, mud and snow. The scenic route with its steep gradients and sharp bends is not for the faint-hearted, but it would be hard to imagine a more stunning location for such an adventure.

The cost of the event was only R440.00, which includes a goodie bag, a super First Ascent performance base layer top, wonderful medal and bottle of sherry! This is certainly an event not to be missed if you love the outdoors and a decent challenge.

I was happy to finish within cut-off, receive my finisher’s T-shirt, medal and customary bottle of sherry. That night there was no ‘Polar Bear Club’ for me, as the ‘action’ was to happen at midnight and this frozen Rhodes runner was fast asleep in bed by 8:30pm, wearing many layers of clothes, under duvets and many blankets. I certainly wasn’t planning to take off any blankets, never mind my clothes! (According to Rhodes tradition, to become a member of the Polar Bear Club, one has to crack the ice on the frozen Bell river with one’s naked toe and plunge into its icy water wearing nothing but a silly grin. Experiencing is believing!)

Now let us hope I can get an entry for next year, as I will have to go back and run it again, this time hopefully IN SNOW!