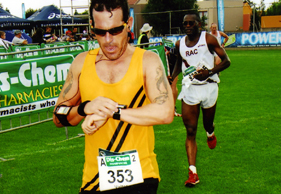 Becoming a drug addict had nothing to do with my upbringing, family life or any other dysfunctional story that leads some people to do drugs. A lot of perfectly normal adults get caught up in this trap, simply by being too arrogant to recognise that it could happen to them! Well, after trying my first ecstasy tablet and having been told that it was so awesome, I spent the next year trying to experience that first high, which truth be told is nice. However, what they forget to tell the novice drug user is the down side of the drug, which at times wanted to drive me absolutely crazy with depression and a feeling of uselessness. I would, on an average weekend, take up to 20 pills, but the anticipated high never came. In fact, the more drugs I took, the lower and more depressed I felt.

After having taken ecstasy for about a year, I was offered a new drug called CAT. Again, I was told how great it was and again I foolishly went ahead and took it. Before snorting it, I looked at the line that was cut for me and I remember thinking to myself: “Walt, you are about to go on a rollercoaster ride that is going to get out of control!” But being an arrogant fool, I decided that I was smarter and in control of myself. That was the beginning of a three-year tornado that blasted through my life, and more importantly, through the lives of my family.

DESTRUCTION
Not only did it damage my health, drain my finances and alienate my clients, who lost faith in me, but sadly my ‘girls’ (wife and daughter) eventually asked me to get out of the house because they could no longer live with me and my erratic behaviour. You see, throughout 2004, the drug got a hold of me so tightly that I was taking up to 10 grams a day. I would go without sleep for days, would not eat, lost a lot of weight and became terribly paranoid. Eventually on 15 October 2004, my family left me at home during one of my neurotic outbursts and would not come home. My daughter didn’t even want to talk to me on the phone, let alone see me. She stayed at a friend’s house, refusing to come home.

I eventually convinced my wife to come back and when she came home, I took the stash that I had on me and flushed it down the drain in front of her. And so my self-rehabilitation started. Little did I know what was in store for me, but I eventually did it “cold turkey” with the love and support of my wife.

FIGHTING WITHDRAWAL
I spent the next three months fighting my withdrawal. I did not even have the courage to walk out of my room. I stayed in there and slept for days on end, only to wake up, eat and sleep. I was so disconnected from the world, that when the 2004 Tsunami in the Far East happened, I was oblivious to it until some time later. I also ate myself from the sickly, unhealthy 75kg frame to an overweight 100kg. One morning in early January 2005, I woke up from what seemed to be a deep sleep and as I opened my eyes, the world became clear of the glaze that I had had in my eyes for years. I felt that day that I had turned the corner.

I started the fight to get my mind and body healthy. You see, had I been in a rehabilitation centre they would’ve helped me with my mental state in conjunction with the physical. But I decided to pull myself together, be humble and address my problems one by one. Which I did!

STARTING OVER
I got myself back into a gym and what a struggle that was. One day, for some reason, I decided to climb on a treadmill and attempt to run a little. I did a 10-minute session and loved it. Soon I was pushing the sessions from 20 minutes through to one-hour sessions, and I always climbed off the treadmill feeling a high.

A few Comrades running friends of mine would see me on the treadmill and they would often invite me to go for a run on the road with them. My response was always the same: “Me on the road? No way!” One day while running on the treadmill, one of the personal trainers told me I should raise the inclination on the treadmill, as that would help me get fitter and stronger. So I did, and before long I was running my entire session on inclination and as fast as possible.

BECOMING A RUNNER
Early in 2006 friends invited me to go for a 6km run on the road and I finally accepted. I loved it, and that was the beginning of my new and now permanent high. I quickly joined Johannesburg Harriers and started training for my first race; the Tough One 32km. Little did I know that even though I was now doing something healthy, if I overdid it I would break down – and I did. Injuries plagued me continuously as the transition from soft treadmill to the hard road took its toll on me, and shin splints in particularly were a problem.

Nevertheless, I pressed on and did my first Tough One in 3:06. I was so happy that day. I could not believe that I had just finished that race and declared loudly to a friend that I wanted to run Comrades. He looked at me, this totally exhausted novice, and said, “Walt, Comrades is this race times three!” I said I didn’t care, I would do it!

I continued to run with shin splints until one morning while out on a run, I heard a bone make a funny noise. I had a stress fracture, and was forced to take three months off, but all the while I couldn’t wait to get back on the road again. I did eventually get back, but for the next three years I could never get myself ready enough for Comrades. All types of injuries plagued me continuously and my running was confined to a social type activity.

MEETING THE RIGHT COACH
In 2009 I decided to enter a marathon with the aim of finishing in sub-four hours. I eventually finished in 3:50 and thought that would be my qualifier for Comrades 2010. Then I met John Hamlett in September 2009 and he kindly agreed to coach me. I explained to him that I had been plagued with injuries and he famously said, “Don’t worry, I will take you to the mountains and fix you.” I thought I had just met a lunatic, but I also knew instantly that this is what I wanted for my running. John also put me on a special diet and within three months I lost 17kg. He trained me from a 3:50 to a 3:14 marathon, and I was full steam ahead for Comrades 2010.

Training camps with John consist of him taking his athletes to the mountains of Dullstroom in Mpumalanga. Average runners like myself get to train with professional Comrades gold medallist athletes and gain experience of running with them. Running in Dullstroom is a feeling of absolute bliss; it is out in the countryside where you can run for hours on end with no site of a car, or even people at times. (Just watch out not to tramp on a snake though!)

PUSHING MY LIMITS
Over Easter 2009, we were in Dullstroom on a training camp. I’d been running for some two hours on my own – the pro’s had left me for dust! – when I saw John riding his bike towards me. I thought he was coming back to keep me company. Well, he did keep me company, but he also told me to pick up the pace! After having already run for some five hours that day, my pace was suddenly pushed from 5min/km to 4min/km and he kept me at that pace for a good 30-minute stretch.

After that session, John told me – knowing that I’d been a heavy addict – that he wanted to show me what our bodies are capable of doing when we treat them well. After that training camp, I also realised what he had meant about “fixing my injuries in the mountains.” You see, my injuries are gone. That’s not to say they won’t ever come back, but I’ve learnt how to look out for the injuries and avoid them for most part.

MY FIRST COMRADES
One day while out running with some friends, we came across some guys who we considered to be great runners, as they had finished Comrades in about 8:30. Back then I thought I’d be happy with a 10-hour first Comrades finish, but to my surprise I ran my first Comrades in 8:21. All I can say is “Thank you, John Hamlett!” I would love to run a silver at Comrades within the next five years, and after seeing what I can achieve with the right preparation, I fully expect to do so in 2012, with a sub-7:00 within five years.

This year I didn’t run Comrades due to work constraints, which meant I could not put in the training required. I have promised myself never to line up at Comrades unless I’ve trained properly, and I knew that I wasn’t trained properly this year. So for now I’m focusing on running a sub-3:00 marathon and building towards Comrades 2012.

NEW LIFE
Coming into the Comrades finish in Durban last year, experiencing the crowd literally sucking you into the stadium, and seeing my wife as I ran into the stadium, I realised that without a doubt in my mind, there is no high like a runners high! I therefore now have a new outlook on life, and I want to say to all ‘would-be’ and current addicts: “If you want a real high, try some running. Enter a small race and experience that for a high.”

To my friends Mario Nunes, Ivor Biddlecombe and Steve Hugo, who helped me so much when I started running – THANK YOU!