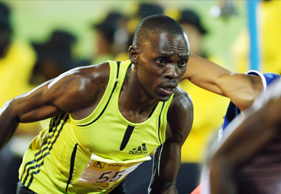 The 1996 Olympic Games in Atlanta, USA, will always be remembered for a particular landmark in South African sport: Hezekiel Sepeng’s silver medal in the men’s 800m. That’s because he not only became the first South African male to medal on the Olympic track since 1928, but also the first black athlete ever from this country to medal at the Olympics. It was a breakthrough moment for the fledgling New South Africa. That medal was just one of many that Hezekiel brought home to a proud nation, along with two Commonwealth Games silvers (1994 and 1998), silver at the 1999 World Champs and IAAF World Grand Prix Final, All Africa Games bronze in 1999 and African Champs silver in 2004, and a gold in 1995 and silver in 1997 at the World University Games. This record of so many silvers may seem an ultimately frustrating record to some, but anybody who understands the intense physical and tactical battle that is the 800m event will quickly tell you that Hezekiel remains one of the world’s all-time greats in the event.

EARLY DAYS
Born in 1974, Hezekiel grew up near Potchefstroom and started running cross-country at school, where he was spotted by legendary coach J.P. van der Merwe, then a schoolmaster at the prestigious Potchefstroom Boys High School. With Apartheid coming to an end, Hezekiel was one of a number of promising young black athletes offered a sport scholarship to the school, where he raced anything from 400m up to 3000m, but it was the 800m where he began to shine. “The 800m was the one where I was improving most, and in 1992 my times were close to the SA Junior record of 1:48.04 – I ran 1:48.80.”

That saw him selected for the 1992 World Junior Champs in Seoul, where he finished fifth, and then the 1993 World Indoor Champs in Toronto and the 1993 World Champs in Stuttgart, where he again finished fifth. However, Hezekiel says he had to overcome his own doubts to reach that final. “The night before my first heat, I saw that I was up against three guys who had run 1:42, while my best was only 1:45.” But he went out and won the heat, qualified for the semi-final round, where he finished third in a new SA junior record, and made his first big final. Then came his first major success on the world stage, a silver medal at the 1994 Commonwealth Games in Victoria, Canada. “People started taking notice of me after that, because I was the first black athlete from South Africa to win a medal on such a big stage.”

UP AND DOWN
Having enrolled at the University of Johannesburg in 1995 to study sports management, Hezekiel went to the World University Games and came home with a gold, but then dropped out of his course before the end of his first year to focus on his training and the upcoming 1996 Olympics. “I only managed fifth in my semi-final at the 1995 World Champs in Gothenburg, so I said if things don’t go well at the Olympics, I will go back to university. But it did go well, I won the silver and set a new SA record, and so I turned pro.” However, that Olympic success brought with it huge pressure, both on and off the track, says Hezekiel. “Seb Coe said in an article that I was the next 800m world record holder, which put a lot of pressure on me to perform, while I put myself under even more pressure as well, and I remember I didn’t have a good season in 1997.”

Thus he enrolled with UNISA to study teaching, which once again qualified him for 1997 World University Games, where he picked up another silver, but he was really disappointed with seventh in the semi-final at the World Champs in Athens later that year. Fortunately, things then clicked for him as he claimed silver at the 1998 Commonwealth Games in Kuala Lumpur, and he dropped his studies again to train full-time, which saw him selected for the 1999 World Champs in Seville, where he once again took silver. “I think 1999 was my best chance of gold, but I think I actually cost myself the gold medal in the end. I was still ahead with 60 metres to go, but I knew I had the Olympic champ and world record holder Wilson Kipketer right behind me, and he had never been beaten on the outdoor track. With 20m to go he passed me, but I came back at him, and as I dipped for the line, my arm accidentally bumped his shoulder and I basically pushed him over the line – and he won, 1:43.00 to my 1:43.20!”

SLOWING DOWN
For the next few years, Hezekiel continued to make numerous top level finals, including the 2000 Olympics in Sydney (finishing fourth), 2001 World Champs in Edmonton (eighth), 2003 World Champs in Paris (seventh), World Athletics Final (sixth) and All Africa Games (eighth), and the 2004 Olympics in Athens (sixth), but after regularly being on the podium so many times, this period of his career proved somewhat disappointing, especially Athens, since it ultimately proved to be the last time he represented his country – although he didn’t know it at the time.

Then came the bombshell. In January 2005, Hezekiel was tested out of competition for drug use, then was tested again that April. In May he ran a World Champs qualifier at the SA Champs, but then the IAAF called to say he had tested positive in January and was provisionally suspended. “I asked for my B sample to be tested, paid for a doctor from Holland to go to Barcelona to check the results, and the test came back negative, but the IAAF said it was inconclusive and that they were going to retest my A sample. This all took forever to get done, and by the time they finally told me my retest was positive, I had already been sidelined for nearly two years, and the suspension they gave me was just about finished already!”

“I was tested more than 50 times in my career and the results were always negative, and I still maintain that I was innocent and they made a mistake. I was advised by an ASA lawyer that I can take my case further, but I had already been knocked down financially, and things were falling apart in my life – I had two sons to look after and my marriage was failing. Just pursuing the B test had already cost me half a million rand, so I decided to drop it and just try to make a comeback, but at that age, on top of everything that had happened in my life, my best years were over.”

STILL KICKING
Hezekiel took bronze at the 2009 SA Champs, but realised he was now running only the smaller meets in Europe and not really making money, so he turned to middle distance coaching at the University of the North West in Potchefstroom. One of his athletes was his successor as SA’s top 800m runner, Mbulaeni Mulaudzi, who went on to win gold at the 2009 World Champs in Berlin. He also enrolled at the university to try to finish his sports management studies, but once again decided to drop out when ASA came calling with a job offer.

“I was originally called in to focus on grassroots development, but that fell through due to financial limitations, and instead I ended up becoming an athletes’ co-ordinator. I’m there especially to help new athletes who don’t have management yet, to organise races for them, or help them get commercial work and endorsements. After 15 years of running, and dropping out of university several times trying to be a professional athlete, I can’t just waste all that experience by not passing it on to the young athletes coming up today.”