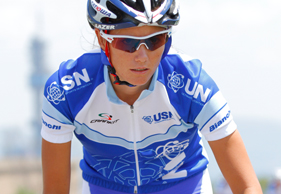 Cherise first started cycling when she was nine years old and it only took her three years to become a national champion. “My dad injured his knee plying rugby and his doctor advised him to start cycling for therapy. My parents then started doing fun rides on a tandem, along with my uncle and aunt, and it wasn’t long before my cousins and I joined in on the fun.”

At the age of 12 she won the national road bike and time trial titles before claiming both of these titles again at the age of 17 in 2007. She also earned a silver medal in the Junior World Championships in the same year. In 2008, at the age of 18, she became the youngest woman to win the Cape Argus Cycle Tour and was also crowned national road champion before going to the Olympic Games in Beijing, where she gained valuable experience. She was national road champion again in 2010 and won her first (double) 94.7 Cycle Challenge, when she finished first in both the road and mountain bike races.

This year has been one of her most successful yet as she was crowned national time trial champion in February and claimed her second Cape Argus Cycle tour title in March. We can also look forward to her lining up at the 94.7 Cycle Challenge in a few weeks to defend her title. With a string of achievements like this already at the tender age of 21, it’s no wonder that South Africa’s cycling community is excited about Cherise’s prospects at next year’s Olympic Games and beyond.

HARD WORK
Being the best in the country doesn’t happen by itself, though, and Cherise trains on average four to six hours a day. “After breakfast I train between two and four hours on the bike. After that it’s shower, lunch, nap, and then some more training, which will consist of a core workout or another easy hour on the bike before dinner and going to bed. I have always worked hard since taking up cycling, but I don’t think I do as many hours as some of the other girls. However, my intensity might be higher; I’m a big believer in quality over quantity.”

She admits she doesn’t really run during the cycling season, but Cherise says she does enjoy going for a run in the off-season to stay fit and work a different set of muscles to the ones she usually does on the bike. These runs are on average 5km, two to three times a week. She competed in a few triathlons and duathlons as well as athletics, cross-country running and swimming while at school, but says she hasn’t run any road races yet. It is not entirely out of the question, though, and she says she always enjoys supporting her mom and sister when they run, and participating in the Old Mutual Two Oceans might be a possibility in future. “Not the Comrades, though. I don’t think I can put myself through all that pain!”

THE FUTURE
For most of the year, Cherise is based in KwaZulu-Natal and competes in local races, while she spends about two months in Europe each year. This international experience is extremely important as she says the strength of South African cycling improves if more local cyclists compete overseas. “Every year we get closer to the international cyclists as more and more South African girls compete in Europe, and the level of local racing improves. We still have some work to do, but if we continue to improve the way we have recently, we will be competing with the best soon.”

For now, Cherise’s focus is on qualifying and preparing for next year’s Olympic Games. She says she will stay focussed on the road until after 2012 and then maybe start venturing into some more mountain biking, but her main focus will remain the road. However, first she wants to compete at the Elite World Championships in Copenhagen (19-25 September) and keep working towards the big one in London next year.