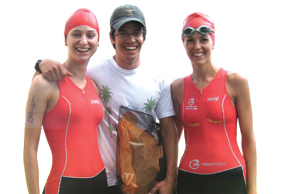 Troisport is one of the few clubs in the country catering exclusively for triathletes, and whilst they are learning as they go along, their membership has risen gradually and they are now solidly established, with branches in both Gauteng and KwaZulu-Natal. And it all started with three triathlon-obsessed friends who wanted to share the joy of participating in three sports on one day with their South African compatriots.

Whilst participating at the World Triathlon Championships in Hawaii in 2005, Marc Price, Werner Smit and Steve Pratt got talking and decided to launch the Joburg City Triathlon series when they arrived back on home soil. The first of these races was presented in 2006 and it was a huge success. But what the three friends never expected was that from this, the opening of a triathlon shop and a triathlon club would emerge.

The demand for triathlon equipment and advice was so high that they soon opened Johannesburg’s first Troisport shop in Sunninghill to answer this demand. Marc ran the shop on his own while Werner took charge of the race, but it soon became too big a job and they sold the race to independent organisers whilst staying on as official retail partners. Werner has since left Troisport to become race director of the new 5150 Triathlon series, but Marc and Steve are still involved as directors of the company.

The Troisport club was established soon after the shop opened, as the three friends shared all the knowledge they had acquired from competing and training overseas with new triathletes, helping them to train and prepare for their first triathlons. “We had lots of information to impart on people and wanted to encourage the development of triathlon in South Africa. In a short time, the club grew to 150 people,” Says Marc.

According to Marc, the sport of triathlon grows exponentially every year, and there are about 6 000 active participants in South Africa at the moment. He hopes this trend will continue and that more running clubs will start their own triathlon sections in order to encourage more people to take up the sport. He says there are only about six running clubs in Gauteng at the moment that offer their members this option.

WHY JOIN A TRI CLUB?
Marc explains that the governing of triathlons is a completely different ball game to running and cycling, because clubs for these two sports are incorporated into the governing bodies’ system, whereas triathlons aren’t. Where it makes sense to join a running club, get your licence and race for a year with that number, Triathlon SA (TSA) has no affiliation with triathlon clubs and financially it often makes more sense to simply compete with day licences instead of buying the more expensive annual licence.

Troisport membership gives athletes access to a running licence through the club’s affiliation with the Nedbank Running Club and to a cycling licence through Cycling SA. However, if they do not want to compete in running or cycling races, they do not have to spend money and buy these licences, they can simply join Troisport and learn from the other club members about triathlons.

As things have developed, he says the club has become less and less about training and more and more about information. “Triathletes join us purely on the basis of having access to running and cycling licenses and to have a place they can call their triathlon home. In a perfect world, we’d love people to come ride with us, but triathletes have to find time to train and often our times do not suit them. We are not a training club and not a social club. We can’t teach you how to do the sport, but by hanging around people who know a lot about the sport, you will learn more. We’re information heavy and will always share our knowledge.”

Though information is one of the best reasons to join the club, it is not the only one. Thanks to the close ties between the club and the shop, members get a discount of 5% to 7.5% on purchases at the shop as well as discounted rates at professional coach and club administrator, PJ Delmont. Because there is no rule from TSA that says members of a club have to compete in club colours, and because of the technical nature of triathlon gear, the club does not provide branded tri gear any more, but members do get a Troisport wind slip when they join as well as a bi-monthly newsletter. There are club runs twice a week, 15km on Tuesdays and 10km on Thursdays, and a club cycle on Saturdays, but Marc says because training for triathlons takes up so much time, these events are usually quite small because most club members have to train when it suits them and not necessarily when there is an organised club run.

A SENSE OF BELONGING
“I think the success of our club has a lot to do with the access to our shop. You feel like you belong to the shop and you have a place to hang out and call home. We also have a gazebo at most triathlons, where we have drinks, snacks and servicing for bikes, and the members like that. The fact of the matter is, there is no official reason why anyone should join a tri club if they want to do triathlons. However, people who are new to the sport and want to learn about the ins and outs of training, gear and how the sport works find that the club gives them a sense of belonging, along with loads of information, and that’s what has worked for us.”

Marc says Troisport has a base of about 70 “deathly loyal members,” but membership fluctuates during the year between 75 and 150 members because training is so time-intensive, and not everyone can make a full-time commitment to the sport.  “Most people start out with us and then realise if they want to really progress they should get a coach or join a coaching group, and then they move on, while others stay put. As the sport grows, so will the focus of what the club can offer, but at the moment people who join the club are looking to find other people who know how the sport works, and a sense of belonging. They get that here. This is surely one of the best options available for both established triathletes and anyone who wants to start the sport.”