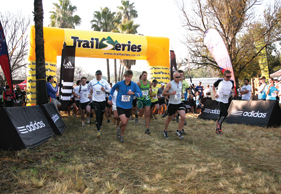 Four years ago, the Wildrunner team, organisers of the summer and winter trail series in Gauteng, Cape Town and KwaZulu-Natal, struggled to get 80 runners together at their first trail run in Gauteng. Four years on and how things have changed! At the first leg of this year’s Gauteng Winter Trail Series, the organisers were overwhelmed when more than 1 000 runners turned up to hit the trails. And though the sheer number of people caused a few registration glitches, they were sorted out quickly, and before long, the runners were on the trails, enjoying the fresh air, views and everything else that trail running offers.

LEG 1: GROENKLOOF NATURE RESERVE, 5 JUNE
This first race can be described as challenging and technical, but still quite manageable for the average athlete. It was clear that some runners were venturing off-road for the first time, while others were experienced mountain goats hopping along at the front of the field – but they all had to contend with the same terrain. As with most Wildrunner events, the route was challenging, but always rewarding.

The Groenkloof race started with a nasty uphill, separating the wheat from the chaff early on, but a few bottlenecks later in the course evened things out again. The technical sections caused the ‘mortals’ at the back of the pack to slow down, but the front runners seemed to have no fear as they actually increased their pace while dealing with steep descents, loose rocks and cliff edges without hesitation. Me? I walked down. I like my limbs attached to my body, thank you very much.

LEG 2: HENNOPS RIVER, 12 JUNE
The second race at Hennops River is widely regarded as the most difficult in the series. It started with two not-so-friendly hills and ended with two ‘baby’ hills, but the never-ending climb slap bang in the middle of the route made those ‘baby’ hills seem like two miniature Kilimanjaros, not your average Magaliesberg koppies! But as they say, what goes up must come down, and it was a pleasant run down to the river crossing before we could run the last few kays on a soft bed of leaves, meandering along the Hennops in the shade of huge blue gum trees. Gone were the cursing, crying and stumbling as I remembered why I was doing this.

That said, as most motor accidents happen 20 minutes from home, so too you have to keep concentrating right until you cross the finish line. Time and again I rolled an ankle or caught my foot on a blade of grass the moment I lost concentration, almost causing some serious damage to myself and the person in front of me. I learnt that you have to concentrate as hard when running trails as you do when running on roads in Gauteng, but for completely different reasons.

LEG 4: PELINDABA, 3 JULY
Being the winter series, the inevitable happened and I missed the third race at Segwati Game Ranch because of flu, but I was back for the last race, and my favourite, in the series. Starting on a gentle downhill, the field spread out and by the time I reached a gentle uphill, the muscles were nice and warm and it didn’t seem half as bad as I remembered the Hennops River hills. That was either because they weren’t half as bad as Hennops, or because my legs were aching to run again after the flu lay-off.

Just when I thought I was superwoman, however, there was a final farewell in the form of, you guessed it, something that looked like the Sani Pass! As everyone trudged up the hill, once again cursing under bated breath, I realised that trail running doesn’t get easier, no matter how many you do. But that’s what it’s all about, the challenge of scaling what seems like an endless hill, standing for a second at the top, taking a big gulp of fresh country air, savouring your victory and getting on with the race… it’s not supposed to be easy.

THE SUPER HUMANS
For most of us, trail running is about the experience, not the times we run, but a select few are not afraid to run as fast as they can, no matter how treacherous the route may seem for the rest of us. Like Thabang Madiba, who proved himself the fastest trail runner in Gauteng this winter, taking top honours in all four of the long races and walking away with the championship title for men. In the women’s championship, things were more even, with no one able to win more than one race, but Michelle Chong was eventually crowned the top woman based on her series performance. The top veterans were Trevor Toerien and Vanessa Bowman, while the top masters were Jose Rebordao and Angela Heyink.

The open categories in the short race challenge were won by Willem van der Merwe and Tarrin Dreyer, but it was the performances of the juniors (15-18 years) and minimees (11-14 years) that really impressed. Patrick Colborne was first in the junior category and would have taken the open category if he was allowed to compete as a senior. He finished first overall in two of the races and second overall in the other two, beating runners much older than him. In the minimee category, Simonay Weitsz seemed to get stronger as the series progressed and she took first place in her category ahead of boys and girls two years her senior. Her best result of the series was an overall fourth place in the third race at Segwati Game Ranch. KC Boshoff was the winner of the Peewee category (6-10 years).

The Gauteng Summer Trail Series kicks off on 16 October and promises to be as much fun as the Winter Series. Pack the cooler, load the kids in the car and get the whole family to experience trail running in Gauteng. Visitwww.trailseries.co.za for more info.