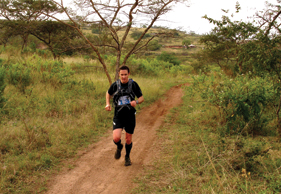 SO, WHO ARE THESE ‘CLOWNS’?
Well, the plain truth is; we are average heroes. We have no trust funds, no long-standing wealth or heritage, and certainly no large corporate expense accounts. What we do have in spade-loads, however, is a passion for the land in which we live, a passion for running on trails, and most importantly, a desire to make a difference wherever we can. We are a tight-knit ‘family’ of dirty-legged, trail-worn fathers, husbands and sons, that will climb any hill, cross any river and charge through any bushy scrub to put a smile on someone’s face.

You see, between the three of us, there are over 110 years of warm beds, solid education, clothes, meals, comfort and family. It’s these things that we can so easily take for granted. But now it’s our turn to give something back. Our model is simple: We run for those who can’t, and with the help of the generous folks around us, we aim to raise money for specific areas of need in the communities around us, be it disadvantaged schools, orphanages or places of safety.

What we rely on, however, is the support of like-minded members of the public and corporate organisations who are socially aware and determined to pass on some love to those less fortunate. The Trail Brothers won’t win any races, but we will certainly help a person, a family or a community in need, and that is the greatest prize of all.

Up to now we have formed a relationship with an organisation in Durban, called the Liv Village, which is a community-based project for disadvantaged youths in Cottonlands near Verulam. We are planning on running some events and staging one of our own, to raise funds for various projects within the village. The Umgeni River Run was the launch for this fundraising effort.

RACE DAY
It was 3:30 on race day and the three of us were left to contemplate just what we had gotten ourselves into. All the talk, all the training and all the bravado seemed to evaporate at the thought of the day that was fast approaching. Nerves were the only constant in our varying morning routines. We loaded up at 4:45 and started the journey down into the Inanda valley, and 35 minutes of hair-raising turns and steep descent later, we arrived at the start near the dam wall. Looking at each other with crazy eyes, we reassured each other that “We are warriors, men of adventure, kings of the mountains, aaarooooaarr!” At dawn, we found ourselves among a shivering tribe of equally nervous adventurers, under starter’s orders.

AND THEY’RE OFF!
At 6:15 we were off on our epic day-long journey. For the first 12km or so, we wound our way around the roads of Inanda Dam, ducking onto beautiful paths right next to the water. The sun was up and we were living the dream! Like early pioneers, we claimed the desolate inlets and beaches of Inanda dam as our own as we ran, by declaring “I hereby name this beach, Trail Brother Beach!” There were a few hills, but nothing too scary, and it was the perfect way to start the journey. We began to push the tempo a bit and had a cracker period through to the 30km mark, with no real problems.

WHEN PAIN SETS IN
Once we hit the 32km mark, however, everything changed. There before us stood a gargantuan mountain of a hill. A shy and forgotten Everest tucked away in the folds of the Inanda Valley. Do people actually live on this thing? Will there be enough oxygen up there? It was ridiculous! This saw us having to climb the equivalent of 600 vertical metres in 6km. Comrades only climbs 600m in 40km! Guy made up for the lack of running with swearing, Richard mumbled bad jokes, and Michael had no breath to speak at all.

Our legs took a hammering on the way up but got pulverised on the way down the other side. The entire descent to Nagle Dam was done on single track and weaves its way down through smallholdings and properties that are dotted all over the countryside. Once down on the valley floor, Nagle Dam awaited, and we had a beautiful jog around the shore on the soft sand, which helped the feet a bit, but annihilated the calves. The combination of the past 10km ascent, descent and soft sand took its toll on all of us and as we trotted to the 50km water table, it was evident that the first signs of real pain were setting in.

Straight after that we had a beast of hill to climb skirting around the upper fence-line of the Nagle Reserve, which seemed like it went on forever, and then just as we yawped with delight at cresting the hill, we were faced with another quad-mincing drop to the next valley floor and our first river crossing. A short jog on the other side and we had our second river crossing – much less painful and infinitely easier than the first, but longer and still severely testing the tired legs and the quality of the tread on our trail shoes.

END IN SIGHT
The final 10km or so were done on secluded single track through a stunning part of our awesome province. Our jokes had now ceased altogether (which was not a bad thing), but finally, with the end in sight, nothing else mattered and we crossed the finish line on Cumberland Reserve, three very tired but happy men. A top 50 spot was ours! Mike came in 20th in a time of 10:03:43; Rich and Guy came in tied 25th in a time of 10:38:37. All in agony, but all as happy as could be.

Special and huge thanks goes out to our trusty Sherpa PJ (The Trail Father) who plied us with food, drink and encouragement, and whose jokes were of a high quality all day.

DONOR DRIVE
As it stands today, we have raised enough funds to help 75 kids. Having said that, we are still pushing for last-minute donations. Thanks to everyone who contributed, your gift of giving will bring an immense amount of joy to those that really need it. If you would like to partner with us, please feel free to contact us so we can share our vision with you. For more info contact Richard on 071 2400 547 or on rallen@tentersa.com.