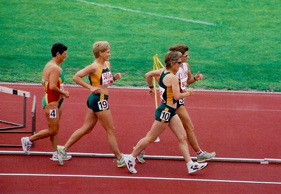 In 1991 at the age of 36, I was a mother of three young children and an occasional smoker. In July of that year, I was persuaded to join The Run/Walk for Life (RWFL) programme by a family member in order to stop smoking and it didn’t take long for me to be hooked. Something about exercising outdoors, walking the beautiful streets of Johannesburg, admiring the gardens and seeing the seasons change, as well as the camaraderie of talking to fellow walkers, made this an entirely pleasant and rewarding way of spending time. Up until that point, I had always played team sport and did not consider myself very competitive, but I soon discovered my competitive spirit.

I sort of knew how to race walk, but I realised if you wanted to go fast and be competitive, mastering the proper technique really is the only way to do it. Luckily, I picked it up easily and I really embraced the rhythm of walking. I did my first 10km road race on 10 October 1991 in a time of 71 minutes and I was the second walker home. Kay Cotterell, my RWFL branch manager then encouraged me to go to a clinic organised by Norman Janet, a local race walking expert. He coached me for two years and worked a lot on perfecting my technique and encouraging me. At the end of 1993 I attended another clinic, held at the University of Johannesburg (RAU at the time). This proved to be a turning point in my walking career, because I met my second coach, Dawid van der Merwe there. ‘Oom Van’ had ambitious plans to make me a Springbok, and as he pointed out, I had left him very little time to do it.

CHAMPIONSHIPS, MEDALS AND RECORDS
In September of 1994, I walked for the then Transvaal team in the National Road Walking Championships in Cape Town and won the silver medal in the 20km walk, in a time of 1:57:28. In April 1995, at the age of 40, I earned my National Colours as part of the South African team at the 17th IAAF/Reebok World Race Walking Cup in Beijing, China. Even though we were completely outclassed by the amazing speed of race walkers from other countries, it was a most wonderful experience. I did my 10km race in a then personal best time of 53:35 and became totally committed to the sport of race walking, and highly motivated to discover just what my potential might be.

Since then I have walked all over my city, my country and the world, and have won 33 SA national titles, nine gold medals at senior (all ages) National Championships and 24 gold medals at SA Masters National Championships (above 35 years old). I have twice been the All Africa record holder for the 20km event after becoming the first woman in Africa to break 1:50 on a 20km in Durban in 1996, before breaking my own records when I walked a 20km in 1:43 in 1998 in Naumburg, Germany. I have also broken 18 South African national records and in 2000 I broke the World Record in the 45-49 age group when I walked a 5 000m track race in Oudtshoorn in 24:14.

As a Masters race walker, I have won 12 World Masters Championship titles in distances of 5 000m, 10km and 20km. I won my first world title in 1997 in Durban, two more in Brisbane, Australia in 2001, and a further two in Carolina, Puerto Rico in 2003. In San Sebastian, Spain in 2005, I won another title, and in Riccione, Italy in 2007, I won three more gold medals, before winning another three golds in Sacramento, California earlier this year. These accolades have been wonderful, but they are only moments in time. What is important for me is that I get out there nearly every day of the year to enjoy my walking and enhance my life.

2011 IAAF WORLD MASTERS CHAMPS
I attended my eighth World Masters Athletics Championships in Sacramento, California in the USA from 6 to 17 July. A team of 32 South Africans participated along with 4 800 athletes from more than 90 countries, in a full track and field programme as well as cross-country, road race walks and the marathon.

Sacramento was in the midst of a heat wave and we raced in temperatures of over 40 degrees. I approached my races with caution to handle the heat and make sure that my technique was acceptable. There were 27 walkers in the 5 000m race (women 55-59) and I won in a time of 27:05. The 10km road walk was around a park and was shady with lots of beautiful trees, but with quite a steep camber. I was pleased with my winning time of 54:58 against 23 other women and a new SA record for age 55-59. At the 20km walk, my legs had not fully recovered from the 10km and we were walking on the same route, so this time I really struggled with the camber, but out of 11 women in my age group, I won my third gold medal in a time of 1:56:46.

WALKING TO A BETTER LIFE
I believe that the quality of my life has been greatly enhanced by exercise. Physically, my health has improved in so many areas. My asthma is under control, my lungs are better than ever, and my medical practitioners are constantly impressed by my heart rate, blood pressure, bone density and the consistency of my weight. Not to mention my dramatically improved energy levels! Mentally, it has enabled me to have a significantly improved positive outlook on life due to the sense of empowerment accomplished by achieving exercise goals on a daily basis. It has also given me a sense of being in control of my life and responsible for my choices.

I am passionate about walking and race walking, and became the coach at the Wanderers Club because I wanted to give back to the sport that has given me so much. I really enjoy seeing my walkers grow from strength to strength and achieve their potential. I advise potential race walkers to join a club that has a walking section with its own coach, because it is much easier and much more fun to learn the technique in a conducive environment. A strong self-esteem is also required, as runners are prone to pass smart comments when you pass them on the road and you are walking faster than they can run, but many more will give you a compliment and show their respect for what you are doing. Once you get the hang of the technique, you will get a great deal of enjoyment from race walking. Besides that, there are all the fantastic physical benefits, as it really does tone the whole body.

LIFE LESSONS IN WALKING
My walking career has had good times and bad, and I have learnt from both. There are days when I don’t feel like going out and sometimes I don’t, but often when I override the ‘I don’t feel like it today’ feeling, I really get to enjoy the training session and feel better for the rest of the day. Experience has been a great teacher and I have grown and changed my attitude towards racing over the years, from the early days of pressure and expectation, to expecting to have fun out there when I race these days. I am excited and enthusiastic on the start line about how is it going to turn out today, and I often reflect in races that I am so blessed to be able to do what I love doing, and in such wonderful natural settings.

Being outdoors everyday and taking in the fresh air, the blue skies and the wonder of nature (even in an urban setting) has taught me so much about the human spirit. I can’t help but be uplifted and energised from walking. It has allowed me to grow and to challenge myself in so many ways, and the journey of each race has been insightful and revealing. Training and racing have brought a lot of joy into my life and really added much value to my life. It has given me a positive outlook, taught me patience, discipline, humility and how to take risks, and made me realise how resilient I am. I enjoy taking myself to “my edge” and see each race as an opportunity to find out how well my training programme is working. I am committed to giving my best in training and in racing, and my ultimate goal is to pursue excellence. If I walk away from a race knowing that I could not have gone any harder, then I am satisfied, no matter what the outcome, and this is really my biggest achievement in walking.

Sport has taught me so much about life, including the ups and downs of both, and on reflection, it has been an amazing journey over the last 20 years. I am so grateful for my good health, and the wonderful support I have received from my husband, children, extended family and friends, as well as my great team of coaches, physiotherapists, massage therapist, Pilates instructor and Tai Chi teacher, who have all contributed to my success.