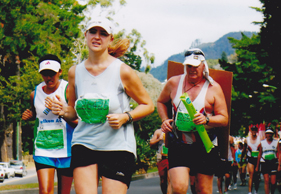 Robert and Cheryl of Pinelands AC have each done between 20 and 30 half marathons since both took up running in 2005, and they usually go to races together, but once the gun is fired, they set off at different paces. Robert (35), a self-employed IT specialist, has a PB of 1:28; in contrast, Cheryl (29), a credit controller for Medicross, has a best of 2:13, also set in Knysna this year. However, despite the difference in their normal racing pace, they plan to run the Cape Town Marathon together, with Robert slowing down to stick with his wife the whole way.

“I like stretching out my legs in shorter races, but with this being our first one, we want to do it together. I can see myself doing more marathons, but not for fast times, more for the lifestyle. That’s why I am very comfortable running it with Cheryl. I like running with her, not just because I feel she is safer, but also because I like spending time with her, doing things together.” Cheryl picks up the story here. “I wanted to run my first marathon in 2009, but got bronchitis just before the race, and couldn’t recover in time. Now I feel more experienced, and my training has also been more consistent, whereas two years back I had no set plan. I knew I had to start early in my training for this, so I’ve been following Tim Noakes’ 26-week training programme.”

BEYOND THE MARATHON
This first marathon is just part of a bigger picture for the couple, as both are currently re-evaluating their career paths and setting new goals for themselves – and they see conquering the marathon as one symbolic stepping stone to achieving this. Robert says he is trying to take his career to the next level. “I’m bouncing off the wall after doing a business course through the University of Stellenbosch School of Business and am more aware of opportunities out there. I recently met with a UCT lecturer to help me work out a business model to take my business global, while still focussing on local underprivileged communities.”

Meanwhile, Cheryl says she doesn’t want to be stuck behind a desk anymore. “I want to get into environmental tourism, where I can use one of my passions, bird-watching, in my work, so I’m planning to become a nature guide here in the Western Cape. Therefore, we both have a philosophical side to wanting to do this marathon, because setting ourselves targets and achieving them helps us to set even bigger goals in life, and then go achieve them.

Within a few hours of meeting, Jeanette Wearing and Liezel Coetzer knew they would not only be great friends, but also great running partners, because their goals and their stories are so similar. – BY SEAN FALCONER

Just a few weeks ago, Jeanette Wearing was introduced to a work colleague’s girlfriend, and as soon as she started talking to Liezel Coetzer, she knew she had found a kindred running spirit, despite Liezel having done several ultra-marathons, including two Comrades, while her longest run was only 21km. Despite this, they are now in training to go after their goal together of trying to break two hours for the half marathon.

Jeanette (46) works as a real estate agent for the Leapfrog franchise in Gordon’s Bay, which is co-owned by her husband Kevin, an experienced runner of 15 to 20 years. “Kevin inspired me to start running three years ago and join him at Strand Athletic Club, and I’ve now done about 30 to 40 half marathons, with a best of 2:27, but I want to get that down to under two hours by the end of February. Problem is, I’ve never really trained before, just done shorter runs, and mostly on the treadmill, so I’m going to use a training programme for the first time.”

Liezel (32) is a financial manager for City Sightseeing, the company that runs the open-top bus tours of Cape Town. She lives in Blaauwberg, having moved down from Johannesburg in 2008, and has been running for four years, with a half marathon best of 2:10 and a marathon PB of 4:55. She’s also run the Comrades in 10:58 (down) and 11:35 (up). “I want to bring my 2012 time down to between 10:00 and 10:30. To do that, I have to do lots of speedwork, which is why I want to improve my half marathon PB to a sub-2:00. To achieve that, I’m going to do more club runs with my Atlantic Triathlon Club, but also do more runs with my new training partner here.”

PAINFUL MEMORIES
Besides sharing a goal time, the two friends have similar painful memories of their first half marathons. Jeanette says Kevin convinced her to enter the Two Oceans Half three years ago, but said they should first run the Kleinmond Half as training. “Everybody warned me it was a nasty race, and I think I cried more than I ran in that first race, but afterwards I was ecstatic. Problem was, within half an hour of finishing, I could barely move!” Liezel’s debut half was even more sudden: A friend who had entered the Two Oceans Half dared her to also run it – the night before the race! Liezel accepted the challenge and finished without problems in 2:40, but just remembers being sore afterwards. “I couldn’t walk for days! And I live on the third floor of a building that has no lifts! But I enjoyed the race so much that I began running more 21s, and fortunately ended up far less sore afterwards. Not even Comrades made me as sore as that first half!

Both women now say they are confident of achieving their target time, because after those first painful half marathons, and in Liezel’s case the Comrades as well, they think they can overcome any challenge. “Putting our goal in writing does put pressure on us, but it will also motivate us and help us to remain committed,” says Liezel.