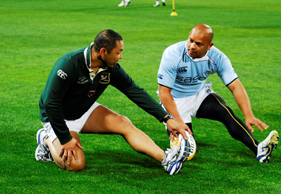 Earlier this year, Media24 Newspapers rugby writer Adnaan Mohamed was in Pretoria to cover the Bulls-Stormers Super Rugby match. On the Saturday morning of the match, while all his fellow journalists were sleeping late, he drove out to the Hartbeespoort Dam and ran the Old Mutual Om Die Dam ultra. “When I got to the game and told the other journalists I had just run 50km, they all thought I was crazy, but I needed the mileage for my Two Oceans and Comrades training. I always check the calendar for races when I travel to another city, or overseas.”

Adnaan says he likes to get in a morning run, because if you leave it to the afternoon it often just doesn’t happen. That’s why he regularly runs to the sport venues where he will be covering an event. “I always fit running into my work schedule. I send dry clothing and my laptop and notes with other media guys, so I can run in, shower and then work. Like when I covered the National Swimming Champs in Durban and ran 17km from my hotel in Umhlanga to the pool each day. My colleagues sometimes worry that I won’t make it, but I always get there.”

CHANGE OF PACE
Adnaan (44) began his working career as an English and Afrikaans teacher, but always harboured a passion for writing and began freelancing as a journalist in his spare time. In 2005 he got his big break when Die Son went daily and asked him to cover rugby for the newspaper. “It was hard to leave teaching after 16 years, but I felt I wasn’t doing justice to the kids any more and realised it was time to go.” Within months he was on his first Springbok tour, to Argentina, and his running kit went with.

“I ran every day while I was there, because that’s the best way to see a place. I came back on the Wednesday, ran the Winelands Marathon on the Saturday, and the next day I left for London for the end of year tour, and soon I found myself running in the snow in Paris. Later, in 2008, I covered the Olympic games in Beijing for the Media24 group. It was one of the highlights of my career thus far, and I have never worked so hard in my life, but I still managed to run on the Great Wall of China. It was an amazing experience.”

JOINING IN
In 2009 Adnaan found himself in Perth, Australia, covering the Springbok Tri-Nations tour. Having been briefed by Sport24 to write an online tour diary, and being a fit ultra-marathoner and former rugby player himself – he has done 10 Comrades and 11 Two Oceans, as well as two Cape Odysseys (211km over five days), and played rugby from age eight to 38 – he approached Springbok coach Peter de Villiers with the idea of joining a training session and writing about what it felt like to train with the Boks. “No journalist had ever done this before, but Peter wanted to bring the players closer to the fans, so he said I could join the warm-up and stretches. Next thing I knew I was running through passing drills with the team and ‘scrumming’ against prop Tendai ‘Beast’ Mtawarira. Of course, I was wearing takkies, and I joked with Beast that he’d have been in trouble if I was wearing studs!”

A year later, in Edinburgh, Scotland, Adnaan was following the Boks’ UK tour, and on the first day in the city he caught a taxi from his hotel to the training ground. “I wanted to still get my daily run in, so from the second day I started running the 7km to the ground and back every day. That led to me joining their warm-up sessions, and again, what an incredible experience!”

NEXT STOP, NEW ZEALAND
Adnaan will be covering the Rugby World Cup in New Zealand in September/October, which he says will be a big challenge. “Two months away from my wife and kids will be hard. I interviewed Gary Kirsten the other day, about his time in India coaching their national cricket side, and he said that when he spends time with his kids, he makes sure there are no phones to interrupt them. I try to do the same by spending as much time with my kids as possible, and one of the things we do is gym together. It’s a hard line of work that requires a lot of sacrifice, but I’m living my dream to travel, to write and of course to run.”