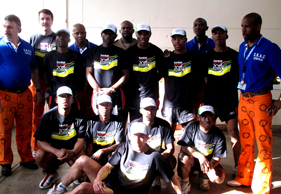 It’s close to 9am on a Thursday morning in one of South Africa’s biggest prisons; the Pretoria Central Prison. The sights and sounds inside the four walls of the prison are exactly as one would imagine: Huge keys noisily locking and unlocking several thick wooden and steel doors, stern-looking prison wardens going about their day while several orange overall-clad prisoners each concentrate on their daily tasks while curiously looking at the bunch of visitors entering their ‘home’ for a couple of hours.

After a thorough body and equipment search, we are allowed further inside the prison and led through several sections towards the gym and exercise area. Walking through parts of the prison and past the dark brown brick walls, concrete floors and many barred sections, the first thought crossing one’s mind is: Freedom has a new meaning. However, after making our way up a narrow stairwell we reach the gym/exercise section of the prison and once inside, you could easily be forgiven for quickly forgetting that you are inside one of the country’s biggest prisons, where some of the most dangerous prisoners are housed.

SETTING THE SCENE
In one end of the gym a prisoner had set himself up as a DJ and was playing music and setting the scene for the ‘race’ which was soon to start. Against a wall, 12 neatly lined treadmills were set up for the 50km City2City run, followed by another 17km which the prisoners decided to add on in recognition of Madiba. (The number ‘67’ is symbolic because it is the first part of Nelson Mandela’s 67-4-4664 prison number on Robben Island, and central to the 67 Minutes for Madiba charity drive each year.)

The prison runners were also joined by a selection of top athletes from Bonitas Team Elite and the Nedbank Running Club, who were all ready to test their skills against the Pretoria Central Prison team on treadmills. Some of the prisoners were tackling the distance solo while others ran in relay teams.

RUNNING REHAB
Nick Bester, former Comrades Marathon winner, was there to support the prisoners and elite runners. He has supported the running team at the prison for more than 10 years, alongside the team’s chairman and runner Wolfram Abbott, nephew of boxing legend Jimmy Abbott. Most of the runners only began running once they were in prison and Nick coaches them regularly, often by telephone. He has seen firsthand how running has become an important part of the prisoners’ daily lives and rehabilitation.

“These guys have been training for many months in preparation for this event. Their days revolve around the training and it’s also an incentive for them to stay healthy and avoid behaviour which could impact their performance, such as smoking. Anyone can make a mistake and these prisoners are serving lengthy prison terms for their crimes. Running provides an outlet for them and it is part of the rehabilitation process, giving them some hope for the future,” says Nick.

The prison team trained on a 200m route inside the prison walls and more recently on treadmills donated by private individuals. Nick also supplies them with running gear, including shoes.

RUNNING DREAMS
As most road runners know, running on a treadmill, especially for longer distances, can be difficult, tiring and most of all, boring! But the prisoners were all determined to show what they are made of and all said that running has kept them sane in prison.

Hendrik Slippers, a member of the Offenders’ Sport, Recreation, Arts and Culture, who helped to organise the event, says the prison has its own running club called Central Boys Club, with about 50 members. “All of us in here did something wrong, but we can’t go and just lie down while in prison. Sport helps with discipline and takes people away from bad things,” says Hendrik.

Wolfram proudly shows his running logbook that he has kept over the years in prison. In 2005 he clocked 1535.8km, in 2006 another 2004.5, in 2007 he covered 1007.4km and in 2008 he managed 1241km. In 2009 he ran 802.1km and last year 1004.6km. Wolfram was instrumental in starting ‘races’ in the prison after phoning Nick a couple of years ago and asking for advice on running. “When I don’t run, I can feel something is missing. Sometimes it is difficult to run on a treadmill for so long but we all still do it and enjoy it. Some weekends we run up to a marathon distance on a treadmill. My biggest dream is to one day run the Comrades.”

THE RACE
Wolfram, Sipho Khumalo and Stefaans Coetzee ran the full 50km Bonitas City2City Marathon and then relayed for the last 17km. The rest of the team broke into three relay teams which completed 22km each. They were accompanied by Nick, as well as Nedbank Runner Sibusiso Nzima and Bonitas Team Elite runner Aaron Gabonewe. While Nick’s relay team won the 67km race in just 3:31, solo runner Wolfram came a close second in 3:35.

Director of Offenders’ Sport, Recreation, Arts and Culture, Fezile Sipamala, attended the event and was touched by the positive effect it had on the prisoners. “The event not only boosted morale at the prison, but has proven a good example of how sport can help prisoners channel their energy towards a positive outcome.”

Nick was delighted with the performance of the athletes on the day. “They have worked so hard for today and achieving their goal has given them some hope for the future and something to look forward to when they finish serving their sentences and return to normal life. It was an uplifting and emotional day for us all.”

The team plans to run more marathons in the future and Nick says more inmates in the prison are becoming interested in taking part in the training and working towards this goal. “We hope that Madiba, as a former prisoner and keen sportsman, would be proud of what these men are trying to achieve,” he says. The entire team signed a birthday card for Madiba, which was delivered to him.

The Pretoria Central Prison athletes also recently completed the Two Oceans 56km marathon, also on treadmills. The runner with the best time clocked in at 4:05, missing a silver medal by just five minutes.

Bonitas City2City Ultra-marathon
With just two months to go before the start of the 2011 Bonitas City2City Ultra-marathon, many of South Africa’s top runners have started intensifying their training for the event. Last year’s defending male champion, Zimbabwean Prodigal Khumalo, is back this year to defend his title. Prodigal, who is part of the Mr Price team, finished the race in 3:11:14, just 24 seconds ahead of countryman and Nedbank athlete, Brighton Chipere. The top female runner from 2010, South African Riana van Niekerk, whose finishing time of 3:34:40 beat Julanie Basson’s 3:45:32, also has her eye again firmly on the top prize.

The Bonitas City2City Ultra-marathon boasts total prize money of R200 000 and the country’s top running teams, including Nedbank, Mr Price, Toyota, F1 Bluff Meats and Bonitas, have begun training in earnest, aiming to set themselves apart at this year’s event. Bonitas Team Elite’s Farwa Mentoor says she has set her sights on gold, having finished fifth in the women’s category at the 2011 Comrades Marathon and being the first SA woman home.

But it’s not only the top runners who are getting in shape for the big day. Runners entering the 21km and 10km City2City races should begin training as soon as possible to get the most out of their race day. A specially designed training programme can be downloaded on www.city2citymarathon.co.za, along with valuable tips on how to prepare for the big event.

Entry forms can be downloaded from www.city2citymarathon.co.za or completed online at www.entrytime.com. Entry forms and race numbers for the 2011 City2City Marathon are now also available at Sportsmans Warehouse and other selected sports stores. Entries received before 1 September for all distances will receive a commemorative race T-shirt and goody bag. Enter online and you also stand the chance of winning a package trip for two worth R120 000 to run the New York Marathon.